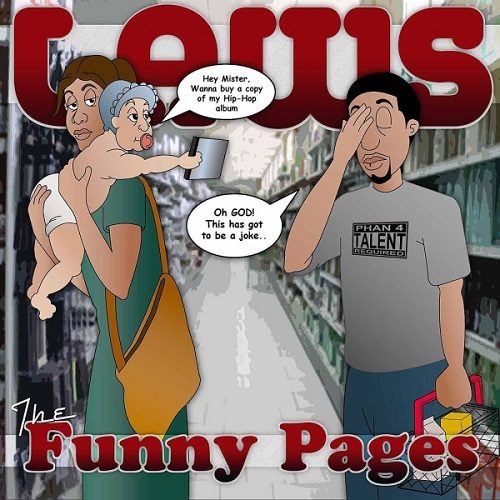 Emcee Laws refers to Kanye West more than once on “The Funny Pages,” which makes a lot of sense. His album shares a similar vibe to that of Ye’s, both in the tone of the album and his light-hearted approach (in fact the dude at the end of “Candy Rapper” even sounds like the Bernie Mac knockoff from the skits of Ye’s albums), but lyrically he’s a different animal. Laws is one of those truly dexterous emcees. Sometimes he sounds a little like Tonedeff, sometimes he sounds a little like Lupe. He’s sarcastic, funny and honest – a recipe that reads like success, but has failed before.

The beats are mostly energetic and melodic, but somewhat been-there, done-that. Mostly sampled from ’70’s soul, they share similar characteristics to certain big name producers, but do little to claim anything for themselves. Laws does more than follow suit with lively emceeing of his own. Hitting on a broad range of topics, he’s full of wit and has quotables for days, but doesn’t deliver as much in personal narratives as he does nasty one liners. The guest appearances range from hilariously awful (see “Everyone’s A Critic” to rather outstanding (see “Young and Fly”).

Laws is certainly a talented rapper, one proud to say he upholds the traditions of thoughtful emcees of the past, while still trying to give you a taste of the future. The quotables on “110%” are definitely abundant – “George Bush doesn’t care about black people, and Lord Zeba doesn’t care about wack people. You thinkin with your dick, you can beat it ’til it’s useless, so I find a Nubian queen and skeet into the movement.” The satisfaction of such one liners is fleeting next to a well thought-out story, but it’s still effective. “Speak Your Mind” is like a toned-down version of an Immortal Technique rant, which could be good or bad, depending on your point of view.

Producer LA does well in providing Laws with a suitable canvas. “Feedback” is a banger that screams Just Blaze with awesome electric guitar and blaring organs, and “Rapping Guy,” with its sleek strings, is simply cooler than a polar bear’s toenail (perfect for Laws to pwn the “other” guys – “rappers dribblin’ on themselves like 76ers”). “Must Be A Hit” ironically sounds almost exactly like a trademark Kanye beat, and the song is a clear satire of the industry – “if it looks like a hit, and it feels like a hit, and it sounds like a hit, then it must be a hit.” Meanwhile, beats like that of “Set You Free” take a shot at upbeat soul, but deliver more bores than head nods. More often than not, the beats rely too heavily on the strength of the sample, as the percussion is lackluster, to say the least.

“The Funny Pages” takes minor hits in minor flaws, mostly technical, and the overall product is more than tight. While Laws delivers in impressive wordplay and tongue-twisting flows, he could afford to open up more with his lyrics.