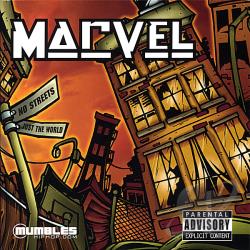 Marvel :: No Streets (Just the World)

According to the album’s attached blurb, Canadian hip hop seems to suffer from something akin to an identity crisis â€“ this could be said about many a country around the world. The crux of the matter appears to be the ‘Americanisation’ of a nation’s sound, as opposed to finding their own way â€“ an accusation routinely thrown at UK artists (less so now, however). Marvel, the Toronto-based rapper, has assorted a production team of Canada’s finest in order to put together a project that encapsulates the sound of his city streets. And the result is a pretty special musical soundscape…

Following a short intro, the album launches into ‘No Streets’ â€“ and I must admit that it took me an hour to move onto the third track! The Kardinal Offishall-produced banger is the perfect way to kick off proceedings, contrasting overbearing piano-driven melody with understated production â€“ the result is an exceptional cut. Marvel himself delivers well enough, and gives a taste of his talents to come over the rest of the LP. ‘Skankin’ follows, and the track shifts through the darkness â€“ and halfway through the song, the MC suddenly transforms into an incarnation of 1999-era Slick Rick. It is bizarre, but keeps the listener on their toes â€“ and the Saukrates beat is superb. Darkness follows with the underwhelming ‘Time of the Signs’, but the funk returns immediately on the brief ‘Mission One’ â€“ helped by sterling input from guest Arcee. A lush Pete Rock-esque beat produced by Mr Attic laces ‘IT’, providing one of the most memorable cuts on the album. And clearly Mr Attic is a talented dude, as he transports back to the 1970’s effortlessly on the next track, ‘Hold On’.

My suspicions that the album is a brooding, nocturnal listen were further confirmed a couple of songs later when K-OS guests on ‘Follow Me-Flip’, providing another standout cut. The LP is wonderfully subdued â€“ and like a vampire would probably evaporate if exposed to daylight. This is purely a night-time joint, perfect to chill or drive to. The final official cut is the random instrumental track ‘Palm Wine’ â€“ it really shouldn’t work, but somehow provides the perfect ending. Three bonus tracks follow â€“ ‘Throw This Ball’ should really have been thrown out; ‘Red Light District’ musically fits into the theme of the album flawlessly; and ‘Shituations’ is solid, but perhaps unnecessary.

If I haven’t mentioned much about the MC thus far, that reveals my ambivalence towards him â€“ he is pretty tight, with a pretty good flow, and pretty good lyrics. He is neither wack nor exceptional â€“ Marvel is just there. And that’s OK â€“ because this album is really more about the music. If Marvel was more or less of an MC, it would disrupt the balance of an excellently put-together musical treat â€“ it seems as if his real talent is putting together this album, constructing an almost flawless ear drum experience. If this is what Canada can produce sonically â€“ without even breaking stride â€“ then people need to look towards T-Dot more often for inspiration.