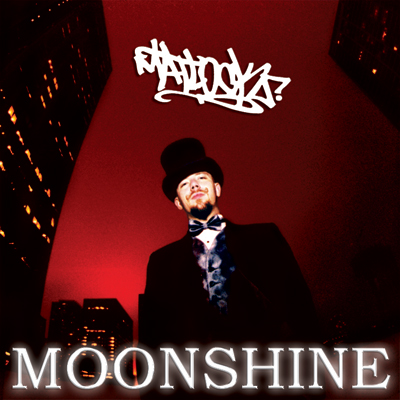 Seeing as Chi-Town is growing in profile, seemingly by the minute, it seems only fitting to check out the new offering from one of Chicago’s own, Matlock. It is even slated for release the very same day as Kanye West’s third offering, “Graduation” and it is not even any kind of joke to suggest that this MC would genuinely do any Kanyezee LP credit with a guest appearance. He is a quite outstanding lyricist, potentially of the highest order. Sounds like a mildly psychotic claim, I know what you’re thinking. BUT remember hearing ‘Touch the Sky’ for the first time, and wondering who Lupe Fiasco was? So give ‘Moonshine’ a chance.

The intro is one of the lushest I’ve ever heard and as soon as Matlock starts rapping over the opening track ‘Liven Them Up’, you know you’re in for something special. It is wonderful to hear a modern MC craft his lyrics with such care, whilst paying attention to flow, cadence and breath control. One can certainly hear echoes of Eminem circa the ‘Marshall Mathers’ era in tracks such as ‘Bury My Body’ NOT because he is a white MC either! It is more to with the cleverness of the wordplay, the venom with which he spits and ability to arrest the listener. Then, Matlock follows it up immediately with a track like ‘Don’t Sleep’  the kind of song that even Slim Shady couldn’t pull off. He’s got swagger to burn, an excellent voice and even solid choruses. Time and time again throughout the album, including the title track, you’ll find jewels dropped indiscriminately: “I spit it for the kid’s sake, the sober and the shit-faced/The dirt-poor, my sick crew, the city and some inmates”. He must possess the breath control of a deep-sea diver on this track to imagine him spitting couplets like that in quick succession for 8 or 12 bars without pause. What is surprising is that for such a high percentage of the time, his complex and intricate shit STILL makes perfect sense… That is a hard skill to pull off.

It’s all love for the MC, unfortunately, the same cannot be said for the production side of the album. Kaz1 handles eleven of the albums fifteen songs it is always a risk to hand over so much control to one producer, be it Kanye’s fumbling of Common’s ‘Finding Forever’, or less well-known dudes like Kaz1. It can pay off, and in theory make perfect sense, helping the continuity of the LP  but ‘Moonshine’ is hit and miss musically. Positives include the aforementioned title track and ‘Don’t Sleep’, even the posse cut ‘Quatro Muchachos’ but the ball is dropped more often than not especially when compared to the jazzy ‘This Music’, laced by scratch genius DJ Babu (you can hear the difference almost immediately), or the strange hypnotic melody of ‘Live at E.V.’ with DJ Grimmace behind the boards.

It is a crying shame, as an authentic and charismatic MC such as Matlock honestly deserves a bigger stage and monster beats to ride over. With the right soundscape and promotion behind him, he could prove a big success. He needs beats not even to inspire him, he needs no help on that count. No, simply to inspire the listener. While I just about enjoy listening to the album to hear what Matlock is going to say next, the music gets in the way. I take my hat/cap off to this incredible rap artist, but screw it forward this review to Kanye and see if he’s got a few beats spare next time.