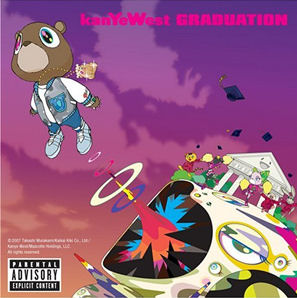 And so Mr. West’s education comes to a close. The third instalment of his epic series is here â€“ and before he can get a ‘Good Ass Job’, he must graduate from college (even though he dropped out… me neither!). It is no exaggeration to say that this is one of the most eagerly anticipated albums in recent memory â€“ hip hop or otherwise. Kanye has truly conquered the worlds of music and media, with pretty much everyone knowing who he is, even if they don’t know his music. Since his messy but charming sophomore effort ‘Late Registration’ propelled him to new heights, the Chicago native hopes that ‘Graduation’ blasts him from the album cover rocket up to the stars. But, like Icarus before him, Kanye may have flown too close to the Sun for his own good…

The album starts strongly with ‘Good Morning’, a simple and soulful beat providing a backdrop for the 30 year-old to drop jewels on his “dissertation”: “Good morning, look at the valedictorians/ Scared of the future while I hop in the De Lorean”. Hang on â€“ where is the classic Bernie Mac introductory skit? I guess this is the ‘serious’ album â€“ no time for joking around, especially when you’re trying to prove yourself as a legendary MC. In fact, there are no skits at all â€“ one immediately notices how tightly the songs are sequenced together, with ‘Champion’ launching as soon as the opener stops. The short song proves Kanye’s evolution as an incredibly charismatic rapper (perhaps to a lesser extent, a valuable lyricist), as we are swept away by the combination of the artist and a celebratory Steely Dan sample:

“When it feel like living’s harder than dying
For me giving up’s way harder than trying
Lauryn Hill said her heart was in Zion
I wish her heart still was in rhyming
Because who the kids gonna listen to, huh?
I guess ME if it isn’t you
Last week I paid a visit to the institute
They got the Dropout keeping kids in the school”

A sequence of four singles follows, with the mega-hit ‘Stronger’ starting things off, complete with updated drums provided by Timbaland especially for the album â€“ the difference is subtle, but welcome. Without doubt, it doesn’t quite compare to the original Daft Punk effort, but it has certainly grown into a special song in its own right. In the build-up to the album, Kanye has spoken of his desire to make songs that people can connect with, that they can personalise â€“ and while it is presumptuous to call ‘I Wonder’ a future single, it seems like a natural selection that fits into this ethos. Loosely documenting the miscommunication between himself and pretty much everyone, it contains enough buzz-lines and Shakespearian open text to hook in the listener (“Do you even remember what the issue is?”). Yet, not for the first time, his ego gets in the way of delivering a beautiful and impassioned plea â€“ he so squarely aims for ‘stadium anthem’ territory that by the end of the song, forgets about us and our ‘everyman’ struggles, instead falling back on his blustery bravado. The guilty pleasure ‘Good Life’, complete with vocoder-plagued T-Pain, fails to inspire due to the underwhelming chorus â€“ the song’s heart is in the right place, but the execution lets it down. The same cannot be said of the brilliant ‘Can’t Tell Me Nothing’, which manages to succeed on every count that the previous three songs can’t quite live up to. Beat, verses, chorus â€“ it’s all classic stuff:

“I had a dream I can buy my way to heaven
When I awoke, I spent that on a necklace
I told God I’d be back in a second
Man, it’s so hard not to act reckless
To whom much is given, much is tested
Get arrested, got some chilli, get the message
I feel the pressure, under more scrutiny
And what I do? Act more stupidly
Bought more jewellery, more Louis V
My momma couldn’t get through to me
The drama, people suing me
I’m on TV talking like it’s just you and me
I’m just saying how I feel man
I ain’t one of the Cosbys, I ain’t go to Hill-man
I guess the money should’ve changed him
I guess I should’ve forget where I came from”

The late addition tracks ‘Barry Bonds’ and ‘Flashing Lights’ sandwich the album’s nadir â€“ the iPod delete-worthy ‘Drunk & Hot Girls’, featuring Mos Def (who, frankly, sounds offended to be there). ‘Barry Bonds’ is the audio equivalent of going to speed-dating events with an ugly friend â€“ featuring an under-par Lil Wayne, Kanye comes off a much more attractive proposition. ‘Flashing Lights’ is a stunning synth-driven highlight, and saves the albums crucial middle core from oblivion. Another classic starts off the closing sequence, ‘Everything I Am’ â€“ for some reason, Common passed on this soulful beat (as Kanye states in the first few bars). His loss is Mr West’s gain, and combined with some ever-fabulous scratching from the legendary DJ Premier, it proves to be poignantly successful. Another song that was originally slated for release on Common’s latest LP, ‘The Glory’ is a solid shit-talking opus and more in keeping with the sped-up samples of Kanye’s past.

The final two songs provide some of the psycho-drama that keeps the internet forums buzzing. ‘Homecoming’ features Chris Martin of Coldplay, and reinterprets ‘I Used to Love H.E.R’ â€“ the seminal 1994 Common single. Its success is almost irrelevant until the final track ‘Big Brother’ explains that Kanye and Jay-Z (his ‘big bro’) had a falling out over Jigga’s decision to include the Martin-featuring ‘Beach Chair’ on his comeback album, ‘Kingdom Come’ â€“ after West had told him he was going to use the Coldplay singer on his own LP. West was enraged, and their relationship suffered as a result â€“ the song chronicles the ups and downs of their relationship over the past six years, forming a fascinating episode of fly-on-the-wall reality: “I told Jay I did a song with Coldplay/Next thing I know, HE got a song with Coldplay/Back of my mind, I’m like, Damn, no way!” And what must hurt Kanye even more is that Jay’s song with the singer is SO much better than his own track: ‘Homecoming’ is a corny 1970’s impersonation, localised to Chicago; ‘Beach Chair’ is a rare, inspiringly open and honest introspection that, ironically, listeners can relate to even more.

The album is finished, and you may not be all too impressed â€“ fear not, as it is a grower, demanding repeat listens. Certain sonic touches are subtle enough to go unnoticed; a few clever metaphors will only click on your third or fourth listen. But it isn’t enough to save ‘Graduation’ from paling in comparison to his previous two efforts. Two particular flaws decimate the albums potential: a lack of huge singles to follow on from ‘Stronger’; and an absence of fun and humility. In his quest to be taken seriously as an MC, Kanye has forgotten that the listener still requires entertaining â€“ and a sense of humour failure dovetails with his overly-defensive ego. He has taken a risk in every aspect of this album: no skits, a more electronic sound, a smaller selection of songs, fewer guest rappers. It is commendable, and could well have paid off, but the risk falls flat. I mentioned in the opening paragraph that ‘Late Registration’ was messy but charming â€“ well, ‘Graduation’ is neat, tidy, formal, but lacking in personality (kind of like an actual graduation ceremony). He’s graduated, but not with flying colours.