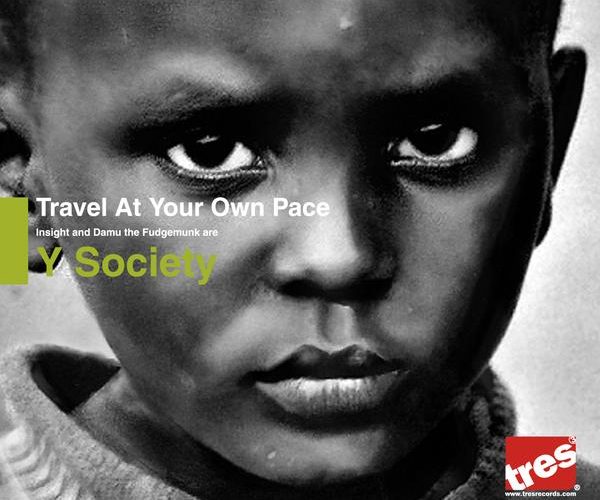 Y-Society :: Travel at Your Own Pace

Last year Rawkus’ duo Naledge and Double-O created the group Kidz In The Hall to release of “School Was My Hustle” which promised to reinvigorate rap music with the jazzy sounds of the genre when it flourished in the mid 90’s. Now, a year later, Y-Society on the lesser known Tres Records collaborate Insight and Damu the Fudgemunk with a similar goal in sight and with nearly as good results.

It’s refreshing to hear artists embrace the sounds of old and originate it in their own vision. Ironically dual threat, rapper/producer, Damu is a Sophomore to the rap scene who broke onto the scene in 2006 on Rawkus/Glow-In-The-Dark Records, so the aforementioned group could have very well been his muse for this disc. Damu’s partner has been known for work behind the boards but he takes all but one track on this LP. Meanwhile Insight is commonly associated with other underground mainstays like Brick and Landspeed records. The two create a solid chemistry and a cohesively funky sound complete with all of the ingredients of good backpacker music; positive lyrics, scratches, vocal samples and funky horn and drum beats.

After a decidedly goofy “Intro” that sounds like some kids show theme music the two follow-up with the repetitively titled “This Is An Introduction”. The track is a very good jump off for the album and artists indeed, with the following suiting lines compliments of Insight, “Yea, we keep it fly/ Work hard cuz we try/Name’s Y dash S-O-C-I-E-T-Y/Society the group in case your ass can’t spell”. The song rides out to the fading horns, cuts and most uniquely a classic rock sample believed to be taken from Creedence Clearwater Revival. Insight takes the bulk of the mic work and establishes himself as a capable Boston-based emcee but does not do a whole lot to differentiate himself from the typical East coast rhyme-spitter.

All groups and labels have grand ambitions for their releases and if their success relies on anything the lead single only takes backseat to raw skill and entertainment value. “Never Off (On & On) is the lead 12” which was actually previously released as a precursor to this LP. This is not a bad choice for a single by any means, but it seems a little too subdued to get a lot of spins in any musical environment that you will likely find yourself. It will have hip-hop heads reminiscing the sounds of J.Rawls of the Lone Catalysts. The chorus is hypnotizing:

It boils down to being just good, solid hip-hop music.

The B-side, “Dizzy” is better yet as it features a vintage soul sample that does a great job of harmonizing the track. The concept of the album title “Travel At Your Own Pace” is realized with the track that is conceptualized as a composition about rapping so fast that the sound barrier is broken. Unfortunately Insight isn’t going to make the Guinness Book of World Records with his rapid-fire delivery a la Twista, but he fares well enough and remains controlled in the lyrical exercise.

The group continues to prove their worth with concepts that are realized with nice lyrical content. “How Many” inquires about social, political and moral issues with great success. There is a real sense that the two are connecting to the listener and the song would serve as an extremely likable track on tour. Moreover, “Puzzles” explains how life fits together, despite its complexities like “a child runnin’ wild with an M-16”. It seems like Y-Society is usually working on a higher plateau than your average run-of-the-mill underground collective. Insight and Damu the Fudgemunk only really fail in the way that many rappers did in the mid 90’s. The album is so consistent in sound and style that it can get repetitive, especially considering the lack of a specific personality on the CD. It is a catch-22 as the two rarely stray from their tired but true formula as it keeps it from being a truly exceptional and creative work.

If you liked the Kidz In The Hall’s re-invention of the mid 90’s sound with “School Was My Hustle” last year, you will also find a lot to like about “Travel At Your Own Pace”. Y-Society represent everything there is to like about what is often considered ‘backpacker music’. Insight and Damu both have their hearts and rhymes in the right places, so go down to the record store and consider giving this a try–Go ahead! “Travel At Your Own Pace”.

Y-Society :: Travel at Your Own Pace
8Overall Score
Music8
Lyrics8