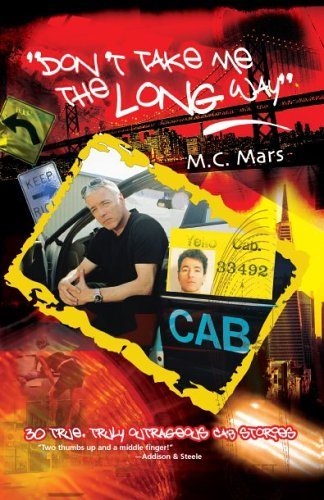 MC Mars is not your typical rapper. For one thing, he’s past middle aged. That’s right, MC Mars took up rapping well after his youth, mostly because Hip-Hop wasn’t around during Mars’ youth. Mars’ book, however, has less to do with Hip-Hop and a lot more to do with his life as an urban cabbie because before he ever gripped a microphone MC Mars was a taxi driver. His career behind the wheel lasted over twenty years.

According to Mars there are a handful of things everyone should know about taxi etiquette, the first being never to say “don’t take me the long way.” The phrase implies that you think the cabbie is untrustworthy for no reason other than he’s a cabbie, getting your ride off to a terrible start and, in the process, exposing a bit of yourself that isn’t too pretty. There are a few more rules that Mars goes over in the book, but the real juicy stuff, the real meat of the book, are the stories from the road.

Due to his position as a taxi cab driver, and the fact that one of his friends picked up George Clinton one night, Mars had the high honor of recording with the funk legend. This story is included in this book. Sadly there is another story that continues throughout the third section of Don’t Take Me The Long Way regarding an illness of Mars’ making the book more than just a collection of tales from the driver’s side, but rather a true look into a man; a talented man, an intelligent man, and a man who loves Hip-Hop.