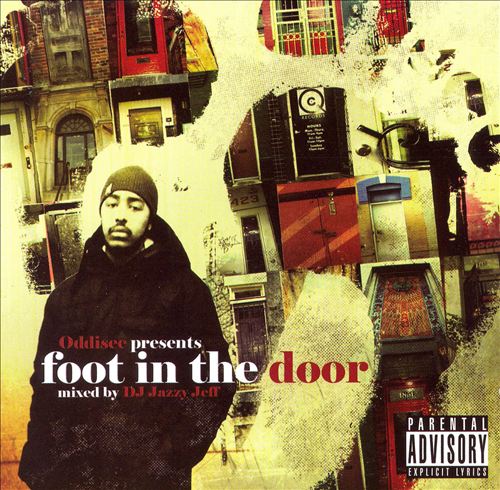 Oddisee :: Foot in the Door

You don’t hear Oddisee’s name too often. Oh he’s legit – down with the celebrated Low Budget click and a frequent collaborator with a number of esteemed artists (DJ Jazzy Jeff and Little Brother, to name a couple) – but he’s very much a behind-the-scenes guy. Sure, the same could be said for the majority of underground artists, but Oddisee has consistently proven himself on the mic and behind the boards, lending his talents to a considerable array of projects.

“Foot in the Door,” a 34-track suite mixed by the aforementioned Jazzy Jeff, is a scope into some of his finer work from the past few years. The compilation covers roughly four years of music, some familiar snippets, some never-before-heard material, but all carefully crafted and expertly chosen displays of Oddisee’s ability. With as many tracks, it’s fast-paced, but transitions well enough to be suitable for your listening pleasure, no matter the scenario.

Oddisee takes after fellow Low Budget mastermind Kev Brown in being a multi-talented force on both sides of a song – beat-making and emceeing. He’s a diverse producer, tapping a wide variety of sources to make his beats, ranging from eccentric to soulful to jazzy to funky, sometimes all in one song.. His fundamentals in percussion and bass lines are impressive, as he proves to rock average samples out of their socks time and time again. Guitar samples in particular – the “Intro,” “Such is Life,” “Musik Lounge,” “Real Music” and others take below-outstanding guitar loops, only for Odd to breath life into. Meanwhile he kills the piano tracks – “Quest to Find,” “Once Again” and “Boogie.”

Some of the better tracks Oddisee doesn’t even have a hand in the production. Kev Brown’s “Nitefall” bubbles with drunk piano keys and a looming bass line, while Nicolay’s “Foreign Exchange”-borrowed “The Answer” is an ambient highlight. Australian producer M-Phazes produces the showstopper in the form of “Industry Ills,” a Pete Rock-like banger complimented by gorgeous chimes and keys.

With a bit of a southern drawl (he’s from Maryland, don’t ask), Oddisee has a great flow and doubles as a nice emcee. Instead of trying to be a super-lyrical tongue twister, Odd would much rather spit the real – verbally comparable to the styles of Kanye West and Murs. The guest spots are just as nice – including nice verses from Kenn Starr, Asheru, Supastition and Freddie Foxxx.

Being accumulated from various projects, the overall listen is somewhat unorganized, even if that may contribute to the mix tape’s appeal. It still flows off the strength of Odd’s production and ability to glide over a track, and before you know it you’re at track 20. “Foot in the Door” covers a lot of bases, and is a great introduction to one of the quieter talents on the indie scene.