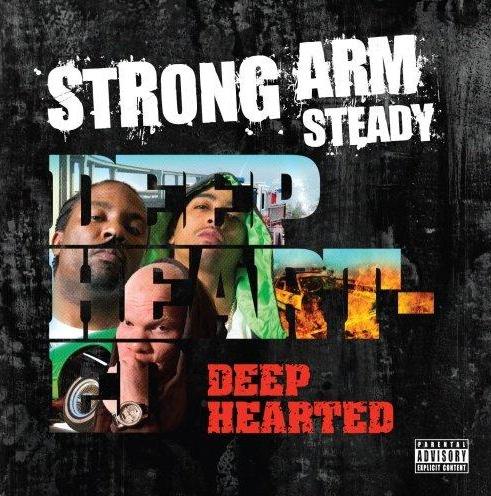 Strong Arm Steady has been on the cusp of breaking through for years now. Originally boasting Xzibit as their main member, the group got instant hype when they first came onto the scene. They later got more attention when the group amicably split from their superstar leader, a move that was probably in the best interest of both. The trio of emcees also inspired one of the most ridiculously named diss tracks in Jayo Felony’s “Weak Arm Wobbly.” Buzz aside, the question still remains whether one of the West Coast’s most hyped rap groups can deliver the goods. Consisting of Phil Da Agony, Mitchy Slick, and Krondon, the trio is a blend of gangsta rap and lyricism. Phil Da Agony has already made a name for himself with his solo album, while Mitchy Slick has been dropping a steady slew of solos for years now. Krondon on the other hand only has Strong Arm Steady as his claim to fame. One look at the track listing and it is clear that the trio has plenty of believers as Talib Kweli, Chamillionaire, Juvenile, Planet Asia, Ras Kass, Black Thought, and Tha Liks all make appearances.

The “Intro” features a snippet from Jack Nicholson’s character in what I believe is “The Departed” and The Game giving Strong Arm Steady his seal of approval. “The Movement” kicks in as the first official track and has a pounding beat thanks to Thayod Ausar. The crew establishes their presence in the game, pronouncing to be “the best to do it” and “X to the Z recruited.” “U Ain’t Me” is the next track and features Xzibit, Chamillionaire, and Ras Kass. The odd thing is that the members of Strong Arm Steady have the least prominent role on the track as Krondon handles a small part of the song while the three stars handle all the verses and the hooks. “Blood Money” comes next and has appearances from all three of the core members of the group. Over a smooth bouncing west coast beat, the crew spits cautionary tales of life on the streets. “Co-Operation” is also another street tale condemning snitching while at the same time dropping a positive message. “Clean Up” follows and finds Madlib dropping a disappointing beat for an overall average track. While the previous tracks feature more of the crew they are still overcrowded with unnecessary guests. Each track has at least 2 additional emcees on top of the three core members making for either an overcrowded track or one where on of the members is left off. I’m not saying that just because Strong Arm Steady has three members they can’t drop posse cuts with the likes of Dilated Peoples, Black Thought, or Saukrates, but those tracks do little to establish an identity for the crew. The overabundance of guests continues throughout the album with only two cuts with no guests.

The two tracks which feature the crew exclusively aren’t the best produced on the album but do highlight the chemistry the group has. Krondon boasts the deepest voice of the crew, a penchant for catchy hooks, and provides a mix of gangster and lyricism as he shows on “One Step:”

“Put your helmet on, make sure that you’re buckled tight
Set the alarm off, we coming up tonight
Live via satellite, put your hand up, have to fight
Los Angeles where niggas got large appetites
After hours hot hoes, Hollywood life
Keep the coke for the white nose, we know what they like
It’s been years and we know it ain’t right
To let the glamour and the glitz keep us tied up, rope to the hype
Kathleen keep hitting the pipe
Using a sharp knife to cut through the struggle, ain’t no hustle in sight
Thirteen and the little homie doing what the pimps do
Sweet talking, girls walking home he tell em rent’s due
Game sugar daddies just to see a little nipple
Playing they mental just to play in the middle
Man, I’m saying before love you learn to lust
So why not hit the floor and cut”

Phil Da Agony and Mitchy Slick both lean towards the higher octaves of the vocal scale but differentiate from each other through their content. Mitchy Slick’s flow has a street edge to it while Phil is more focused on wordplay. Despite the need for more crew-exclusive tracks, there are some cuts worth peeping on here. “Dirty Dirty” finds Juvenile holding his own amongst the west coast heavyweights while Talib Kweli steals the show on both “One Step” and “Streetlights.”

Though billed as their debut album, “Deep Hearted” sounds like anything but a cohesive album. It sounds more like just another mixtape from the West coast group. There are plenty of bangers to be found on “Deep Hearted” and Krondon, Mitchy Slick, and Krondon are all beasts on the mic, but they haven’t put together a solid album. There’s way too many guests especially considering Strong Arm Steady is considered by some as a super group. Surprisingly, Krondon stands out as the best rapper here, with the most distinctive flow and hard hitting lyrics. “Deep Hearted” ain’t bad but next time around the crew needs to focus on themselves to truly let us know what they are capable of.