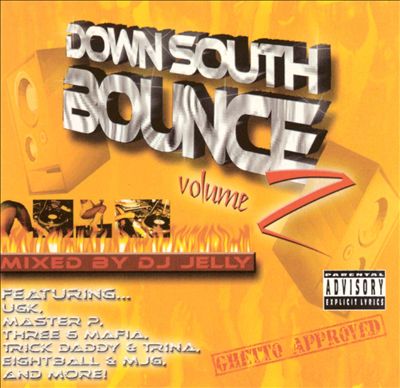 Leave it up to a white rapper who was the product of rap’s East Coast golden era to put together a compilation dedicated to Down South party music. While some may question MC Serch’s motives with shows like “The White Rapper Show,” it is clear the man is up on his history and has a love for hip-hop from all regions. Enlisting DJ Jelly to continue the “Down South Bounce” series, “Volume 2” has some gems that should have probably made the first volume and should be in any rap fan’s collection. Though the compilations mostly overlook New Orleans bounce music, they still include almost all the crucial southern hits from the 1990s.

While my biggest complaint with the “Down South Bounce” collections has been the lack of bounce hits from New Orleans, this time around they include 2 songs that at least acknowledge the genre. New York’s own Showboys are represented here with “Drag Rap (Triggerman)” which is the base for New Orleans bounce music as almost every bounce track sampled this song. I’ve always found it ironic that a mid 1990s NY gangsta rap group spawned the New Orleans rap scene. DJ Jubilee is represented with “Jubilee All,” a track that is far from Jubilee’s best track but includes the signature call and response found in New Orleans bounce and samples the Showboys’ track that comes before it. Old school Memphis buck is represented well by DJ Jelly as three crucial tracks are included. Three 6 Mafia come through with the career defining “Tear Da Club Up,” if you haven’t experienced the dark, violence inspiring track this is as good a place to get it. Eightball and MJG are represented by “Pimp In My Own Rhyme” which was remade recently by Cleveland native Ray Cash. Overlooked Memphis group, Project Playaz, also show up in the form of “Buck With Me” which is not their biggest hit but still a good buck track that is sure to get a party started.

DJ Jelly has always had a knack for keeping a party going, and it’s no different here as he mixes in both old school and new school tracks with precision. Master P’s “Bout It Bout It” is blended with C-Murder’s “AKickDoe” while Jubilee gets blended into the Youngbloodz’s “U-Way.” Aside from the dope mixing, the aforementioned tracks don’t get enough love/recognition outside of the South. Being from Atlanta, Jelly reps his home town well giving us Goodie Mob’s “They Don’t Dance No Mo” and Oomp Camp’s “Get Buck Off In This Thang.” Goodie Mob needs no introduction, but Oomp Camp may not be instantly familiar to all. The Atlanta label has gone on to produce hits by Baby D, Hitman Sammy Sam, and DJ Unk among others. DJ Jelly even manages to throw in Big Moe’s “Barre Baby,” which covers the last southern rap hot spot in the form of Houston and is Big Moe’s best track. Outside of questionable Tela and UGK tracks and a bonus throwaway from unknown Malan, “Down South Bounce 2” bangs just as well as the other two compilations.

The “Down South Bounce” series was one of my favorite compilation series when it first came out and nothing has changed. Though it has been 4 years since DJ Jelly was enlisted to put together an official release, if Serch has any sense he’ll call the man up again to give us Volume 4 and beyond. Aside from putting together crucial southern tracks, DJ Jelly mixes the tracks with precision allowing you to throw this on at a party and not have to worry about changing CDs. Even though I already own the bulk of the tracks on individual CDs it’s nice to have them packaged together like this. Those who are only casual fans of Southern rap should also run out and get the series, it’ll provide you some dope tracks without having to buy individual albums.