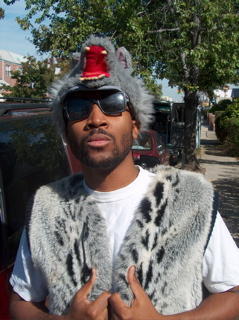 The Lil Folk, who are they and what should they mean to you? According to SumKid Majere The Lil Folk, which happens to be the title of his widely acclaimed full length debut album, is another way of saying the common man, the people who day in and day out do his or her thing without the massive acclaim or salary of an athlete or a movie star. SumKid considers himself a member of The Lil Folk and this week RapReviews caught up with him to discuss why he feels The Lil Folk are so important, where his love of sci-fi and fantasy has been taking him, and why if you want to buy him a beer you should probably make it an import.

Adam Bernard: First off, tell everyone who SumKid Majere is, where you’re from and what makes you different from all the other artists out there.
SumKid Majere: My name is SumKid Majere, I also go by Sum Majere, or just Sum. I’m from North Carolina by way of Chicago and Atlanta and I’ve also called New York home. And shoot man, what makes me different? Gol-ly. Well, I have no shame. I have a lot of pride but very little shame and I’m very fearless when it comes to what I’m willing to try to do or what I’m willing to explore. I’m a little bit obsessed with trying new things, trying something different, but I still want to make things relatable. There area a lot of experimental musicians and rappers out there, but for me it’s kind of a preoccupation. I’m just all about having fun.

AB: I’m glad you mentioned you’ve lived all over because I know you have the California area code now, but when I listen to The Lil Folk LP I have to say it sounds nothing like a California album. Who or what are your musical influences?
SM: The thing about The Lil Folk is that I started work on that album when I first moved to New York and that was back in 2001. I actually finished that album in ’04, so most of the influence was post 9/11 New York and I was just coming off of Atlanta, too, so I was in a big limbo between southern sensibilities and getting in touch with what it means to live and be in New York, especially just after 9/11. Life is my biggest influence. Musically I have a bunch of stuff embedded in me from Tha Alkaholiks, The Pharcyde and Outkast to Muddy Waters, Howlin’ Wolf, James Brown, David Bowie, The Cure, it goes on and on. I’m a huge indie rock, new wave, 80’s pop fan as well as a huge blues, funk and obviously Hip-Hop fan, too. I wanted to throw all of my influences out on the table on The Lil Folk so that there wouldn’t be any questions for the rest of my career as to what direction I could go. All of my directions, I put em on that album, that was my point.

AB: I noticed you listed a lot of non-Hip-Hop artists as influences. Do you find Hip-Hop artists as being less influential on you even though you’re creating Hip-Hop music?
SM: No way, nah. They’re just influential in different ways. When I listen to Andre or when I listen to Common I get something different from them, I’m listening to the way they’re expressing themselves as far as riding the beat, how they’re rapping certain concepts up into a verse or into a particular type of delivery. When I listen to somebody like Tom Waits I’m listening to how they’re telling stories through song. So my songwriter side is a little less influenced by Hip-Hop, but that’s about it, everything holds pretty much equal weight.

“I wanted to make an album that made The Lil Folk of the world feel like they could do extraordinary things.”

AB: Why The Lil Folk? Why not the big folk?
SM: I wanted to make an album that made The Lil Folk of the world feel like they could do extraordinary things. Like I said, I wrote that album in post 9/11 New York and there was all sorts of electricity flying through the air. The people were questioning who the quote-unquote enemy was. People were redefining what their relationship was with each other and there was this looming doom about the air, but there was a lot of love in the air, too, so it was kind of like a time where The Lil Folk of the world were banding together, whether subconsciously or consciously, and I wanted to submit that emotional movement into an album. I wanted to make an album for the regular folk and there’s a line in my song “Ole Gnat Grind” that kind of spawned the title of the album where I say “I’m not preachin/ The Lil Folk reaching/ for low ceilings/ gold schillings in the coliseum,” and what as on my mind was as a lil folk sometimes we set our bars too low because we feel like we’re only deserving of so much, but really the universe is ours. We can have whatever we want.

AB: That’s almost a biblical idea, the meek shall inherit the earth. The Lil Folk isn’t the only project you’ve been working on, though. Talk to me about The Nobody Hole.
SM: The Nobody Hole was a brainspill of sorts. I’m a writer, dude. I was writing before I was MCing. I was always a music fan, but I was writing stories and little novellas before I was eleven years old and I’ve always been a huge sci-fi and fantasy fan so I’ve always known in my bones that I was gonna write something like that but I didn’t know that it was gonna come across in a Hip-Hop format. Basically The Nobody Hole is a dark epic fantasy narrative kind of with a Halloween theme somewhere between Edward Scissorhands and The Boondocks. It’s like if Tim Burton and Aaron McGruder decided to work on a Hip-Hop album together. Alice in Wonderland is a huge influence, too. The story is of this kid named Paul who falls into another dimension of lost souls and he has to find his way out. That’s the nutshell of it. I brought in my future wife, Nzinga, to narrate the story, my buddy BadTouch, who has a lot of the production credits on The Lil Folk and is also a phenomenal engineer, did all of the music for The Nobody Hole, and my buddy Doug Hoffman, who is a visual artist, I brought him in to do character scenes and sketches. I wanted to make it a multimedia experience, so what I’m doing right now is I’m shopping for a movie deal, or a show production deal with Cartoon Network or something like that to make it either a three part miniseries or a full 60 minute animated feature.

AB: Why did you want to make something that’s so depressing?
SM: It’s a dark story but it’s the first installment of a trilogy. If you think about Star Wars it started out as very foreboding in a doom and gloom way, too, and it ended in triumph. It was the same with The Matrix. Every great epic starts off in dire situations. It’s a good place to start a good story.

AB: With an album like The Nobody Hole and songs on The Lil Folk like “Sweatervest” is it safe to assume you roll with an interesting crowd?
SM: Yeah. I’m probably the least interesting character out of everybody I know (laughs). I’ve always surrounded myself with madmen, gamblers, drunkards and assholes. They, a lot of times, inspire what I do. I roll with a cool bunch of people. My buddies Clan Destined out in Atlanta, my buddy Pudge MC, Malkovich, BadTouch, I just roll with a lot of evil geniuses. But yeah man, interesting crowd is definitely one way to put it.

AB: I know you mentioned sci-fi and fantasy earlier, but what else interests you outside of music?
SM: I’m a big student of health, metaphysics, alternative health. I spend a lot of my time reading up on meditation techniques and gathering Chi and acupressure and acupuncture and herb-ology. I make my own tinctures and potions. Anything that has to do with ancient or eastern philosophy, medicine and thought, I’m all about it. I’m also a beast in the kitchen. I’m actually working on my own cookbook called The B-Boy Cookbook which will be cool affordable recipes for the light of pocket. So yeah, food, cooking, mysticism, music, that’s pretty much me… and drinking, I’m a huge fan of beer.

“I like Belgian beers. One of my favorite spots in New York is down on West Third and Sixth Ave, it’s a Belgian beer garden…”

AB: Any favorites in particular?
SM: It would be easier for me to talk regions, I like Belgian beers. One of my favorite spots in New York is down on West Third and Sixth Ave, it’s a Belgian beer garden, I used to go to that place quite a bit. I like Belgian beers, German beers, Guinness Stout. I have a Guinness hat that I wear frequently. Guinness is my good old stand by. I like to frequent Irish pubs. I kind of tear through it, though. People say it’s thick but it don’t really strike me as thick or heavy, just a good fine bodied brew.

AB: I like Guinness because when you’re drinking one no one ever asks if you need another drink.
SM: (laughs) Yeah it’s like you automatically grow a moustache.