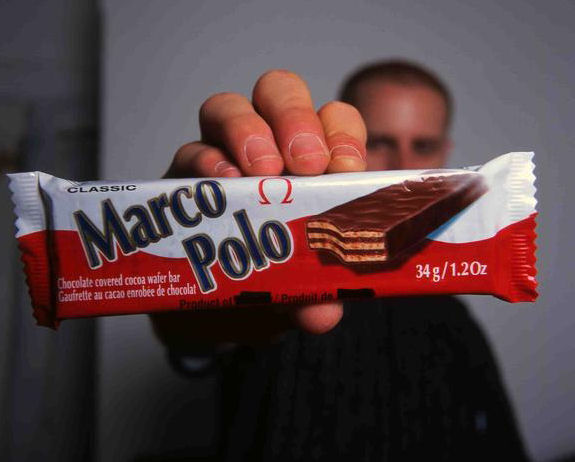 Born in Toronto, but now residing in New York City, Marco Polo is a beatsmith that has the industry buzzing. His upcoming album “Port Authority” features a long list of MCs that includes everyone from the most legendary of legends to the hottest up and comers. This week RapReviews caught up with Marco Polo to speak with him about the album, which is due out on the 15th, how he chooses which artists he works with, and who he sees as the future stars of Hip-Hop. Everybody into the pool, it’s time for a little Marco Polo.

Adam Bernard: First off hit everyone with the basics, where you’re from and how you got your start.
Marco Polo: I’m originally from Toronto and about four or five years ago I moved out to Queens, New York, I had a friend there and stayed in his basement. When I graduated engineering school in Toronto I was like you know what, let me move to New York and get on my grind and try and find a job in a studio out there, so that’s what I did. I ended up landing an internship at a studio called The Cutting Room which really started off everything for me, They did a lot of early Rawkus stuff from the classics to towards the end when they were shutting down shop. I got a chance to meet a lot of rappers there while I was managing the studio and engineering. I kept passing out beats CDs to cats and finally Masta Ace came into the studio for a session with The Beatnuts and before he left I passed him a beat CD and he chose the beat that ended up being “Do It Man” on A Long Hot Summer with Big Noyd. From there things kind of jump started for me.

AB: Did you give yourself the name Marco Polo because people were having a hard time trying to find you?
MP: Actually Ayatollah gave me that name. My real name is Marco so I always got that, the Marco Polo, to bust my chops, and Ayatollah, who is another producer, came up to Toronto once and we were kickin it and he just started calling me that and it just kind of stuck with the me. I don’t mind it at all. I like it because it’s my real name so people call me Marco and it’s not like a show name.

AB: Talk to me about the new album, “Port Authority“, you have a heck of a lot of artists on there. How did you decide who to work with?
MP: I approached it like a fan. I kinda ignored what was trendy on the radio and what everyone thinks is hot and stuck to my guns and was like what do I want to hear as a fan of Hip-Hop, and it was a combination of the people I grew up listening to and newer cats that I was really feeling. I reached out to a bunch of people and 90% of the time I was able to make the collaboration happen.

AB: That’s a pretty high percentage. Was there anyone you wanted to work with that didn’t make it onto the album?
MP: Yeah, there were a few cats, Elzhi from Slum Village, Freddie Foxxx, Poet and Teflon were supposed to be on the album, and Heltah Skeltah and Inspectah Deck.

AB: Together!?!
MP: Right, yeah. I don’t even want to mention it because cats’ll just be like “aw shit.” There’s still time.

“I like to connect with people who help me step up my music. I like being around people that are dope and inspire me to make better music…”

AB: You said you approached this album as a fan, but what do you look for in an artist when you’re seeking out people to work with other than just thinking they’re dope?
MP: I mean that’s really the main thing, I like to connect with people who help me step up my music. I like being around people that are dope and inspire me to make better music, that’s gotta be there. If I’m not feeling your music it’s gonna be hard for me to get excited about working with you so a lot of the artists are people that I listen to as a fan, that’s why I mentioned the whole fan perspective, whereas a lot of cats will just reach out to dudes that everyone else thinks are hot or thinks is dope. Fuck that, I’ma work with people that I like and have that respect for.

AB: Have you ever had an instance where you were a huge fan of an artist, got them into the studio, and they ended up being a complete bitch?
MP: No, not for my album. When I was at The Cutting Room and engineering and seeing people come in there… I met a lot of assholes that I didn’t think would be like that, without mentioning names. That was shitty.

AB: So you’re not going to mention names, but there were a significant amount of male divas coming around.
MP: Definitely from lie the biggest in Hip-Hop to even underground cats who rep that whole conscious shit. They have their good and their bad days. One of the most conscious MCs used to send interns to go buy him shaving cream and white t-shirts and bullshit.

“I got to control 100% of the content, where it’s going, what it sounds like and how it all connects.”

AB: What was the most rewarding aspect of creating “Port Authority“?
MP: I got to control 100% of the content, where it’s going, what it sounds like and how it all connects. I come from an era where there’s one producer on an album. A lot of the timeless classic Hip-Hop albums that I’m sure we all listen to, there was a cohesive sound. A Tribe Called Quest, they had The Ummah with Tip and Shaheed and maybe Dilla towards the end, but it was a cohesive sound so when they made a whole album it flowed right and it made sense as opposed to know where it’s everyone just trying to get a bunch of star studded names on the production but when you listen to the album it doesn’t have much replay value it more about on paper looking dope than actually being dope. One thing about producing my album is that I did all the beats and I got to pick everything and my sound over an album is going to stay consistent because it’s me, it’s not gonna change. While the styles might change a little it’s all Marco Polo sound and it flows. I love working on whole albums, actually prefer that than trying to shop random tracks here and there.

AB: I’m glad you mentioned that because it leads really nicely into my next question. In terms of continuity, you have a vast array of artists that probably wouldn’t normally be on the same album, how do you make sure the songs make sense together?
MP: Right. It was all planned out, you start with a couple ideas and then you keep building. You have a bunch of songs towards the end and that’s where the challenge to connect them all comes and that’s really in the strength of the artist and I gotta shout out two people, my man Shylow, who’s a rapper form Toronto, and my DJ, Linx. The three of us really mapped out this whole album together and where a couple songs might have not made sense we would go and create interludes and skits and things to tie everything together so it kind of flowed when you listened to everything top to bottom. It’s in the whole spirit and inspiration from Pete Rock’s Soul Survivor I, that was definitely and album that I had in mind when I started to make my album. That’s the team right there, that’s the committee, everything I do goes through them and we all build on stuff together.

AB: When you all get together what’s your work process like?
MP: Well they’re both in Toronto and I’m in New York so a lot of the stuff happens via email, but usually I’ll do all the beats and work on the songs here and before I go in the lab with certain artists I’ll speak to Shy or Linx and we’ll try and get a vibe or an idea of where we think the song should go, or I’ll tell them my idea and get some feedback and I’m able to take that information and that confidence into the studio with an artist and be like this is what I was thinking for the hook. I get really involved with my tracks when I’m working with an MC because I feel like a lot of the time artists want direction and new producers might be intimidated to work with an O.C. or a Buckshot, but those type of dudes are down to make classic music so they want the feedback, they want direction and I think they really respected working with me because I was real vocal about all the processes when it came to making the songs and that’s why I’m really proud with how it came out and the quality of it. Some of these songs we didn’t knock out in one hour, they took a couple weeks. We’d do a take, sit with it, listen to it, and then put it all together. There was no rushing anything. I didn’t put anything on here that I felt was half assed.

AB: Everything is fully assed on this album.
MP: {*laughs*} Thank you.

“A lot of people that I worked with on my album like JoJo Pellegrino has not gotten the shine I feel he deserves.”

AB: Finally, if you had your way who would be the next artist to blow up other than yourself?
MP: Good question. I appreciate the good questions. You know what, I’m gonna have to name a few people. A lot of people that I worked with on my album like JoJo Pellegrino has not gotten the shine I feel he deserves. Roc Marciano from The UN, my homey Toure, a group called Red Clay and my man Shylow.