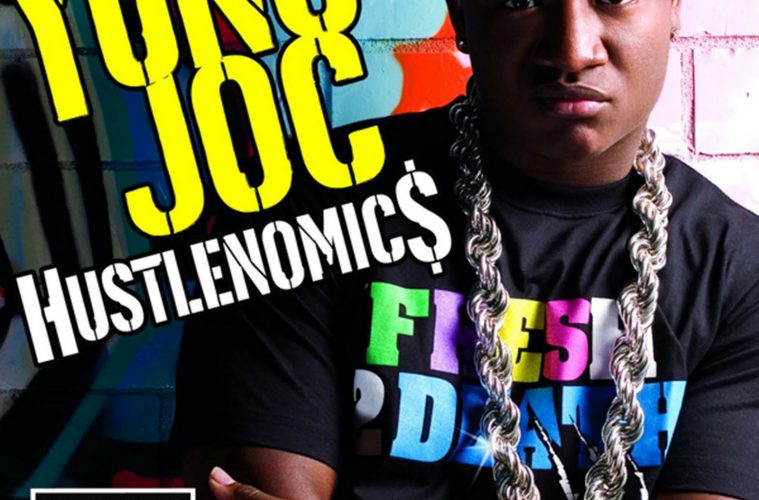 Eenie, meeny, miney, moe. How many albums can Yung Joc flow? Clearly more than one. For a rapper who looked to be the New Joc City,” the rapper born Jasiel A. Robinson has shown a surprising amount of staying power in hip-hop. While his early work showed a lot of potential, it was marred by the occasional gangster rap cliche about selling drugs, spending money and driving fancy cars. When allowed to paint outside those lines by his label Joc showed a lot more personality than the typical “new jack” hip-hop artist whose label spends more on one music video than he’ll earn in his entire career.

Therefore I couldn’t help but be concerned that the title of Joc’s second album was “Hustlenomic$.” It’s like Al Pacino said in “The Godfather: Part III” – when you think you’re out, they pull you right back in. Having struck literal gold with Yung Joc’s debut Sean Combs was undoubtedly HONGRY to taste success again, and BK was closed for the night. What’s a rap mogul to do? Convince his young protege to stick to the script, that’s what. You can’t even call it a coincidence that the producer for his first single “Coffee Shop” is named Don Vito. Bad Boy wants to mob up in the worst way and be known for more in 2007 than endlessly rehashing B.I.G.’s music. “Coffee Shop” proves they aren’t taking any chances with a pattern that works. In essence Joc recycles the “sex cash money and drugs” formula under the thinly veiled metaphor of your neighborhood Starblocks house of java. Drink up – “Coffee Shop” purports to be good to the last drop:

“It’s just another day at the coffee shop
We sellin everything, down to the shoes and watch
And for the right price meet me in the parking lot
I got a sale on them old school Chevy drops
No knock cause we only serve the best
Oh yeah my coffee shop is cheaper than the rest!
I’m takin orders, tell me who’s next
Only cash, no credit, no checks
When your car stop, welcome to Starblocks
You wanna triple your knot? Invest in our stock
And now we doin numbers, just like the close-out
Make sure to shop with me, before it’s sold out”

There’s no question the song’s a hit. In fact it may even have the potential to launch guest star Gorilla Zoe from a little known regional rapper to a national name with a big label album of his own. As a writer I’m hard-pressed to say good things about the song though. The cheesy sing-song Joc flow, unsurprising and formulaic lyrical subject matter and overly cute “Chain Hang Low” style children just SCREAM terrible song. Thankfully “Hustlenomic$” has more to offer than the lead single. The Neptunes break out of THEIR formulaic approach to create a unique track for the Diddy & Joc duet “Hell Yeah.” “Cut Throat” is an all-star head busting track where Joc links the coasts by rapping with The Game and Jim Jones at the same time. Out of all the guest appearances though the best is either Trick Daddy on “Chevy Smile” or Snoop Dogg and Rick Ross on the Dee Jay Dana produced “Brand New”:

“From my fitted down to my shoes
I enter the room and your bitch might choose
Look me up and down from my head to toes
Then point to exit then I tell ’em “Let’s go!”
S-5, don’t forget the 50
What it cost me? About a hundred-fifty
DAMN! What’s this, why it’s so sticky?
That’s good kush, quarter cost about a hundred-fifty
Smell the leather – still brand new
Lookin at the sky through that panoramic view
She say she like my jeans, even like my sneaks
That’s the new Gucci; five hundred apiece”

OKAY it’s true – this one is lyrically formulaic too. It’s the smooth music and the guest stars that really make the song palatable. Joc plays this one about as close to the vest as possible to the point the song titles read like lyrics of a song themselves. In other words when you’re “Bottle Poppin'” and “Living the Life” with your fly “Momma” you best make sure to “Play Your Cards” right or you might end up under arrest like “Pak Man” Jones. It’s “BYOB” ’cause “I’m a G” so when you decide to “Do It” we’ll be “Getting To Da Money” like it’s “Hustlemania.” Get it? Got it? Good. There’s no chance for Joc to go outside of the margins this time, not even a little bit. The irony is Joc is now trapped by his own success, expected to come back with hit after hit all mined from the same vein. The problem with that is that when the next seismic shift comes along in hip-hop that mine’s going to collapse and Bad Boy will abandon Yung Joc underground, writing him off as a loss while counting the millions that he made them. Eenie, meeny, miney, moe. I hope Yung Joc is investing his dough.