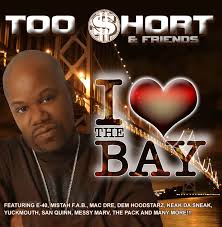 “The Biggity Bay”, “The Yay,” the birthplace of the hyphy movement, or known to most as the Bay Area, has been the origin for countless celebrated emcees past, present, and future. With his new label, Up All Nite, Oakland’s infamous Too $hort pays homage to the Bay Area in his newest compilation “I Love the Bay” featuring the paramount talents of Nor Cal’s hip hop scene.

The newest and illest break out artists coming out of the Bay Area hip hop scene are the brains behind the first two singles to be released from “I Love the Bay.” “Lose It” features Mistah F.A.B. in this lively, upbeat track that initially could be mistaken as a techno club track, but with the introduction of a hard hitting reverberating bass and lyrics seems to belong in booty shaking club instead. An assortment of electronic sounds and synths provides a new and different feel in “I Love the Bay” as it abandons the predictable Bay Area sound.

Also, known for their hit single “Getz Ya Grown Man On,” appearing in the commercials for the CW’s King of Queens, Dem Hoodstarz is featured in “Video Vixen” backed with blaring bass and hypnotic bells throughout the track. You can only guess what they dream of doing to these “video vixens.” As Too $hort says, “You might even be having sex with your girlfriend, but daydreaming about a ‘video vixen’.” Damn $hort!

Paying respect to a Bay Area hip hop legend, Mac Dre is resurrected in “We’ll Roll You” in the company of producer Amp Live and MC Zion, the duo of the Oakland hip hop group Zion I.. The sounds are reminiscent of Mac Dre’s classic, yet unique style and lives on in this track as it remembers the artist as if he were still alive and ready to roll. Amp Live’s stellar production can also be heard in “Don’t Lose Your Head” with his signature non-conforming hip hop beats and incorporation of electronic sounds. With the diversity in the Bay Area hip hop scene, Zion I’s music is quite different from Too $hort’s more traditional hip hop sound which reveals a multiplicity of resonance in “I Love the Bay.” After Too $hort just so happened to hear this Zion I track from a friend and quickly “fell in love with the song,” he asked to do a verse on the song to be on the compilation. The rest is history.

With a vision of covering all aspects and locations throughout the Bay in “I Love the Bay,” Too $hort decided that a track devoted to the city of Oakland was in need to mention all the places to represent. “Town Business” features new, up and coming Oakland emcees that represent the core of the city such as artists Lil Al, Beeda Weeda, J. Stylin, Dollar Will, Eddie Projects, and Zo the Roasta. With the emphasis on these raw Oakland emcees, it is exactly what Too $hort envisioned for the track.

“Blame it on the Drugs” features V. White, a member of Oakland’s The Delinquents, mixed with production from Big Zeke in a collaboration in which they call themselves The Neighborhood. The hypnotic, repetition of the hook and solid bass line are appropriate for the track as it reminds everyone to not accountable for the mishaps that go on at the club. Lesson one: just tell your girl back at home that you “blame it on the drugs.”

Keak Da Sneak, one of the initiators of the hyphy movement, and G Stack are featured in “Going Dumb,” a track that was originally supposed to be on Too $hort’s album, but didn’t make it on. Also, Too $hort introduces the feminine perspective in order to pay tribute to the Bay on the title track featuring Creme Alize and Pryceless. The track’s simple beat of echoing synths and sporadic chimes only emphasizes the magnetic repetition of the chorus “I love the bay.”

A Bay Area compilation wouldn’t be complete without “Charlie Hustle,” “Forty Fonzarelli,” “40 Water,” or better known as “The Ambassador of the Bay,” E-40. Featured in “This My One” with Too $hort and production from E-40’s son, Droop E, the track highlights the eccentric lyricism from E-40 with his signature “40 lingo” and emphasizes the timeless rhymes of $hort dog. Almost synonymous to the phrase “this my song” when you hear your favorite jam, “This My One” emphasizes the substance to that one song everyone has to listen to, to dance to, and to feel to as Too $hort says:

“Me and E-40 we rap for money
On funky ass beats with slappin’ drum beats
Pay me up front ’cause I’m not a dummy
Promoters like bitches when they hot they want me
And that’s all the time
I stay on tour knockin’ all the dimes
I can’t name ’em
The list is long
But when they hear the Bay shit they say, ‘This my one'”

Even better, there are talks of an E-40/Too $hort album… damn!

Too $hort, alone, is a remarkable veteran of Bay Area’s hip hop scene and in conjunction with other unsurpassed emcees, “I Love the Bay” encompasses the melting pot of Bay Area sounds while bringing to light talented artistry. Having heard countless compilations, “I Love the Bay” is one of the most superb Bay Area compilations I have heard in a very long time that features the best of the best from the Yay. What can I say? I live and breathe the Bay Area. It’s who I am and where I’m from and although I may be biased, I might as well say it too…”I LOVE THE BAY!”