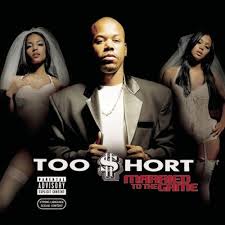 Too $hort :: Married to the Game

Too $hort. The irony of Todd Shaw’s chosen moniker can’t be lost on anyone by now, given that he hold the longest continuously running career in hip-hop. Despite rumors of a retirement four or five albums ago, Short Dawg has proved he has no intention of quitting – living up to the “Don’t Stop Rappin'” motto he coined two decades ago. At only 37, there’s no reason to think barring death or throat cancer that he won’t be recording raps for ANOTHER two decades.

“Married to the Game” provides ample evidence that retirement at this point would be a grave mistake. Lil Jon produces and guests on the lead single “Shake That Monkey,” but it’s Too $hort that gives the song it’s drive and personality. The cover of the album advises “strong language, sexual content” but even if you heard the radio edited version you’d have to be incredibly DENSE not to realize $hort’s talkin’ shit. That’s his M.O. – rapping about sex and using lots of cuss words. Andrew Dice Clay stole the game from $hort and only used it half as well – this song is the proof:

“Bounce that ass ’til you can’t no mo’
Make your ass touch the flo’ like your legs is broke
Take that big ol’ booty girl and scrub the ground
You can do it up and down, or round and round
… as long as that pussy ain’t stiff
Dance and make all the niggaz look at that shit
Like you strip at a club in the A-T-L
Little bitch tore it up, they started raisin hell
I remember Magic City before the FreakNik
‘fore the police started all that weak shit
All the big hoes, get loose with it
All the skinny hoes, let Bruce Bruce hit it
Let a nigga fuck tonight, damn right bitch!
Fuck my wife! You my slut for life
You know all I do, is count that cash
I won’t charge you as long as you bounce that ass”

No amount of dirty talk could keep the charts from pumping up this catchy anthem to big butts, a raunchier “Baby Got Back” for the 21st century. It hardly matters whether the beat is a Lil Jon original or samples from “This is for the Lover in You,” as Ant Banks does on the track “What She Gonna Do?” As long as the song contains enough bass to challenge your woofers and enough funk to nod your head, it’s perfect for Too $hort to teach his pimpology:

“I knew she had potential, to be a real player
Get paid up the ass by a millionaire
She ain’t tradin sex, like these broke hoes
Her shit is worldwide, these bitches loco
She took the show on the road, for the fun and the thrills
Now it’s nothin but hundred dollar bills
She got a lot of G’s, spend ’em how you please
All you broke-ass hoes, get up off yo’ knees
Don’t go to Hoe College if you want some mo’ knowledge
Cause bitches graduate and end up with fo’ dollars
You can be a hustler, and never be a baller
He tried to bread her up whenever he would call her
But the bitch was too dumb, to ask for a thang
I try to teach ’em when they young, so they don’t pass on the game
And when you get your thang on
Remember where you got your game and where you came from”

$hort shares the album’s spotlight a lot on the first half, but you won’t be mad at hearing Jagged Edge and Jazze Pha on “Choosin'” or Noreaga and Petey Pablo on “You Can’t Fuck With Us.” By “PimpandHo.com,” $hort takes over for the rest of the album until the “Short Short” closer at track 15. Dez of 12th Floor Productions laces up some classic funk for the song “Hobo Hoeing,” but on “Get It” he makes it as hard and heavy as any $hort song has ever been. Not surprisingly, $hort feels extra inspired by the boom, and gets extra freaky with the rhymes:

While some might be tempted to label $hort the freak master for the strip clubs, it’s impossible not to notice that other sextified rappers like Akinyele and Luther Campbell play second fiddle to Too $hort in their popularity and influence. $hort can not only be said to be the original dirty rapper, the one who signified while others kept it clean, but the rapper who helped make it mainstream. When Oakland’s top player asks the question “What’s a Pimp?” only the most sheltered of our society could honestly say they don’t know the answer already. Regardless, $hort isn’t afraid to teach playerism lessons for those who weren’t around for his other fourteen albums:

“I spent so many days with you, so many nights
It’s nice, I wanted you to be my only wife
We didn’t make it, I couldn’t take it
I tried to square up, it’s too hard I couldn’t fake it
And now I see why, since I was knee high
I swore to live and die by the P.I.
And I’m stayin true, born in this game and it’s payin too
I wish I could have stayed witchu
But it’s over, I love you and I still care
We can kick it any time, but I’m still a player
… damn you got that look I like
I tried to settle down it felt like you took my life
I left town, I got women all around
While I was out soul-searchin, guess what I found?
The more hoes the merrier, you think I wanna marry her?
Bitch that sounds scarier and scarier”

Unrepentant, uncensored, and not likely to give a fuck if you don’t like it, Too $hort’s doing his shit like always. Dez seems to be the ideal match for $hort’s raps these days, and his production pays off with some of the most pimped out vocals from the King Pimp in years. It would be a bald-faced lie to say that Too $hort raps are going to be profound, although they are occasionally introspective and always have a lesson, even if some women may find the teachings offensive and misogynistic. Nevertheless you can’t fault the man for sticking to his beliefs and talking about what he knows, and that’s bitches and hoes. When it comes to bitches and hoes, nobody knows the cons or the pros like Too $hort; and when it comes to talking about it nobody has the laid back mack flow to go that he does. He’s “Married to the Game” for life and not planning to ever get it annulled.