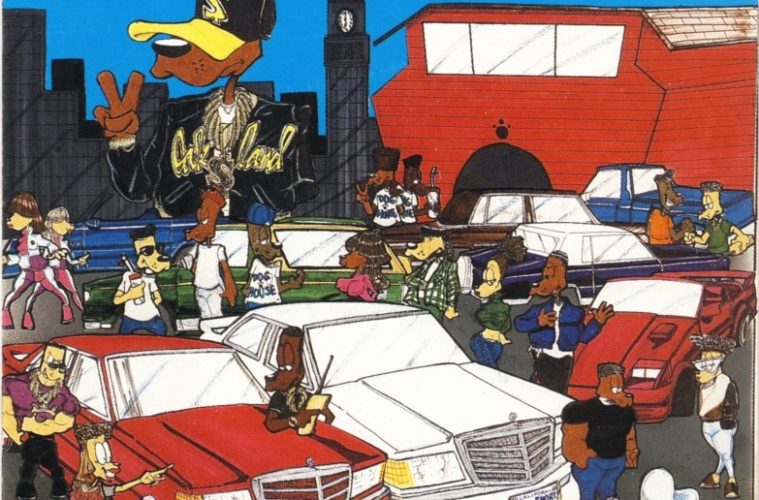 Too $hort :: Short Dog’s in the House

If it gives you any idea how long Too $hort has been in the rap game, this 1990 release was his SIXTH album. Like no other rapper in the industry today save perhaps Ice-T, Todd Shaw can legitimately claim to be the Godfather of PIMPIN’. Just like today’s professional female service providers give their props to Bishop Don Magic Juan, any rapper who claims to be a mack, a hustler or a player should kiss the ring of Sir Too $hort. By the time this album was released anybody in the know could say that nobody had pimped longer or better than Short Dog, but the original “Freaky Tales” rapper had a new story to tell. With his smash hit single “The Ghetto,” the Oakland mack painted the vivid reality of his city and ghetto life in a way few MC’s had done since “The Message” by Grandmaster Melle Mel:

“Even though they put us down and call us animals
We make real big banks and buy brand new clothes
Drive fancy cars, make love to stars
Never really sayin just who we are
We use alias names like TOO $HORT
Sell you stuff you might kill for
Young kids grow up and that’s all they know
Didn’t teach him in school, now he’s slangin dope
Only thing he knows is how to survive
But will he kill another brother, before he dies?
In the ghetto, you keep one eye open
All day long, just hopin and hopin
You can pay your bills and not drink too much
Then the problems of life you’ll be throwin up
Like me… but you don’t see
Ten years from now, where will you be?”

Too $hort had always been kicking “reality raps” on his albums, but this new reality was actually the same old reality that gave birth to him and his hard rhymes all along, put into words. The single itself may have pushed quite a few copies of $hort’s sixth album, but the rest of the LP has a lot more to say. Produced largely by Shaw himself and featuring the able assistance of Al Eaton, D.J. Pooh and Sir Jinx among others, the hardcore funk was perfect to rattle yo’ trunk. It wouldn’t work without some classic shit-talkin’ from $hort, and he provides it on classics like his duet with Ice Cube “(Bitch) Ain’t Nothin’ But a Word to Me”:

“Ice Cube’ll slap a hoe for the fuck of it
Just like me and that’s some real shit
Bitch got bold with her loud ass mouth
Tough ass bitch got knocked out
You know a bitch ain’t nuthin but a word to me
Some of you punks are just scared to see
If you could call that bitch a bitch, you would
And if you can’t, you probably should
I’m spitting game to you mark ass lames
On how how to get a bitch and treat the bitch like shit
Can’t buy love, all pimps know that
It’s all about the way old $hort Dog macks
Don’t hold the bitch hand or walk side by side
Go first class everytime you fly
She’ll go Greyhound, and just meet you there
I’m just an ice cold hard ass Oakland player”

Politically correct? Hell no. Misogynistic? You’d better believe it. If you expected anything different after hearing “The Ghetto” you’d be in for a rude awakening, and I’m sure a great many people who bought this album were. The Too $hort fans were in for the real surprise though, because every here and there among the mackin and crackin were some surprisingly non-bitch oriented pearls about the hardships of day to day existance. Take “It’s Your Life” for example:

“Homeboy you can’t see it but you know it’s there
It’s called tomorrow, whatcha gonna do with that
cut school, sell a few dopefiends crack?
It’s not a one-way street, it’s more like a dead-end
So if you take it, you better turn back my friend
I know a lot of young brothers don’t think things through
They really don’t know what they wanna do
When you lag, you lose, you start payin your dues
You can’t kick back and let your bankroll stack
You’ll be stuck on stupid, for smokin a friend
Ten years from now you’ll still be in the pen”

The game is to be sold and not told, and $hort does it repeatedly over smooth background just made to ride to whether you push a hooptie with a tape deck or a Caddy. It’s all there from “Short Dog’s in the House” at the beginning to “Rap Like Me” right at the end before a reprise of “The Ghetto.” Mixed in over the same high caliber beats are a selection of songsthat would be called preachy from other MC’s without $hort’s pedigree. It’s odd, but whether he talks about hoeing out women or getting yourself together, he comes across with the wisdom of the ages. A perfect example would be his anthemic and somewhat biopic song “Short But Funky”:

“Not your average everyday fake rap on the micro
I might say something that your mother don’t like so
Don’t play it loud if she’s around to see
But you can play this cause it’s rated PG
When I’m rated X I’m just havin my fun
I bring a smile to each and every one
But there’s a serious side in everything I say
Life is too short for you to wait ’til the next day
Just straighten up your life and you can start right here
Drop the cocaine and the bottles of beer
People always say it ain’t right to preach
But take my advice, get wise and reach for the sky
So you can live like a king homie
And I’ma stay short but funky”

If the draft for a perfect Too $hort album were drawn up as a blueprint, the foundation would have to be slow to mid-tempo beats that ride a fat bassline. On that foundation, build up walls of rhymes that discuss a limitless amount of coochie poppin most ordinary folk can’t imagine. The roof on top would be an intelligence Todd Shaw obviously had since birth without a Ph.D to prove it – they call it STREET SMARTS. There are a lot of good albums in Too $hort’s prolific catalogue, but if you don’t own ANY this would be the perfect introduction. To his mind, Too $hort is simply “in the house” with this album, but using the materials he provides here and the blueprint for his own imitable style, you’ll find that this house is in fact a mansion.