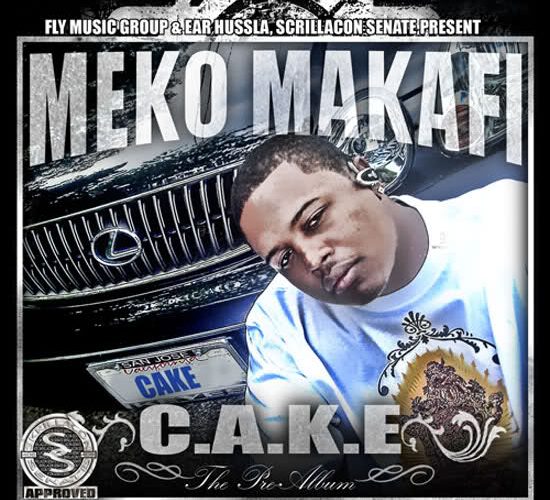 While various cities and regions have laid claim to hip hop’s supremacy (New York, Atlanta and Houston, to name a few), very few have had the consistent quality and uniqueness of the bay area. From E-40 to Zion I, the bay area overflows with great rappers whose talent almost always exceeds their fame.

Meko Makafi is a direct descendent of this tradition. While he does have enough talent as a lyricist to carry an album, what makes him stand out is his charisma. He sports a delivery which sounds fun and light-hearted even when the subject isn’t, which makes every song and enjoyable listen, even when he’s stalling creatively. Most importantly, he carries himself with an easy swagger that keeps the listener at ease at all times.

Further, he’s got a great ear for beats. The “C.A.K.E. Intro” hits a perfect note of foreboding over which Makafi gives his mission (to get the cake, of course). This muted excitement sets the pace for the whole album, which pumps out a spacey, bass heavy sound that’s easier on the ears than it should be. Each song flows well into the next, and while the bass-first aesthetic is always present, the rotating background sounds and samples keep everything from becoming monotonous.

The problems of this album come from Makafi not expressing enough range, and the production exhibiting too much. Makafi comes of worst when he falls into the trap of repeating worn out clichÃ©s. There’s nothing wrong with having fun, as lead single “Bay Whomp” proves, but gimmicky songs like “Girls Love FlyBoyz” are beneath a rapper of his skill. The worst music on the album, however, is when the production strays from its formula. The experimental guitar-rift based “This is Home” is interesting enough lyrically, but it sounds terrible.

“C.A.K.E.” is an interesting album, but it’s not something anybody will be extremely excited about. Most songs on it are good on all fronts, but it’s rarely great. It gives off an effortless vibe when is easy to listen too, but it won’t move anybody one way or another. This is really sad because Makafi does have the ability to make great music. He doesn’t write the most poignant lyrics you’ll ever hear, but he has a way with delivering makes every line ooze with personality. This album is worth a pick-up from any fan of bay area hip hop; it’s a good, consistent album, even if it won’t blow you away.