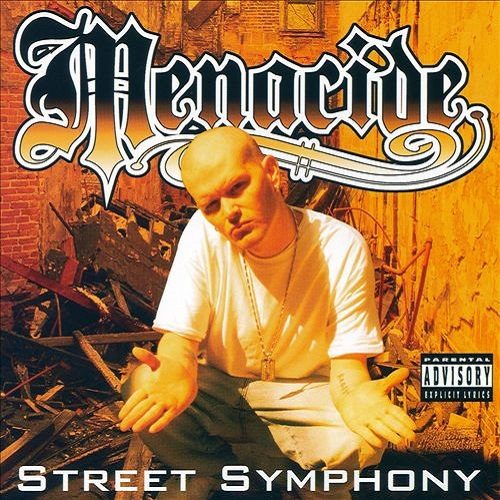 Menacide doesn’t look like the type of person you’d want to encounter in a dark alley at night and I’m not just saying that as a minority who is automatically suspicious of any white person with a bald head. The guy just has a rugged and raw look about him which makes it even more appropriate that he makes hardcore gangsta rap. Some would say Menacide borders on being a horror core rapper, and his music has been embraced by fans of the genre, but in all honesty Menacide’s association with horror core has more to do with the fact that he is white and from Michigan than the actual content of his music. His music is more akin to the hardcore gangsta rap that the Midwest and south has been churning out for years. Appropriately, “Street Symphony” features some of the originators of the style as the Dayton Family, B-Real, Mr. Sche, and the late Proof all make appearances on the LP.

The album kicks off with “Supreme Product” where Menacide makes the obligatory comparison between drugs and rap:

To say Menacide brings something new or fresh to the game would be an overstatement, but he tackles the hardcore gangsta rap genre well. Songs like “60 Seconds or Less” and “Sammy Gravano” do nothing but continue the gun talk, but Menacide manages to maintain the listener’s attention. Part of the appeal is the production handled by the likes of Wyshmaster, Show Down, and F Major. The formula is simple but effective, as all the producers pair pounding bass drums with dark and murky strings and keys. Menacide himself even gets in on the action has he handles the production on the remake of the Too $hort classic “Blowjob Betty:”

Of course anyone who has heard the original knows that Menacide remade the song word for word, beat for beat. The reason for including what is basically a karaoke version of an old school rap song confounds me, but the concept spawned a hit back when “In The Beginning There Was Rap” dropped so maybe Menacide was hoping for the same.

If you manage to forgive the gangsta rap karaoke, the rest of the album serves up some choice gangsta rap cuts. “Weed Song” features Cyco of Insane Poetry and a funky beat worthy of a weed anthem. “Shoot 1st” features Bootleg of the Dayton Family and though his gangsta rap musings aren’t quite as shocking as they were back in 1994, he still delivers an effective verse:

“Bitch I was taught by the best so motherfuck your gat and vest
In the murder game I was trained to aim at tour head, fuck your chest
I’m like a storm coming, gang banging, bullets raining
Neighbors complaining, the way we did that boy is fucked up ain’t it?
I’m a menace to society ready to ride for Menacide
In Flintown niggas pass away, everyday is a homicide”

Memphis underground legend Mr. Sche comes through for a verse on “7th Symphony” though he surprisingly doesn’t contribute the production. The beat change in the song is interesting, but ultimately disappointing as Sche spits over a slowed down version of the Triggerman beat. The ultimate feature on the album, and one which casual fans are most likely to tune in for is “Drugz Finale.” I assume is a remix to the original “Drugz” which was featured on a previous Menacide album of the same name. The track doesn’t disappoint, on par with the best tracks we’ve heard from D-12 though Menacide does pale in comparison to both Proof and B-Real.

Overall, “Street Symphony” is an enjoyable album even if it lacks originality. The mix of good production and over the top gangsta raps allows Menacide to separate himself, if just a little, from the average gangsta rapper. Despite its gangsta subject matter, it is different from the current gangsta rap product as you won’t find any songs dedicated to balling or material things. This fact alone may be enough for a lot of gangsta rap fans to tune. For those still on the fence about Menacide, peeping songs like “Drugz Finale” and “Shoot 1st” should give you a good idea of whether his hardcore antics are for you. The included DVD chronicling Menacide’s career should also be considered as at the very least you’ll be getting plenty of bang for your buck.