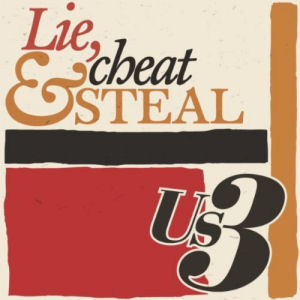 2009’s “stop. think. run” was a welcome return of Us3 to U.S. shores. Geoff Wilkinson had never gone out of business, and in fact was quite prolific in producing new Us3 material, but the all too familiar malaise of music industry politics prevented a lot of material from reaching an audience outside England. Many people mistakenly believed the group was a one-hit wonder who achieved its greatest fame in 1993 and then simply bowed out at the height of their popularity to rest on their laurels. Anyone who can speak of Us3’s catalogue or their main man Wilkinson can tell you nothing could be further from the truth. He is relentlessly driven to fuse hip-hop with jazz, funk, soul and rock ‘n roll. In his way he is trying to achieve the same thing the late great Keith Elam set out to do on his “Jazzamatazz” series – open minds while at the same time creating jams that open dancefloors to the good times.

Lest one get a mistaken impression, that doesn’t mean Wilkinson’s albums as Us3 are music without a message. While his initial and to-date biggest hit was a light breezy affair that encouraged heads to dip and flip, some of the messages of late are a serious trip. Wilkinson has dropped this explanation of why his latest effort seems titularly aimed at corporate greed: “I’ve become increasingly disillusioned by the people we, as children, are traditionally brought up to look up to. Politicians, police, business leaders, sportsmen, religious leaders, etc all seem to be up to their eyeballs in corrupt practices. The gap between the haves and the have-nots is widening at an increasing pace. Is this what a democracy should look like, where it’s ok to lie, cheat & steal your way to the top?” If this sounds like Occupy Wall Street to you then you’re probably part of the 99%, not the other 1%.

While the name Oveous Maximus may sound like the leader of a cyber-Roman garrison on an alternate Earth in Doctor Who, this particular Us3 contributor is from the Bronx & Washington Heights. The funky slap bass and crispy hi-hat to go along with his vocals on “Ghost” are silky smooth. If the impression you’re left with from listening is that you’re chilling in a smoke-filled jazz cage, that’s got to be what Wilkinson was aiming for – I see it like a black and white film.

“Another bag of Louis, to hide all her demons
In God she trust so the money she believe in
She look so happy but looks can be deceiving
Cause all that flashy don’t take away the tears when
Past is tattooed all up in her dome
Flights in the morning going out to Rome
Looking at the art but she doing it alone
Cause she don’t need Caesar to run her own throne
She moves like assassins, all black everything
Walk in the room got the whole place looking
Little do they know that she about to choose one
She gotta do it now before the moon can loose ’em
But she a pro at rocking the boat
Breaking hearts from coast to coast
The wallet gets lost for most
And that’s when she goes for Ghost”

Akala on the other hand is a well-known UK poet and label owner described as a cross between Gil-Scott Heron and Saul Williams. He’s the other half of the vocal contributions to this album. Our readers from theUK Month ought to realize that it’s really not any more difficult to discern his English accent than some rappers with regional dialects in the U.S.A. – maybe easier in a few cases. They’ll certainly find a familiar refrain to “The Ring,” as heavily hammered ivories tickle the eardrums while a DJ scratches DMX screaming “C’MON!” This sets up Akala’s vocals nicely:

“The Ring is complete, The Ring is connected
The Ring is karma, fulfillin a death wish
The Ring of power, a powerful disciple
No start end in the space on the spiral
The Ring of truth, The Ring of lies
The Ring is neither, cause open eyes
See sight is not seeing, the eye, alone
The job, the car, the home, the phone
But feeling – The Ring with no end or start
But of which, I am the tiniest part
The Ring is us, you and I”

Make the cipher complete Akala, and share your wisdom as a prophet and a poet. Akala is those things and a philosopher too, not self-defined and certain, but self-questioning and reflective – asking “Who Am I?” instead of affirming it with “Who I Am.” He wants to know if we’re “physical flesh or spiritual energy,” and it’s always a question worth asking. Oveous is more of a provocateur, not asking questions of himself, but writing odes “to the people that never been free” on songs like “Wild West.” He’s rabble rousing and doing a fine job of it. Occasionally he’ll chill and do a jam for his fam like the Washington Heights anthem “Uptown,” his usual M.O. is to sound like a revolutionary on songs like “I Feel You.” “If the pain feels right, how can I live wrong?/When I tell you that I’m here for you, it’s love.” You go O.

Akala does have his fiery moments too. The hard hitting “You Can Run But You Can’t Hide” is a tongue-twisting delivery of defiance set to an eight-piece live band that knows how to jam all while Akala rails against “the injustices of history.” He’s even more direct on the brassy horny horn funk of “Puppets,” which is a parable about how we’re all being pulled by the invisible strings of our lives, often in the wrong direction. “Are you the puppet, or are you the puppeteer?” Guess he’s pretty philosophical too. In the end this ends up being a case of East (New York) meets West (London) or West meets East depending on how you choose to look at it. For this reviewer I choose to look at it as pretty damn funky and refreshing. It may not trip the fantasia light fantastic, but it holds my attention from start to end.