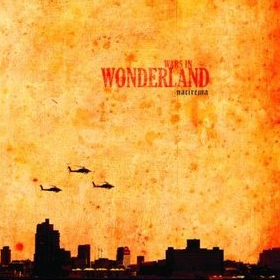 For those of you who haven’t read it, Horace Miner’s “Body Ritual Among the Nacirema” is essential to understanding this rapper. The name is a way of saying that Nacirema operates on another level than other rappers, a mind so advanced that he sees himself as being from another universe. It’s an ambitious pretense for any rapper, but Nacirema seems ready and willing to take it on.

Musically, his mission of differentiating himself is a huge success. “Wars In Wonderland” is full of dark, murky backgrounds that recall 90’s Wu-Tang and Mobb Deep more than any of today’s mainstream groups. The sound here is punctuated by slow, spare beats and lonely music notes. Every song is carefully composed, to fit Nacirema wonderfully, establishing an otherworldly atmosphere. There’s a fairly wide selection of producers here, including Nacirema, but the sound of “Wars” is remarkably consistent. They vary enough to stay interesting, but even wider departures like the swaggering “Barking March” work well, still giving off the perfect sonic vibe.

While the music here is great, it’s only amplified by the presence of the lead rapper. Thankfully, it’s perfectly suited for him, as Nacirema is just as abstract and unusual as the beats. Other than the engaging “And She Saidâ€¦” Nacirema can barely seem to stay on theme. His raps consist mostly of 2 or 4 bar statements that seem to have little to do with each other. It makes for a very confusing listen at first, but the connections become clearer after a few lessons.

The best part of this album is how Nacirema interacts with the music. He’s very comfortable throughout the album, but some beats propel him to even greater heights. The morning soul samples of “Get By” provoke a reflection on the same, while the more melodic “And She Saidâ€¦” receives one of the more personal stories on the album, one of an abused would-be love interest. However it’s the stronger production that ignites a fire within him, as seen on thundering “Beetle”:

“I’ll swallow tubes of bird flu and spit a pandemic category verse
Enriched with lines of ear piercing words
Sharpen swords of wars fought over past religions
And dip them in a mix of vixen saliva and black widow venom
And Ill spit em like Gods hands pressed against my chest
Pushing out the very breath until there’s none left
And they bottom benefit the wicked, received knots in lifelines
While our culture helps kill us off like assisted suicides
Fingerprint the infected and oust the infamy
Storm your infantry with the sounds of malicious symphonies
Its the most vicious that would travel back into time
Catch the bomb of Hiroshima and throw it back into the sky”

The dark, unpolished beats and Nacimera’s abstract verses make “Wars In Wonderland” destined to become something of an insider experience. That said, no fan of grimy RZA-esque beats would be disappointed by this. It’s an album that succeeds in impressing people who are already attuned to the aesthetic, and a great one in that sense. Whether looking for some abstract, dark hip hop, or just a different experience, “Wars In Wonderland” isn’t a bad addition to any record collection.