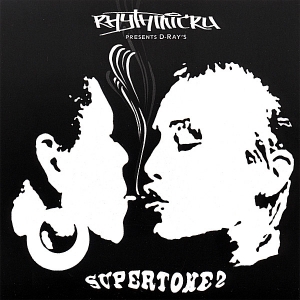 “This is the underground.” Whether you like the Rhythmicru, or “Supertoke 2” will probably depend on whether that statement interests you. “Supertoke 2” is as underground as it gets, sounding as if it were literally made in some kid’s basement while the group was writing and passing blunts. It’s a throwback to the musically minimalist, lyrically dense hip hop of the 90’s, utterly lacking the gloss of rap’s past ten years.

Because “Supertoke 2” lacks in big budget spending, the Rhythmicru has to make up for it in pure creativity. The album sees them defiantly bucking popular hip hop song formulas and traditions for a more freewheeling approach. Gone are the 16 bar/hook/16-bar formulas, the R&B hooks, and popular guest appearances. They’ve been replaced by mid-song beat changes, impromptu freestyle sessions, and an easy group chemistry that produces a very consistent album despite the changing voices.

At the same time that they embrace some of the underground’s biggest strengths, they inherit some of its biggest failings. There have been some amazing minimalist beats (the RZA comes to mind), but for every great one, there are ten that are lackluster, where minimalist is a fancy term for “weak.” It’s nowhere near a ten-to-one ratio here, but many of the beats lack personality, simply providing a background for the rappers to flow over.

As for the rappers, I can’t say I know them all by name, but they generally perform well. None of them are particularly mind-blowing, but they share common themes. There’s a typical disdain for fakers that remain nameless; bragging about your skills is a much higher art form than bragging about your money. With that in mind, most of the topic matter is about how good they are, which wears thin after awhile. 90% of the album dwells on what’s real, how real they are, and why they’re so great.

At 22 songs “Supertoke 2’s” biggest problem is staying fresh. Their approach is fairly unique in today’s rap scene, but the length of the album causes them to overextend themselves in some places, while getting lazy at others. Taking off six or seven songs would serve to trim the album tremendously, while keeping making it’s better moments fresher. The mid-song switch-up of “Blow Up the Spot” and the campy, haunting landscape of “â€¦And Purple” would stand out much more if they weren’t crowded by so many songs that are mostly different versions of themselves.

Overall “Supertoke 2” is still an appealing album to anyone who considers themselves underground hip hop fans. It’s a throwback to the mid-90’s underground tradition without just being a bad reflection of it. Unfortunately, the “Hip Hop Head(s)” that the Rhythmicru is appealing to have all heard better, shorter, and more inspired underground albums. “Supertoke 2” is refreshing, but hopefully, it’s only a preview of what the group is really capable of.