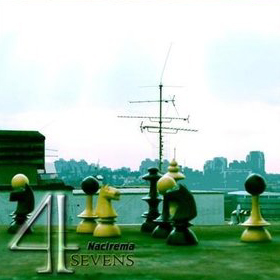 A couple of weeks ago, I finally got my own Costco card. To the amusement of my friends and family, the name simply states “JAY SOUL” – you know, like how in “Superbad” Fogel’s fake Hawaiian driver’s license simply states “McLOVIN,” alongside an awkward cheesy photo? That’s me, I’m the new “McLovin” of the wholesale trade industry… Anyway, Costco isn’t as big a deal in the UK as it is in America. There are only a few around, and when you try to explain to people the philosophy, they either try and convince you to “get them in” or they look at you as if you belong to a cult. It is exclusive. An inside job. A well-kept secret.

Which is exactly what Nacirema is going for – he is clearly not a mainstream artist, but nowadays in hip hop, that can actually be a bloody good thing. Back in October 2007, he received a glowing review for his album “Wars In Wonderland” – and, as a result, his record company sent along his previous effort for consideration, “4 Sevens.” As I haven’t heard his latest effort, it serves as no reference point to me – and therefore, I can judge this album on its own merit. And here is the good news – it is solid and, occasionally, spectacular.

It starts of with a dark and somewhat understated introduction, which leads into the brooding “Voicebox” complete with excellent grungy chorus. “Dig” continues the lyrical assault, and whilst Nacirema can definitely spit some complex rhymes, it is clear that at this stage of his career, he is a diamond in the rough, as sometimes he overreaches, resulting in an occasionally clumsy flow. Luckily this isn’t the norm, and, when coupled with his somewhat backpacky good intentions, results in meaningful lyrics. The beautifully composed score to “Dead Music” (produced by Figure.I.Que) really brings out his voice, and contrasts sharply with the following track – the ridiculously catchy “Red Shoes.” I have actually been rinsing this song for a few weeks now, and haven’t come close to get sick of it. A simply gorgeous soul sample underpins Nacirema’s lament to love’s labour’s lost. If you do one thing, somehow get a hold of this song, anyway you can.

Other highlights on this fourteen track LP include the Pete Rock-esque “Disposition,” the driving military beat of “RSVP” and the Rip the Jacker-ish “Pivot” – and this trio are all in a row. Unfortunately, Nacirema’s vocals get subdued somewhat by the engineering, or perhaps it is a slightly tentative delivery – but with experience comes that ballsy self-confidence. Perhaps most beneficial of all, the album clocks in at just under 48 minutes – thus allowing you to actually digest songs in their own right.

Nacirema clearly has talent, and even handles production on about half the tracks on this album – whilst there may not be classics to burn, he certainly doesn’t fumble at all. The biggest compliment I can pay him is that I would actually go out of my way to see what happened next (well, I already know that this site gave his follow-up album a good review) and â€œ4 Sevensâ€ certainly deserves 3 Sevens as a score. Whilst music tends to get forced down our throats nowadays, it is always a pleasure to stumble upon a welcome surprise – a well-kept secret, if you will. A bit like my local Costco.