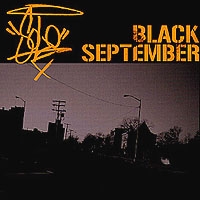 This is the part of the story where the narrator would say something like this:

“Jay Soul began his review of â€˜The Black September EPâ€™ by a young 20 year old debutant called Solo.X and already knew in his mind what he was going to write â€“ something along the lines of solid music, raw but passionate young MC, heart is in the right place, room for progression, check out this 5-song EP. Little did he know what fate had lined up for the intrepid reviewer.”

“Little did he know…” That line just gave away the game â€“ maybe not the whole story, but at least the fact that there may well be more than meets the eye.

There were clues building up throughout my experience of this EP:

Clue 1: In the hallway. Upon first receiving the envelope containing this CD, it felt heavier than normal. This was because the CD came shrink-wrapped, adding 0.12g to the weight; more significantly, the promotional material was on CARD, not paper. Hmmm….

Clue 2: The upscale promotional material. Professional photos were used â€“ black and white shots, at that. A lot of black ink must have been used; ink costs more than printers nowadays. The biography, written by Solo.X himself, looks to have been written by a young, raw MC who has little grammatical skill. He also claims to release this on his own record label. Wait, thereâ€™s more.

Clue 3: The proof is in the pudding. Popping the CD itself into the player, the game is up. He is a pretty lyrical MC, with good command of the English language. The producer, called RU, is referred to in the bio as “my friend [who] does all the beats on the record” â€“ the language of a 5 year old, betrayed by above average skills on the mic. AH-HAH!!

I smelt a rat, a low down dirty stinking stench. This MC may be young, but heâ€™s clearly dumbed down the promo material. The music by his “friend” RU is solid throughout, and a couple of the songs, such as “Glass House Theory” and “Move On” are a cut above the usual. He also happens to be part of a group, The Braves. Their debut album is going to feature Canibus. Yes, THE Canibus. Plus he is allegedly doing this on his own record label. The rat had better hang himself beneath the floorboards before I take my sledgehammer to his crafty ass.

Solo.X has obviously been reading up on his marketing material. He has emerged as a relatively fully-formed artist, certainly for a 20 year old in the hip hop game. He has got good lyrical game, strong beats, some great punchlines here and there, and above average subject matter. He must also be quite wealthy for the average kid, as the path he has taken isnâ€™t cheap. There is NO SHAME in that. But that would arouse suspicion, so he has done what record companies frequently do, and make him seem more raw/naive than he truly is. I almost got taken in, but when youâ€™ve been in this game as long as I have, you learn to recognise the signs. Stupid thing is, just like most crimes, he really didnâ€™t need to do it â€“ it just must have seemed like a good idea at the time. Play the game straight next time, kid.