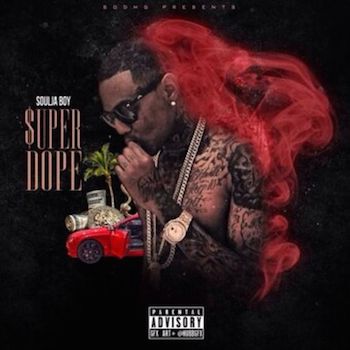 Soulja Boy has never been heralded as a critically acclaimed emcee. One could argue that he has never been regarded as an emcee for that matter, and yet somehow he is still making music that somebody, somewhere deems marketable. It’s fair to say that Soulja Boy is a one-hit wonder, relying on a gimmicky dance routine and a simple rhyme-scheme that any fool and his dog could lip-sync along to. “Crank That” served a purpose and for that, even KRS-One admitted that there was a place for nursery rhymes and childish antics in hip hop. Not every rapper could, or should be a lyrical architect crafting masterpieces with every verse they pen. Where Soulja Boy has lost momentum, and any smidgen of respect that he garnered, is in his exposed lack of talent. One-hit wonder artists often record numerous albums, but the ones that don’t, know they can’t sustain multiple records trying to get lucky again. The fact that Soulja Boy is now releasing his 39th (!) mixtape in 7 years shows how hard he is trying to grab hold of another craze, yet inevitably misses and starts the process again.

Having recently reviewed Nas’ “Illmatic XX”, I feel like I’ve gone from the opposite end of the spectrum, not only musically, lyrically and artistically, but morally. This album is either ironically, or moronically titled “Superdope” for a reason, and there’s no denying the potency of it – but much like drinking a bottle of bleach, this doesn’t just leave a nasty taste, but will leave you hollow (and dead) inside. “Superdope” is the worst hip hop record I’ve ever heard – it’s dumbed down to the point of being hazardous to your health. The opening track (“Streets On Fire”) is simplistic, even by Soulja Boy standards – and isn’t helped by being Autotuned to the point of sounding muffled.

Much of what holds back “Superdope” is the repetitive hooks that never feel memorable – “Time Is Money” is simply a reminder that you could have been doing ANYTHING more productive than listening to that song. Holidaying in a mineshaft, staring at a metronome or listening to Soulja Boy’s debut all sound like worthier ways of spending time (and money). It’s not just repetitive, but “Time Is Money” actually has random gaps in the song where Soulja Boy has just not bothered to complete a verse, or structure his writing correctly. The whole project sounds sloppy; “Hot Now” possesses vocals that are twice as loud as the instrumental, only highlighting the lack of any real ability to ride a beat.

The most alarming aspect of this mixtape is the fact a legitimate hip hop legend, Busta Rhymes, makes an appearance on “Fuck That Flo”. There’s no denying Bus-A-Bus isn’t quite the powerhouse wordsmith he once was, but he still commands respect and is more than capable of tearing a track to pieces. Remarkably, Busta throws down a verse that evokes memories of his earlier work and despite not worth sitting through an hour of Soulja Boy’s dreariness, it’s a straw to clutch at should you choose to give this a listen. Despite my reluctance to pick up headphones for a while after, there was a couple of moments where I found Soulja Boy could have made this something other than the horseshit it really is. “Coming In” is a strong production that actually sees Soulja Boy rapping without having written his verse in crayons. Unfortunately, it’s let down by another droning hook, but if you had to choose a track to hear Soulja Boy’s rhymes, this would be it.

The hype train left Soulja Boy back in 2010 when his third album failed to reach the platinum sales of his debut, and with mixtapes appearing on an almost monthly basis, Soulja Boy has diluted his product to such a degree that it has stopped being music and started to become noise. To call it an artistic descent would be an insult to artists – with “Superdope”, Soulja Boy has fallen off from a cliff in to a bottomless pit.