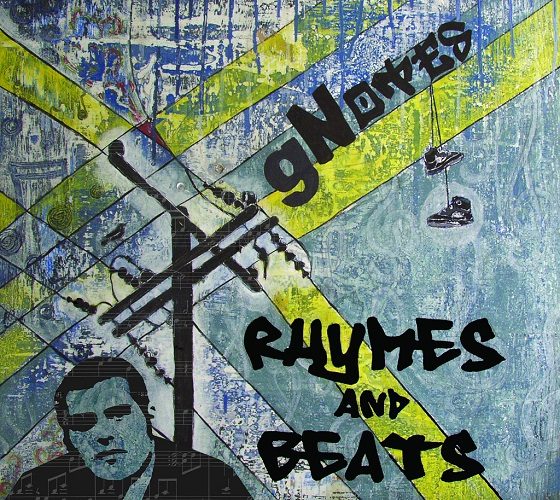 Some things in life take time to appreciate. Not a new car – they tend to lose (remember this) a third of their value as soon as they are driven off the forecourt. But certain relationships, works of art, anything really. Take, for example, this album by Gnotes – the first letter is silent so pronounce it “Notes” – which is apparently his fourth LP. I’m not going to pretend to have heard the first three, and after the first listen of his fourth album, I instantly knew what he was trying to achieve but didn’t feel he would succeed. I always take delight in being proved wrong when it comes to any music that eventually exceeds my expectations – and the more I listened to “Rhymes and Beats,” the more I realised that Gnotes is a damn talented artist. It simply took a little time for me to appreciate it.

Musically it is innovative and pleasing, with the man himself handling the lions’ share of production; but really and truly, it his lyrics that shine here. It may take you a while to get used to his vocals – initially (and falsely) grating on the more boisterous tracks, one can imagine his live shows to be electric, whilst his more relaxed delivery on certain numbers allows punchlines to breathe. In fact, calling them merely “punchlines” is a disservice, as some of the lyrics may well take your breath away: “Please let me fall with some tact / I’ve got bags under my eyes and they’re already packed” got me hook, line and sinker. It is also included in the album liner notes, alongside a hot quote from each song – but I didn’t know this until after, so this is an even more impressive lyric. What is even more evident is the care and effort put into virtually every bar in every verse, in each and every song – you can tell that Gnotes burns with a passion to be the best that he can be, and translate it into every word. Not all the songs stick, but at least he takes his duties as an MC seriously.

The beats range from excellent to average – the drum patterns, sonic clarity and engineering are superb, but a small number of the tracks suffer from an inexcusable lack of melody. Only a few, mind, as most of the music on offer is solid enough to make the album a truly worthwhile listen. More importantly, the replay value is impressive, mostly owing to the amount of choice verbal skill displayed by the MC. The fourteen-track album as a whole clocks in at just under 48 minutes, and there is a lack of real filler on here – Gnotes always manages to steer the foggier beats away from that iceberg, and the live excerpt at the end is a nice touch too.

Having thoroughly listened to this album, it is easy to recommend it as an LP that is worth your money – as long as you appreciate lyrically-driven hip hop and MC’s who take pride their rhymes. He isn’t a perfect commercial machine, but Gnotes is someone that can take you on a journey, make you feel what he is saying (look at excellent cuts such as “Sun Don’t Chill” and “Tower of Babylon”) and it is obvious that he could rock a pretty mean live show too. Don’t expect a slew of hit singles to emerge from “Rhymes and Beats” – but it is worth a punt, and investing in an artist like this is really what helps to keep hip hop alive. Cheesy, I know, but this is definitely one class that you would be advised to take Gnotes on. A most welcome surprise.