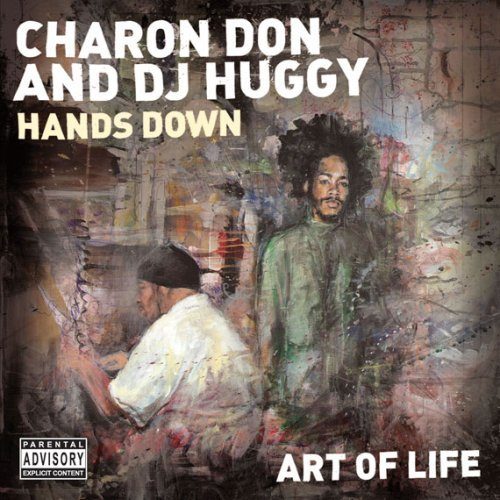 Hands Down :: Art of Life

Quick, name a hip-hop artist out of Pittsburgh, PA. You can’t? Well, let me give you two – Charon Don and DJ Huggy make up Hands Down. Having met in high school, the duo has been active on the local scene since the late ’90s, as members of crews such as Justuce and Illogic Rumor and by releasing the full-length “Mental Combustion” together in 2001. One year later they signed with Good Hands Records, which lead to appearances on Chief Kamachi’s “Cult Status” and Reef the Lost Cauze’s “Feast or Famine,” as well as to Charon’s stint in Kamachi’s JuJu Mob project. Meanwhile, Huggy claims production credits for established artists such as Black Rob, Baby, Camp Lo, and MC Eiht.

They have yet to catch the attention of the general hip-hop public, and leaving it open whether they want to be known as Hands Down, a name they adopted more recently, or as Charon Don & DJ Huggy, might be detrimental to making a name for themselves. If after this review you should decide to investigate further, don’t forget to search for ‘Charon Don & DJ Huggy’ as that seems to be the artist name retailers file them under. Having actually listened to the album, I can attest that the group name is Hands Down. With that out of the way, let’s delve right into “Art of Life,” the album that ought to propel their name(s) past the Pittsburgh city limits.

Clocking in at 76 minutes, “Art of Life” is an ambitious longplayer that aims for more than putting its protagonists on the map. Charon Don does an admirable job as a committed rapper, his voice almost constantly raised, with a pitch similar to Rhymesayer Brother Ali. While Ali balances urgency and nonchalance quite effectively, Charon sometimes is a tad bit too eager, but given rap’s current lack of emotive voices (respect to Kanye West for being the most prominent exception to the rule), his commitment is welcome. Speaking of ‘Ye, the duo laces “Ready or Naught” in best West tradition, DJ Hug laying down a layered rhythm track and letting it interact with a gospel- tinged choir gracing this quasi-theme song that should be a staple of Hands Down live shows by now. Vocally, Charon takes command like he’s supposed to, arguing, “You can’t pen what I pen / unless you been where I been / from begin to the end.”

The first ten tracks of “Art of Life” cover an impressive range of musical styles, no two tracks sounding the same despite the entire album being produced by the team of DJ Huggy & I.D. Productions. “Just Wanna Know” derives its soulful shine from the ’80s, the anthemic beat being topped off with lots of scratching. The lead single “Up in Here” is a rugged club joint with hard-knocking drums and driving organs that unites PA, GA and NJ with appearances from Lil Scrappy displaying his A-Town drawl and Rah Digga pulling no punches with her Brick City spit while Charon isn’t reluctant to rep his hometown, “holdin’ Pittsburgh down / black and gold on the map, it’s a Pittsburgh sound.”

Although you won’t be able to pin down “a Pittsburgh sound” after listening to “Art of Life,” you will have to give it up to Charon Don for sounding just as comfortable over the slick, booming “Alphanumeric” as over the sparse, thoughtful “Ghetto.” Albeit far from original by now, “Stop (Best Beware)” competently continues the trend of rhyming around vocal samples. “Frequency of Love” is a mature relationship song last but not least thanks to the classy production and soothing R&B vocals courtesy of BeLove. The conceptual “Anything Can Happen” is backed by suspenseful orchestration combining light guitars and heavy drums, while “Act Like You Know,” a JuJu Mob flashback featuring Chief Kamachi, is a cinematic track of the highest order suggesting that DJ Huggy has a future in soundtrack scoring.

On the flip, “Art of Life” as a whole isn’t particularly adventurous musically, “From Around Here” for instance starting out interesting with what sounds like a simple but captivating White Stripes riff before it abruptly changes into a typical modern day rock/rap hybrid based mostly on synths. Since the cautioning chest- thumping Charon Don and guest Wiz Khalifa engage in isn’t anything to write home you might be tempted to fast-forward, in which case you would miss the attached interlude, an impressive spoken word workout:

“…drunk off my heritage and melanin
Here it is, the rebel who peddles and sells medicine
It’s so evident, next level’s my residence
Dress metal with clips that spit, I bet that settles it
Talk to the dead but far from bein’ devilish
Talk to the kids, it’s all for their development
Robbed of my spirit, then given a skeleton
thrown into an earth with one verse to make the heavens split
You see I’m heaven’s gift thrown into a hellish Pitt-
-sburgh is on some selfishness
buggin’ like there ain’t wealth to get”

It could be Charon Don’s background in spoken word that prompts him to make some very conscious decisions in terms of how he wants to emphasize certain parts. This is not a rapper who sticks to one pattern but one who works with inflections and tries to develop a signature flow, which makes the relentless rhyming spree more palatable. Last but not least there’s a poetic quality to many of his lyrics. As he says of himself, “I’m a poet first / You should know this if you noticed the verse / and how I wrote it with the motive to work.”

The first impression one gets of Charon Don is that of a creative spitter. As the album progresses, however, it becomes evident that the 26-year-old has bigger fish to fry than MC competition. From quips like “You hustle gram to gram / I hustle jam to jam / which hustle you think’ll last?” to entire songs where he for example explains his philosophy on freedom (“Free”) or adds an Afrocentric twist to the “Dear Mama” theme (“Motherless Child”), to this Don la Cosa Nostra (literally ‘our affair’) means what concerns the community as a whole. One highlight is the duet with Killah Priest, “Observers,” back by a serene beat that perfectly fits the rappers’ verbose contemplations. As Priest once said on a famous album, “I judge wisely, as if nothing every surprise me,” and neither is it a surprise that Hands Down themselves have a song called “Judge Wize.”

There is a growing number of what was once called conscious rappers. Like many of them, Charon Don possesses a street edge, very much in the tradition of the Wu. Without being overly self-righteous, he’s sure of himself, boasting, “I rhyme like I invented hip-hop,” and, “These other cats is right now, but my style’s forever.”

Timeless “Art of Life” is not. In some parts it may in fact even be already slightly dated, concerning sped-up soul samples or the overuse of the gunshot button in “Stop (Best Beware).” Neither have hidden tracks turned out to be such a good idea, especially when they’re basically a waste of brilliant songs that could and should stand alone. Finally there’s the issue of how much rhyming a rap record can bear before it just becomes too much. But all things considered, Hands Down put forth a very solid effort that casts a favorable light on hip-hop in 2007. And since “Art of Life” according to the artists is about “more notes, more quotes,” I leave you with the following thought from “Make it Good”:

“Know why I spread hip-hop like it’s nobody’s business?
Cause I live hip-hop like nobody lives it
Ghetto music, yet the ghetto misused it
but if they take away the music, then the ghetto would lose it”