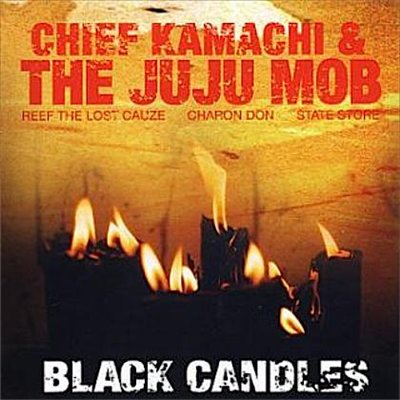 After claiming “Cult Status” last year, it makes sense that the self-appointed Mic Messiah Chief Kamachi would establish his proper cult, in hopes of increasing a potential cult following. His brethren in faith are Reef The Lost Cauze, Charon Don and State Sore, and together they form a Pennsylvania state team that combines the precise flows of G-Unit, the polysyllabic stamina of The Diplomats, the troop morale of Killarmy, the fervor of Outerspace, the spiritual vocabulary of the Gravediggaz and the disdain for commercial rap channelled through battle raps as practiced by the Extended Famm. That’s quite a few loose ends to tie together, but somehow the JuJu Mob manages to put it all into a cohesive form. If you let State Sore tell it, musically “it’s manic depressive music that animals dance to” while lyrically “it’s ghetto lectures for poor people who can’t afford no blessings.”

For the critic, “Black Candles” can only be grasped with the broadest terms. JuJu Mob is four rappers, three from Philly, one from Pittsburgh, making full use of the traditional crew outfit while conceptually continuing down the path already laid by one of its members. That’s the only method to the madness here. The details don’t make much sense, what makes sense is the line-up, the solid skills the foursome brings to the table, and the music they chose to rap over.

Young Jedis ready to switch to the dark side of the force like Anakin will have more to latch on to than the fact that these rappers don’t discuss the gloss, the shine and the bling of their rims, their platinum plaques and their jewelry. “When I walk you hear the theme music from _The Omen_,” Reef boasts, but the faux classical strings and otherworldly voices of “Black of Dawn” already make for a familiar rap theme for him to introduce his crew to:

“Imagine if the Prince of Darkness
fathered a four-headed monster
and sent it to conquer the black market
And after the slaughter the monster grew stronger
broke free from the chains, held in hell no longer
[…]
This is the team to beat, my money’s on the Mob
The jig is up, your squad is a facade
Y’all nothin’ special, I fuckin’ stretch you
You’ll have to wear a mask for the rest of your life like MF Doom”

Reef’s very first verse serves as the blueprint for much of the following onslaught carried out with a double-edged sword of battle raps and pop culture references from the gothic side. The Mobb Deep influence is strong as well, showing itself in incisive lines like “This like gettin’ your wrist slit, you can feel this shit.” Like the Infamous, the JuJu Mob hopes for “heavy airplay all day with no chorus.” Thus, the DJ Mighty Mi-produced “No Chorus” is the perfect platform for the battle-hardened Reef to voice his frustration with the rap game:

“I’m all about beef like Tony Luke’s
This rap game is filled with phony spooks
weirdos, white boys and corny groups – which one are you?
I feel none of you, cause I don’t like my feelings hurt
You bitch-made, can’t even conceal your skirt
I’m the pastor of the illest church”

Kamachi channels 50 Cent on “Radios,” while the ever-quotable Reef burns down stations by lighting playlists on fire and warns competition, “Your little world, I’ll dismantle that / the energy of ancestors, I channel that / So whoever number one, we on your heels like sandal straps.” Unfortunately, simple skills alone don’t get you very far in this industry. There comes a point on this album where you know that the JuJu Mob has no tricks up their sleeves left. You know their MO, and you won’t be surprised that the temptingly titled “Angel Feathers” isn’t a grand finale, but just another track that happens to be the last one. The internal song contest is clearly won by “Voodoo Doll,” a bitter, misogynist version of Bobby Digital’s “La Rhumba.”

Solid songwriting is also displayed on “Never Walk Alone,” a scenario where Reef gets shot and Charon takes revenge. The latter steps out of the shadow of his partners with the solo track “Situation,” a personal piece climaxing in “I’m every blackman’s history / and every blackman’s memory / Nah eff that, I’m every blackman’s mystery / Respect that like a blackman’s mysery.” But the political undertones are faint on “Black Candles.” “No Hard Feelings” has a couple, Kamachi’s “Hey God, this is Kunta talkin’, so don’t try to tell me Toby wait” or Charon’s “The industry’s a slave-made slave trade / Jacob [the Jeweler]’s got the chains for the paid slaves.” But you’re much more likely to bump into politically incorrect statements made by Kamachi, who apparently can’t help himself when it comes to hurting religious feelings.

You could speculate all day about what exactly makes Chief Kamachi and his JuJu Mob tick. State Sore probably sums it up best when he explains how he’s doing it “for the love of crafty rappin’ / meanin’ I’ma earn my earnin’s / from issuin’ out some of the most burnin’ sermons.” While most of the crew’s self-descriptions aren’t really applicable in real life, they certainly make for entertaining rhetoric, whether Reef argues, “If your flow is water, then JuJu is crushed cubes,” State Sore claims, “I don’t kitty-kat with the beat, I straight dog it” or Mach’ would have you believe that “Messiah make history records / with the ancient mystery methods / and then I spit the wisdom of all kingdoms connected.”

Ultimately, JuJu Mob manage to make satisfying music in spite of the not particularly convincing concept they came up with. There are few musical surprises (one being State Sore performing the chorus to “This” with a rich singing voice), but what’s there is solid from beginning to end. Detailed production credits were not available for this review, but the newcomers who apparently make up much of the production team have provided some nice beats to add to their resume, whether it’s the Alchemist-like “Akbar” or the Eyego-produced “This,” which carries a spiritual vibe missing from the lyrics. Their most clubbish offering, “Right!” will probably not get many spins, but E. Dan’s (of Pittsburgh’s Strict Flow) “My Squad” with its hymnic ’80s pop rock touch might and “Voodoo Doll” definitely should. I know at least four guys who would find some perverted delight in it.