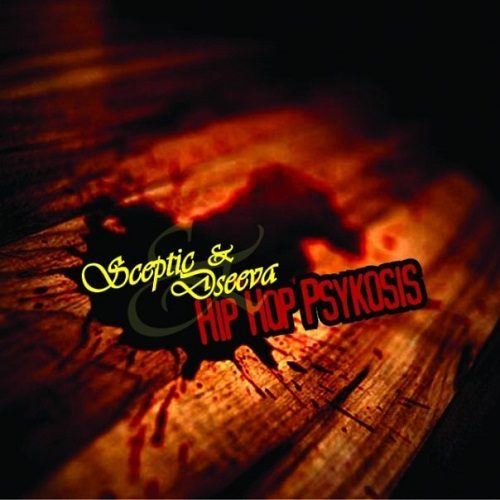 “Hip Hop Psykosis” is the debut album by Sceptic and Dseeva, part of Sydney, Australia’s KWITS crew. The album is totally Do-It-Yourself: Dseeva handles all the production, and they released it on their own label, Sub Conscious.

The most striking thing about the disc is Dseeva’s production. He forgoes the standard funk breaks for a colder, stripped-down electronic sound. It is a combination of Lil’ Jon’s aggro synths, El-P’s paranoid sci-fi beats, John Carpenter’s soundtrack work, and 80’s synth pop. The result is music that is ice-cold, unsettling, and a lot more interesting than your standard in-house production. “Beat Em Down” layers organ stabs over ticking hi-hats into something that is straight out of a horror movie; “Anxious” puts a dark twist on the G-funk synth whine; “Survivors Guilt” sounds like Depeche Mode by way of the Magnolia Projects. The overall effect is gritty hardcore rap meets Miami Vice. I’m thinking Rick Ross or the Clipse may want to use Dseeva on their next project, because his beats would be a perfect compliment to the 80s cocaine nostalgia of their rhymes.

Lyrically, the duo follow the mantra “write what you know.” They avoid trying to mimic American gangsta cliches, and instead give a distinctly Aussie spin to hip hop, both with their thick accents and their subject matter. They are all about getting drunk and rowdy, as songs like “Down For A Drink,” Every Man Bleeds,” Beat Em Down,” and “Fucking Oath Mate” demonstrate. I wasn’t that into Sceptic and Dseeva’s more aggro tracks, but then I’m not a fan of crunk, either.

I liked the duo the most when they would take it down a notch and showed a more mature side. On “Last Words,” Sceptic and Dseeva give heartfelt goodbyes to their families before being led off to an unexplained death. “Soul Traders” criticizes rappers who sell their soul to the majors, only to be pimped by their label. One of the best songs on the album is “Still Chilling,” in which the duo describes their relationship with hip hop:

As MCs, Sceptic and Dseeva have a lot of passion, but are clearly still developing their craft. They sometimes cram too many syllables in their bars, and at points their flow is all over the beat. Sometimes this almost works, and they sound as crazily disconnected as Kool Keith. At other points it makes them sound amateurish and unpolished. It’s not the end of the world, but it is noticeable. In the end, I was impressed enough by what these guys were trying to do to forgive them their occasional clumsiness. They offer up an interesting and very Australian twist on their hip hop, and their love and respect for the music come through on every track.