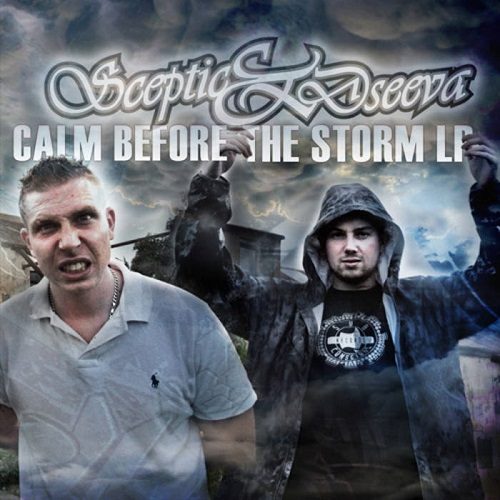 Sceptic and Dseeva :: Calm Before the Storm

This is the second official album from Sydney rappers Sceptic and Dseeva, following their 2007 debut “Hip Hop Psykosis,” and 2010 “Sub C Baby” mixtape, which you can download HERE.

I write this every time I review an Australian hip-hop album, but Aussies make good beats, and Sceptic and Dseeva are no exception. Dseeva handles about half the tracks, with Peeks One, Myth_4, Boomkat, Ben Rosen, A-Drone, Grouce, Entyce, and Petes Beats handling the rest. They offer a range of styles, from the rock influence on “Hip Rock” to the street feel of “Omerta” to the loop-driven beat on “Pants Round My Ankles.” Dseeva’s beats have the dark, stripped-down feel of American street rap, using synthesizers, out-of-tune pianos, and guitars on his beats. There is nothing mind-blowing, but it is all done well.

The songs are a mix of rowdy tracks about shit-talking, getting drunk, and starting fights, and more serious topics. “Realisation” takes the point of view of someone who has just been sent to prison and is realizing what he’s done to his life; “Hey Girl” and “Miss Ya” are tracks for the ladies, while “Shut My Eyes” is the exact opposite, describing a homicidal boyfriend stalking his cheating girlfriend.  My favorite track was “Behind the Scenes,” a condemnation of the backstabbing and two-faced types you meet in the hip-hop scene, only looking out for themselves and never supporting fellow artists.

I gave a favorable review to “Hip Hop Psykosis,” although I noted that their flows were sometimes off beat and amateurish. The same issue reappears on “Calm Before the Storm.” Both rappers have moments where they cook, but they have an equal number of moments where they drop rhymes that are clumsy or off beat. The Aussie accents threw me as well and I couldn’t find a point of reference. At one moment they are boasting about fucking your mother and making their enemies suck their dicks like DMX, the next moment they are coming off like Eminem, and the next track they are partying like Asher Roth. Not that I have to be able to categorize a rapper to be able to appreciate them, but the fact that they were all over the place thematically combined with the my limited knowledge of the Australian hip-hop scene made it that much more difficult for me to understand and appreciate where these guys were coming from.

“Calm Before the Storm” looks and sounds nice, but in the end I wasn’t feeling the rappers’ flow. Fans of Oz rap might want to cop this, but those new to the genre should pick a different point of entry.