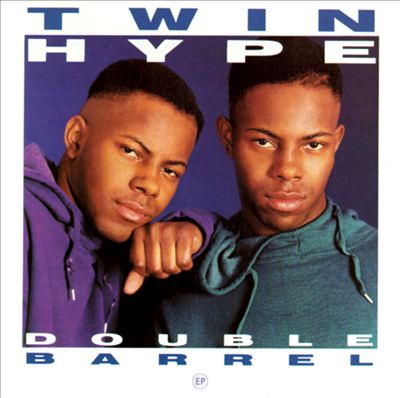 Finding information on Twin Hype is like trying to clip fingernails with a chainsaw – a bloody mess. 1989 saw the release of a self-titled debut album fueled by the success of their hip-house single “Do it to the Crowd.” The song and album made enough of a splash that variouse-mailed me feedback on their incarceration. Regardless the fact they HAVE a MySpace page suggests their prison term is over and they’re looking to break back into the music scene.

Sly (Glennis Brown), Slick (Lennis Brown)and DJ King Shameek (Jose Matos) may be working on new material, but the focus here is on what they did BEFORE doing a prison bid. “Double Barrel” has been in my collection for a very long time – long enough that the gem case is scuffed up and the Profile Records label is starting to peel away from the disc. Hmm – I’d better see if my old DJ Quik and Poor Righteous Teachers albums are in similarly bad shape and consider preservation techniques. Funny how vinyl doesn’t seem to degrade near as much as CD’s do over time. I strongly suspect I bought this CD used second or thirdhand anyway since I wasn’t making mad loot in those days yet I knew pawns who liquidated discs for $5 a pop regardless of the title. This was one of those HAD TO HAVE IT albums for me because I had fallen for Twin Hype all over again when “Nothin’ Could Save Ya” showed up on Pump It Up and Yo! MTV Raps. The raps may not have been stellar by modern standards but they were more than sufficient for the pounding sounds supplied by Shameek and The Hollywood Impact:

“Pump up the boomin systems that’ll bust
New York City’s about to be bumrushed
Shameek and the boys bringin back the boomin bass
All five boroughs are packed in one place
A million partygoers on the set
Imagine the sweat, the bodyguards won’t let
anyone on the dance floor until Twin Hype outta there
And we can go on for about a year
At a jam we hit hard like Bam Bam
So don’t stand still god damn get with the program
Twin Hype records weren’t made to please
wallflowers, Shameek can keep em busy after hours
of going berzerk, backflips and body jerks
Nobody stand still, nobody get hurt
This is a concert, be on your best behavior
Cause nothin’ could save ya”

Sly and Slick are virtually indistinguishable lyrically, which isn’t surprising given you can’t tell who is who from the cover artwork either. I suspect they are IDENTICAL twins as opposed to just being fraternal. What can be distinguished are individual elements of the track that make it dope – a booming bassline, snippets of Suzanne Vega’s song “Tom’s Diner,” an irresistable uptempo drumbeat, anonymous females singing a second hook and the classic old school BREAKDOWN in the middle of the cut. You can’t help but laugh at lines like “girls dance until your hairweaves fall out” yet even a rhythmically challenged nerd like me feels compelled to bust a move when this groove comes on. The twins lived up to the hype of “Do it to the Crowd” and came back with an even STRONGER club song than their first hit. Despite being a crossover jam Twin Hype managed to maintain hardcore credibility thanks to Sly and Slick’s deep booming voices and the fact the song’s theme implied a near life-threatening experience on the dancefloor.

Unfortunately by the very nature of this release being an EP there’s not much material here compounded by the fact 3 out of 9 tracks are throwaway interludes: “Another Album,” “The Counterfeit Incident” and “Rap (It Ain’t Illegal Yet).” The only other song that received any exposure on this release was “Lyrical Rundown,” the B-side to Twin Hype’s “For Those Who Like to Groove” single. Unfortunately Hollywood Impact’s beat is early 90’s East coast album filler, sounding 50% Pete Rock, 25% Primo, and 25% unknown whackness. Twin Hype deliver this supposed lyrical rundown with the enthusiasm of Ben Stein teaching a class of Ferris Bueller’s cohorts. “Yes pistol-whipped, so please don’t slip with the lip/or riff unless you want to be equipped/if you ain’t equipped I suggest you go/you’re just vegetable, I’m a professional.” Professional WHAT? Professional bad rhyme writer, or professionally uncharismatic MC? These lines qualify on both accounts. It’s amazing “Nothin’ Could Save Ya” and this track could co-exist on the same disc – one’s the shiznit and the other’s just plain SHIT.

On the whole the EP is passable despite its age. Even though I’ve knocked Hollywood for being derivative of Pete Rock the horns of “Wrong Place, Wrong Time” effectively set off one of the album’s hardest raps. The short but effective “Something Like Venom” recalls the frenetic sound of the Bomb Squad circa “Apocalypse ’91.” The title track could easily be mistaken for something Big Daddy Kane or Biz Markie would rap over, and I mean that as the highest compliment. Still you can’t help but feel after listening to “Double Barrel” that Twin Hype was the kind of golden era rap group that lived and died solely on the strength of their singles, concentrating on a hype 12″ that all the DJ’s would play and following up with a full release only when necessary. Now that they have a full release from INCARCERATION maybe 2008 will be the year for a big comeback; then again they may go down in relative hip-hop obscurity save for a few reviews like these. Even though it’s out of print the “Double Barrel” EP is going to be a whole lot less expensive than the “Nothin’ Could Save Ya” twelve inch will be. Pick this up secondhand if you can find it cheap.