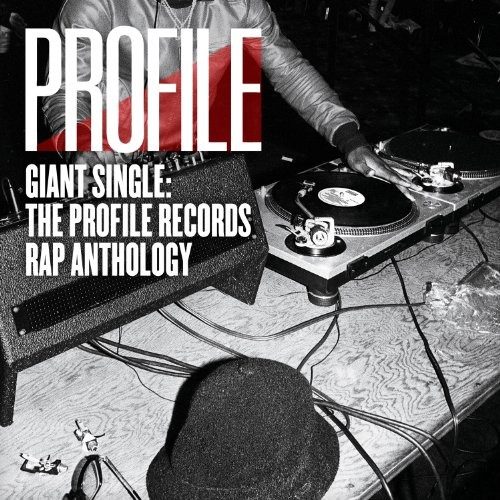 Where to begin? From a personal and a historical perspective I’d begin with Run-D.M.C., the legendary trio from Hollis, Queens, that conquered the world in the name of rap music in the mid-’80s. As any legit anthology should, however, “Giant Single” delivers the tracks chronologically, so that you get the proper ‘historical perspective’ concerning Profile Records. Additionally, writer Dan Charnas and witnesses such as Dante Ross, Kenny Dope or Bobbito tell the Profile story in the liner notes.

Profile’s achievements are extraordinary. It was, to quote Charnas, ‘The first record label to produce true rap “stars” who crossed over to the mainstream. The first to earn gold, platinum and multi-platinum rap albums. The first to get rap videos on MTV.’ How’d they do it? Business aspects aside, what played no small part in this reviewer’s humble opinion was the specific quality of the sound and the overall musical quality.

Admittedly, the Sugar Hill version, Grandmaster Flash & The Furious Five’s “It’s Nasty (Genius of Love),” tops “Genius Rap” in terms of sheer artistry because it goes beyond being a simple ‘rap version’ of a club hit, but Joe Tucci’s rendition of Tom Tom Club’s “Genius of Love” that Andre ‘Dr. Jeckyll’ Harrell and Alonzo ‘Mr. Hyde’ Brown rap over is airtight. The following year he stripped the Dazz Band’s “Let it Whip” down to its bare essentials for the Disco Four’s so fresh and so clean “Whip Rap.” A quintet here, Ronnie D, Greg G, Mr. Troy, Kid Country and Kool Gee introduce themselves and rap music with the words “Hello everybody, how do you do? / I hope you know that rappin’ is music too.” They show and prove by creating a genuine party record, shouting out cities around the country and harmonizing like they were competing with the Furious or the Fantastic Five. If you ever wonder what rap could have meant to these kids turning into microphone fiends, just ponder these words by Ronnie D: “I’ma tell you all somethin’ you all should know / That when they discovered rappin’ they discovered gold.”

As an aside, you’ll also feel like you struck gold if you happen to come across an original copy of 1983’s “Beat Bop,” billed to Rammellzee vs. K-Rob, one of hip-hop’s most mythological moments that would deserve a review all of its own. Let’s just say that Profile gets props for making it more widely available shortly after its initial, highly limited run on Tartown.

The Fresh 3 MC’s’ ode to freshness, “Fresh,” didn’t just etch itself into a generation’s memory with its “F-r-e-s-h / Fresh, fresh, fresh / Yo, that’s fresh” hook, it’s also a well flipped concept and an early example of how rap songs can act out as short plays, sketches, routines, farces, musicals or whatever you want to call it. There are even more famous instances of such rap acting on “Giant Single” (“Beat Bop” also partially falling into that category). It doesn’t get much better than Dana Dane’s “Nightmares,” where female guest parts, a sung refrain reflecting the theme and a Herman Munster-sized interpolation of the ‘Munsters’ theme complete the storytelling. The Masterdon Committee’s “Get Off My Tip!” is a domestic dispute turning into a rap battle and features a young lady by the name of Pebblee Poo (who used to emcee for no less than Kool Herc) lashing out hard at her no-good boyfriend, a talent she also displays on her answer record to the Boogie Boys’ “A Fly Girl,” “A Fly Guy.” While seemingly taking a clue from Roxanne ShantÃ©, Pebblee Poo actually fills the role of take-no-shit b-girl in a way ShantÃ© had yet to grow into. The female on Rap-O-Matic Ltd.’s “Lies, Lies” is more reminiscent of ShantÃ©, only that she’s part of a rap tag-team which the ladies of the Juice Crew (Rox, Dimples D, Glamorous) for some reason never were.

And then there’s the infamous “Drag Rap” by The Showboys, direct samples and interpolations of which would wind up with some delay on hundreds of bounce music records. Originally released in 1986, “Drag Rap” didn’t catch on in the burgeoning New York hip-hop scene. As a ‘play’ it might have been a touch too gimmicky. The staged showdown between two fictional Queens ganglords, Bugs Can Can and Triggerman, is underscored by the ‘Dragnet’ theme, and while the action is frequently violent, the narrative lacks suspense, ending with the arrest of the two criminals by a certain Eliot Ness, who arguably would fit better into a prohibition era setting. The commercial break with the Old Spice whistle doesn’t help either, so that “Drag Rap” didn’t have the immediate impact of certain records from Los Angeles that were as realistic as they were comical such as Toddy Tee’s “Batterram” or Ice-T’s “6 in the Mornin’.” ’90s New Orleans DJ’s and MC’s didn’t care much for the content, though, they were simply still infatuated with mid-’80s hip-hop, of which “Drag Rap” is an impressive specimen apart from being a highly interesting piece in the street rap puzzle.

But with all due respect to the other songs in the earlier Profile catalog, they remain in the shadow of Run-D.M.C.’s “Sucker MC’s (Krush-Groove 1),” whose combination of force and finesse heralded in nothing less than a new age (known as the new school). “Giant Single” shows how rappers find a myriad of ways to bedazzle the listener, but one day in 1983 Run, D.M.C. and Jam Master Jay came along, put their Adidas-clad feet down and sent shockwaves across the – still small – rap universe. Supported by the Profile All-Stars (including Jeckyll, Hyde and members of the Fresh 3 MC’s and the Disco Four), Profile in-house producer Pumpkin gets his due with “Here Comes That Beat!” (the first hip-hop joint dedicated to a producer?), and while he is remembered as a pioneer on the drum machine, the by far most memorable drum programming here is that of “Sucker MC’s.” DJ Cheese is hailed as King Kut by Word of Mouth (KMC and Ali-G), but with its drum machine overload and grating replaying of France’s national anthem, “King Kut” can’t measure up to the simple beauty of the track Cheese cuts up for one of his scratching showcases, Run-D.M.C.’s “Jam Master Jay” (not included).

CD 1 contains another landmark single of ’80s rap, Sweet Tee and Jazzy Joyce’s “It’s My Beat,” not only one of female rap’s finest moments but also one of the songs that ushered in the sampling heydays of the late ’80s. Think sampling is sampling no matter what? Compare “It’s My Beat” to Spyder-D’s unimaginative Nu Shooz adaptation “I Can’t Wait (To Rock the Mike)” from the same year and think again.

The chronicling of Profile’s strong run in the ’80s continues on CD 2. Run-D.M.C. took their brand of rock rap to another sphere when they collaborated with Aerosmith on “Walk This Way” and two years later surprised with the dense sound collage (and unspoken James Brown tribute) “Beats to the Rhyme” while Dana Dane stuck to storytelling with “Cinderfella Dana Dane.” Out of the blue, Rob Base & DJ E-Z Rock came up with a song that would become one of rap music’s most popular of all time, “It Takes Two.” Special Ed gave the label another hip-hop classic with “I Got it Made,” Twin Hype scored a club smash with “Do it to the Crowd,” while King Sun had his Profile signing still ahead of him when he recorded “Hey Love.”

CD 2 also documents the rise of the producer as an important figure in hip-hop with contributions from New Jersey’s Tony D (Too Kool Posse’s “Give ‘Em a Sample,” Poor Righteous Teachers’ “Rock Dis Funky Joint”) and California’s DJ Quik (“Born and Raised in Compton,” 2nd II None’s “Be True to Yourself”), who also ranks as one of the label’s most famous alumni. Famous in their own right, but certainly not for their short stint with Profile, are Onyx, whose playful “Ah, And We Do it Like This” (1990) will bring an incredulous look on the face of anyone who remembers them as the crazy baldheads (reinforced by one Sticky Fingaz) that burst on the scene three years later. Afrika Bambaataa released his most important work on Tommy Boy and years earlier, still “Zulu War Chant” (1993) was a slamming update on the old school’s call-and-response and breakbeat formula. Asher D & Daddy Freddy’s “Ragamuffin Hip-Hop” was merely licensed from UK label Music of Life and as a Profile release had virtually no impact in the US. A wiser choice would have been something from Profile’s own successful advance into the UK scene, Caveman’s “Positive Reaction.” Finally, the compilation omits notable forays into regional rap with Nemesis (Dallas), N2Deep (Vallejo), JCD and The Dawg Lb. (St. Louis) or Joint Ventures (Boston).

For years the big black PRO lettering over the red background on their 12-inches for me symbolized the professional philosophy that was at work at Profile Records. In 1995 the success story seemed to go on forever thanks to “Whutcha Want?” by Nine and “Broken Language” by Smoothe Da Hustler and Trigger Tha Gambler. In 1996, Camp Lo’s “Luchini AKA (This Is It)” announced another classic album before the label was abruptly sold and shut down in 1997 (“Uptown Saturday Night” would also be its final full-length). But, and that’s the argument “Giant Single” tries to make, Profile also wrote rap history with singles, more precisely maxi (or giant) singles that were spun by DJ’s around the world. Whether you were there or not, this anthology contains hours of essential listening.