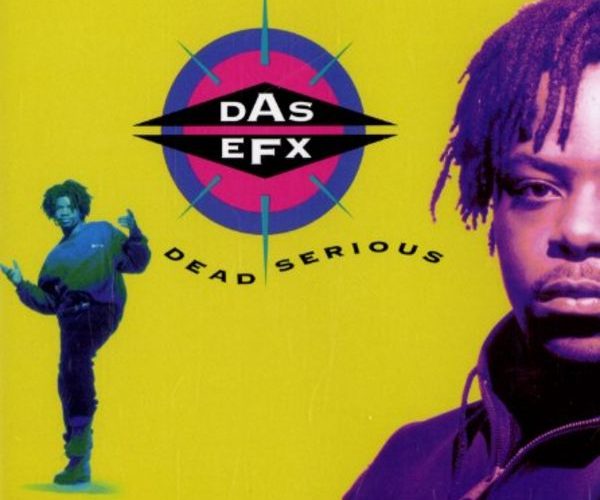 BUM-STIGGEDY-BUM-STIGGEDY-BUM HON! An unlikely candidate for one of the most ubiquitous phrases in pop culture, but in 1992 Das EFX took their unique lyrical stylings “Straight Out the Sewer” into the mainstream mindframe in a big way. The story of how they arrived in hip-hop was legendary even before they hit it big – theyLOST a talent competition for rap acts (coming in second place) but so impressed EPMD in the process that they were offered a recording contract on the spot. Anticipation grew as they recorded and toured with EPMD and their extended Hit Squad family. “Dead Serious” finally arrived in 1992 and quickly found a following OUTSIDE of rap’s hardcore fanbase thanks to a style which set Drayz and Skoob (Books in reverse) apart from everyone else. The Brooklynite dynamite duo used intentional word repetition, stuttering and the suffix “iggedy” or “iggity” in a spastic frenetic vocal delivery while simultaneously packing their lyrics with a previously unseen density of pop culture references.

In fact Das EFX’ first hit single “They Want EFX” has so many of them that it took years before I recognized them all. As impossible as it seems in 2008 the world wide web as we know it barely existed in 1992 so you couldn’t “Google it” to look up an old commercial or TV show and you sure as hell couldn’t watch it on YouTube – there wasn’t even a widely available graphical web browser until 1993. “More Parks sausages mom, please!” That seemed like complete nonsense to me and it should have since I didn’t grow up on the East coast and never heard any Parks Sausages Company ads on the radio. That was the mystery and magic of Das EFX though! Even what didn’t make sense seemed like a stream-of-conciousness rant that rhymed; a free-flowing tongue-twisting verbal romp through an endless pop culture playground. Thanks to samples from James Brown and Malcolm McLaren “They Want EFX” had a catchy beat to go with the spastic rap and the song quickly became a phenomenon.

“Well I’ll be darned, shiver me timbers yo, head for the hills!
I picked a weeping willow, and a daffodil
So back up bucko or I’ll pulverize McGruff
Cause, this little piggy gets, busy and stuff
Arrivederci, heavens to mercy, honky tonk I get swift
I caught a Snuffleupagus and smoked a boogaloo spliff
I got the nooks, the cranies, the nitty gritty 40 doe
So all aboard, castaway, hey where’s my boogaloo?
Oh-h-h-h-h-h-hhh I’m steamin, a-go-ny!
Why’s everybody always pickin on me?

They call me Puddin’ Tane, and rap’s my game
You ask me again and I’ll t-tell you the same
Since I’m the vocal vegemintarian, stick ’em up freeze so
More Parks sausages, mom, please?
A-Blitz shoots the breeze, twiddly-dee shoots his lip
Crazy Drayzie shot the sheriff yup, and I shot the gift
And that’s PRET-TY SNEA-KY SIS, oh yo
I got my socks off, my rocks off, my Nestle’s cup of cocoa
Holly Hobbie tried to slob me, tried to rob me silly stunt
Diggedy-dun dun dun dun dun, DUN DUN!”

All of the tracks on “Dead Serious” save for “They Want EFX” and “Klap Ya Handz” were produced by Chris Charity and Derek Lynch for Solid Scheme Productions. Their scheme was indeed solid as Das EFX quickly rocketed past gold on their way to platinum status off the strength of follow-up singles like “Mic Checka,” which also happens to be the album’s opening track. To this day I still have vivid memories of the music video, which LITERALLYemphasized the idea Skoob and Drayz were from the underground by having them rap in a sewer filled with alligators, broken glass and dirty rusting pipes (you can watch it here). The lyrics are dope throughout but the punchlines in the third verse left me open like a hooker on payday.

“OOOH-WEEEEEEE! Tiggedy-time to get buckwild
Call me Butterfingers cause I drippedy-drop umm, ’nuff styles
Iggedy-eeny-meeny-miney-moe
Shiggedy-bop-bap, I’ll snatch a rapper by the toe
Yo, I riggedy-write my pages when I figgedy-feel the flavor
I fliggedy-fly the friendly skies, so now I take a Sky, Pager
LePew! I figgedy-freaks the funker
The rough Nestle Cruncher, word to Arch’ Bunker
So gimme the mic and I’ll liggedy-light it up like Uncle Fester
Microphone checka, one two checka
Oh yessir! I tiggedy-take no shorts, I’m not the fella
I might can even act; Stella – who? Stella – who?
Yo Stella, here kiggedy-comes the bumrush, mayday!
No static, I niggedy-knows more kids than umm, Bebe
So higgedy-hey hey hey, not Dwayne but I got props
I biggedy-bust rhymes like Slick Rick busts shots
So when, I friggedy-freaks the funk, I’ll be the ill funk freaker
I stiggedy-stole an +Apple+ from this +Bum+ named +Bonita+
So riggedy-rub-a-dub I got the lip to make ya flip
Bustin heads with Erick Sermon and my nigga Parrish Smith”

Short but sweet, “Dead Serious” is ten tracks jam-packed with dopeness. “Jussummen” remains a personal favorite of mine thanks to the “Blind Alley” beat and the “La-Di-Da-Di” sample in the hook, but there’s no shortage of fresh material marrying unconventional combinations to funky and/or hilarious effect. “Dum Dums” combines “The Happy Song” by Otis Redding with Run-D.M.C.’s “Here We Go (Live at the Funhouse).” “Brooklyn to T-Neck” includes everything from “The Payback” by James Brown to “What’s the Word” by Chubb Rock. A lot of the beats on this album sound familiar and should given they’ve been sampled hundreds of times since, but in 1992 none of these loops had been completely played out and the tight way the tracks were stitched together means the songs still sound relevant today. I unsuccessfully tried to argue to my high school english teacher that the poetry of hip-hop was just as relevant as Henry Wadsworth Longfellow or E. E. Cummings, but when I showed her my hand-typed “They Want EFX” lyrics (perhaps one of the earliest lyrics I ever transcribed) she scoffed and dismissed it as being gibberish. While Das EFX may have had an unconventional rap style for the time (which was quickly imitated by lesser rappers coast to coast) it was certainly NOT gibberish. At a time when rap was beseiged by an A-to-B rap formula, Drayz and Skoob went straight past C all the way to Z and reinvented what hip-hop could be. Merging pop culture and punchlines, beat poet skat and hip-hop style, and creating a free form lyrical jazz in the process, Das EFX and “Dead Serious” were ahead of their time yet surprisingly accessible to a wide audience. For better and for worse their debut album remains the pinnacle of their rap career.