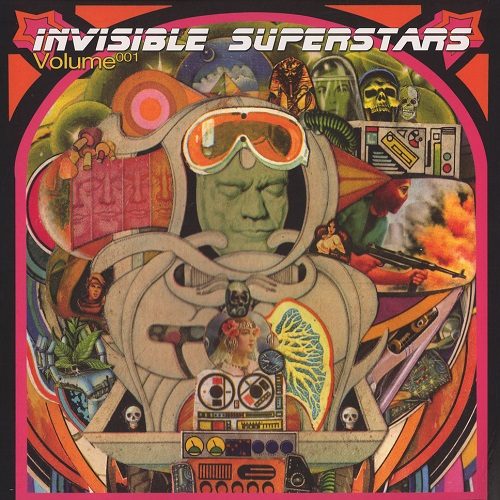 It’s not hard to be invisible – just ask Ralph Ellison. If you feel that you are outside the norm, apart from mainstream thought or deed, unwilling or unable to accept the status quo, you can be invisible too. Invisibility is when you go unnoticed either by accident or by design. For The Secret Life of Sound invisibility is definitely by design. The stated goal of this tiny imprint is to “provide a platform to release musical experiments.” Musical experiments do not make up the majority of what plays on the radio unless you have XM, and if you’ve ever seen Aceyalone on the cover of Rolling Stone then you’ve come from another Earth in the multiverse. The masses prefer a predictable understandable product, easily consumed and easily disposable. If it makes you think it must be wrong and therefore becomes invisible, and if you challenge conformity you become invisible too.

Covering “Invisible Superstars Vol. 001” will not bring The Secret Life of Sound into the visible spectrum. These modern musical artisans prefer their invisibility because it allows for unparalleled freedom. An invisible man is a liberated man – his actions will not be questioned. No matter how little or how much exposure this review offers, the eclectic group of musicians found on “Invisible Superstars Vol. 001” clearly relish the freedom that their invisibility offers. The journey they take listeners on is bizarre but not unpleasant. Miles Tilmann’s “Chicken Salad Beats” is not unlike what Kool Keith’s demented mind creates on his better days – electronic, synthetic and abstract yet driven by a familiar pattern of hip-hop beats and breakdowns. Scott Matelic’s “Thoughtless” floats like clouds in the sky on a warm summer day, as an unknown but powerful femme fatale sings out her soul to piano and drums. Tracks range from the down home funk of Controller 7’s “Consumer” to the mind-bending hyper-tempo and bass of Meatsock’s “Another Place.” No one track here predicts the next and yet a common thread weaves them all together – unfettered self-expression.

Many consumers would in a traditional hip-hop sense be left lost and confused by “Invisible Superstars Vol. 001.” Beats normally drive rhymes, rhymes drive hooks, and hooks drive songs. When listening to something like Mormon Freegan’s “seeing n=0” such formulas are thrown out the window. Turntablism fans might understand though, as the snippets of dialogue and dynamic rearrangement of the beat are akin to the works of artists from DJ QBert to DJ Shadow. Corsic’s “Romoxy” taps the main vein of sound manipulation and turns the guitars, pianos, saxophones and beats into a new form exceeding their origins. Flip it, reverse it, double it up, repeat it, bring it out and fade it in. If you’ve ever just sat and enjoyed an instrumental by Evidence or DJ Premier it’s not hard to understand this song’s appeal, or that of PNS’ “Storm,” or of many of the tracks on this largely digital release. Only Thomas Dimuzio’s “Tire Damage” left me flat (no pun intended) as I can grok his intent at sonic manipulation but really can’t call it a “song” no matter how much I stretch my imagination.

The world of an artist is often a study in contradiction. On the one hand, they are told that the purity of their work exists in being created simply for art’s sake, on the other hand, artists have starved to death creating art for its own sake only to have collectors auction their work for millions long after they’re gone. The Secret Life of Sound may in fact be trying to strike out for a happy medium between the two, something which collectives from Definitive Jux to Rawkus have all tried to do in hip-hop with varying degrees of success. “Invisible Superstars Vol. 001” at least offers the hope that while the artists within may regard their abstract art as too unconventional for the masses they’re willing to at least TRY to reach those masses. If we’re all lucky they’ll turn a profit and make more while simultaneously being able to stay as invisible as they want to keep their creative juices flowing.