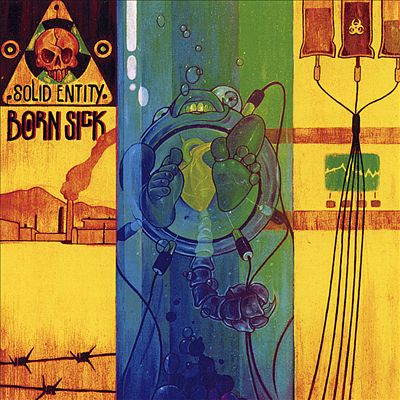 For every artist going platinum and working on a line of cognac, condoms, or energy drinks, there are thousands more grinding away, working in home studios, selling mixtapes by hand, and dreaming of the day when their passion can become their day job. Chanj (formerly Rekks) and Psychlone are an example of this â€“ two artists from parts East (PA, VA, and MD) who have been making music longer than Soulja Boy or Sean Kingston have been alive. “Born Sick” is their second CD as Solid Entity.

In his review of their debut, “Worth the Weight,” RapReviews writer OT Baez commented that the duo had decent rhymes but weak beats. As with their debut, Chanj produces the majority of tracks on the album, and he has stepped his game up. His tracks have a cold, electronic sound, like a less sample-intensive attempt at the dark East Coast sound, only on street rap equipment. He offers up some subdued keys on “Take It How You Want to Take It,” ominous synth whine on “Born Sick,” and sparse strings on “Takin’ Over.” He is also able to get funky at times, like on the farting bass of “Get It,” while Psychlone criticizes people clawing their way to the top:

“Since I’m all about gettin’ it I bet you’re gettin’ got
Forgot to jot a note to self I guess you’re gettin’ caught
Impressin’ ya boss with impressive thoughts ain’t worth shit
While I split into cliques who think they’re gettin’ fame
Obsessed with name droppin’ aggressively dame hoppin’
The rest of the same’s poppin’ to dress the resume
Gettin’ laid will surely combat the stress of everyday
But you really should do it the clever way
Never wait for handouts get your ass in the Chevrolet
Get goin’ and see the country in seven days
Look for opportunities, you’ll be met with praise
Get the most for your money learn to properly
Market yourself if you want to harvest the wealth
Target you health, get a physical tomorrow your self
Esteem’s a bit brighter so the darkness’ll melt”

Chanj also steps aside and lets some other producers take the boards on the rest of the album, and there are several fairly banging beats offered up. Heart Attack’s “Adrenaline” has a funky, sinister organ line; DJ Infinite’s “Cold Hearted People” has a nice hook built around a vocal sample, with snapping snares and piano to round out the beat; Johnny Cock and JL’s “Puttin’ Me On” chops up a melody and adds on some booming drums. As a whole, though, the beats are lacking bass and bottom, and end up sounding tinny as a result.

Kno’s “Fever Pitch” is one of the better beats on the album, continuing the theme of sinister, subdued funk and adding in chopped up vocals. Unfortunately, it’s marred by an uncalled for line by Phsychlone:

Nothing kills a track like bringing up rape, especially if the bars aren’t so hot to begin with. When they mind their subject matter, the duo are fairly nice on the mic, offering up some intricate wordplay and impressive breath control. It’s clear that they are committed to their craft, and they drop some great lines. They also share the mic with guest rappers Specs, Paul Pot and Rosko, all of whom threaten to outshine Psychlone and Chanj. The duo shine brightest on “I Don’t Follow U;” It’s meant to clown emcees who rap about gibberish, but it features the duo doing their best Kool Keith-meets-El-P. It also adds a dose of humor that is missing on the other tracks:

“Munchin’ on laser rip metallic plastic irrelevant
Pitch fits switchblades slingin’ armor for pelicans
Conquerin’ peaces and warfare
Where ya goin’ with this?
Demon cars and skyscrapers when I’m throwin’ fits
Crawlin’ vertical up the side of building invite the children
So now you think you’re a spider?
Convertible is quite appealin’
Battle forethoughts in the background when hyper chillin’
Some type of liposuction and I don’t fight the feelin”

“Born Sick” is a DIY affair done by true amateurs, meaning people who do what they do not to draw a paycheck, but because they love it. It suffers from the usual pitfalls of DIY hip hop â€“ tinny beats, some less-than-brilliant rhymes– but at seven bucks from CD Baby, it’s at least worth a listen.