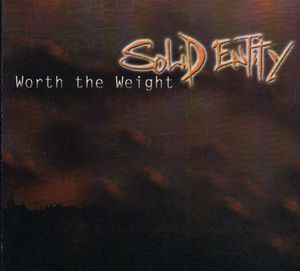 Solid Entity :: Worth the Weight

If you didn’t know any damn better, you’d think Solid Entity’s LP was copped down the street at Sam Goody. The CD art looks nice, and it even came shrink wrapped. Upon first impression, I was surprised to not see shit like a handwritten track list, a Xeroxed cover, and my face reflecting off a 74-minute Maxwell CD-R, what I’d come to expect from so-called “underground” and “indie” artists. Turns out Psychlone and Rekks have been putting it down together for a decade, and since the both of them are damn near 30, they’ve been itching to drop their debut to show us it’s “Worth the Weight.”

Among the perks of being signed to an independent label, (besides avoiding some of the greed and eventual pimping that happens with every other label) is the much desired creative control. Solid Entity sure had that throughout this album, as Rekks produced the entire thing. First of all, there aren’t many hooks on this album, or not what you would call a traditional hook. Most choruses throughout the 12 track LP, if present at all, are samples of popular artists spitting a line or two (most enjoyably, Big Pun’s “Insanity’s building a pavilion in my civilian” on “Insanity”). This might cause some LP’s to drag on but it works here as Rekks and Psychlone’s styles mesh together well enough to not need a break between verses.

Unfortunately, Rekks is a little better on the mic than the boards, as he serves up about 11 uninspiring beats. The introductory track “Door to Darkness” could not have been placed in a worse slot, as it’s lifeless beat kills the entire song before it even started. The title track, “Worth the Weight” sounds like a wack ass attempt to achieve a DJ Premier sound. The beat changes halfway through, but only for a brief 11 seconds, before we are back to that shit that sounds what it would sound like if Premo was fucked up, had his hands tied behind his back and decided to throw a lil’ something together. The only exception is the gloomy organ and faint hi-hats on “Introspection,” by far the album’s jewel. Rekks doesn’t let this opportunity go to waste, as he gives you the chance to take a glimpse inside his life:

“I glide over instrumentals like I slide on ice
When I’m pondering tragedy it seems I skid by life
Damaging personality, now tell me that’s logical
Finally realizing if I try, I’m unstoppable
Was told by a close friend not to focus on obstacles
Next I said I’d go to conquer mission impossible
Adventures and visions of future worlds when I’m dreamin’
Crip the reigns and nightmares
Sheets sticky I wake up screamin’
The champion refusing infection by injection
I’m neighboring demons and devils discovered by introspection”

Psychlone doesn’t get left far behind as a verses giving props to Hip Hop are ALWAYS welcome:

“Messin with the only form of music that’s soothin’
Hip Hop until the death, I’ll stop if my last breath is proven
Axe the rest and put ’em in a tomb
I’m sick of guitar licks, it shoulda been the boom

Too many Saturday Nights alone at home
Writing and deliverin’ my dome in a zone
Let me try and sum it up, Run and DMC got me through some hard times
I “Follow the Leader” in front of me
1, 2, 3, and I was playin for ’em, 5, 6
At the time Kool G Rap was the man makin’ live shit”

While both Rekks and Psychlone aren’t mic gods, their battle rhymes and often intelligent lyrics aren’t too shabby. Both of their deliveries show their age a bit would probably sound a little better suited over some old school break beats, instead of trying to mess with over-used concepts like the I’ma kill you shit on “Carpool Tunnel Syndrome,” or the off-the-wall antics of Psychlone’s solo “Armed to the Teeth” (with samples of RZA’s unforgettable line from “Diary of a Madman” – “so I chewed my fuckin arm off, and made an escape!”) where Psychlone relays a story about eating a crazy guy’s arm.

“Worth the Weight” is a decent debut, capable of being much more. Maybe they got the whole sophomore slum thing in reverse. What’s certain is that both Rekks and Psychlone are armed with mic skills and with a little more guidance, different concepts, and a revamp of their production, Solid Entity could really show that they are “Worth the Weight”.