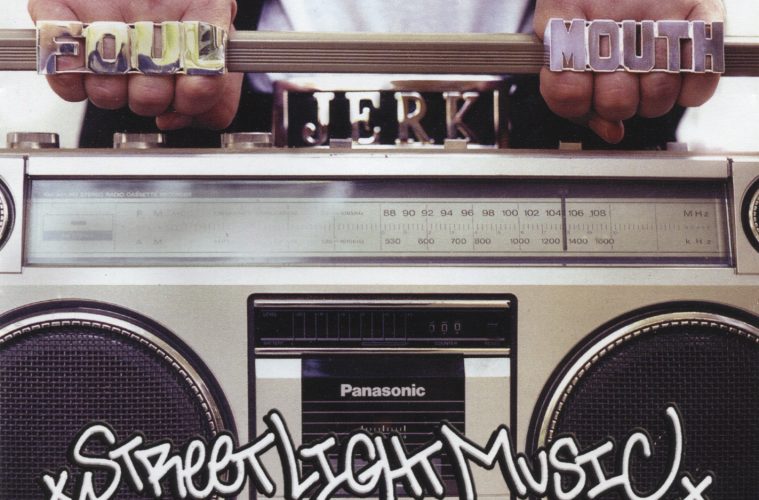 If you’re like me, one of the first things you check out when inspecting a new rap CD is the list of guest rappers on the back. By this criteria alone, Foul Mouth Jerk should catch your attention with “Streetlight Music,” as it boasts guest appearances by an incredible array of respected artists, from Masta Ace and El Da Sensei to Murs and Grandmaster Caz. Seriously â€“ Grandmaster Caz. When’s the last time you saw him on someone’s album?

Being relatively unfamiliar with Foul Mouth Jerk’s catalog of work, I must admit I was shocked at the caliber of guests he lined up here. (Really? Grandmaster Caz??) Clearly I was the only one surprised, though, since, four albums deep, FMJ got the MC community to take notice and participate in his paean to the old school. As the title suggests, this one is a throwback to the days of hijacking streetlight power for neighborhood jams around early DJs’ formidable sound systems, and the music and lyrics both reflect the old school focus.

The opener “Streetlight Music” sets the tone for the rest of the album, with a beat full of dusty drums, electronic sound effects, and a familiar organ sample set off with scratches by DJ Notik. FMJ’s raps initially sound like an afterthought to the music but eventually take center stage as he name checks the original greats and puts the (relative) newbies in their place.

“Way before rap had a Grammy award
There was a time when hip hop wasn’t carried in stores
It was not just a product you could go out and buy
It was the people and the party and the place, the time
Top 40 groups should have to pay dues
To cats like Spy, Herc, and Phase Two
For pavin the way for the rest to break through
Cuz them wildstyle techs y’all flexin ain’t new
Pioneers like Melle Mel and Grandmaster Caz
shoulda gotten paid and had the cash
Like Dr. Dre and Aftermath
And every other artist with the platinum plaques”

Brycon â€“ who, along with Waxwerkz, produces most of the album â€“ contributes the album’s freshest track for “Small Town USA,” on which Masta Ace stops by to pay tribute to the podunk towns that always show love on the road. Another standout is “One Room Shack,” with its beat of melodic xylophones and clanky keys courtesy of A-List, who also provides the hook’s scratches of the obvious “Juicy” sample, “Thinkin back on my one room shack.” Brycon’s “Neighborhood Drug Dealer” features a similar vibe with another recognizable vocal sample, this time from KRS-One’s “Love’s Gonna Get’cha.”

The tracks that stand out the most are those that depart significantly from the old school mood, for better or worse. While the molasses slow weed ode “Mr. Green” is decent enough, it doesn’t quite match the feel of the rest of the album. On the other hand, a pair of political commentary songs near the middle fit better musically despite their unique subject matter. “The Decider” is an instrumental track by Waxwerkz that lets our president present himself in all his glory. It’s littered with the Bushisms we have come to know and love, including winners such as, “Families is where our nation finds hope, where wings take dream.” This is followed by the electric guitar laced “Culture of Life (Jesus Doesn’t Give A Shit),” which finds Foul Mouth Jerk taking the US to task for its many political conflicts of interest and the human fallout that results.

“Is anybody even payin attention
to the basic direction this nation is headin?
The multinationals have seized control
The presidential cabinet is full of CEOs
Gives a whole new meaning to ‘executive branch’
And Bush makes sure that their agenda’s advanced
While the companies they run are overseas profiteering
Under the code name Operation Iraqi Freedom
Both sides suffer combat casualties
While Exxon sets record profits on gasoline
The whole administration says, ‘Support the troops’
Then cut combat pay, now that’s a poor excuse
When the coffins come home, they won’t let you see
So you wear a yellow ribbon on your SUV
But let your loved one catch a slug, set a Mass
‘God and country’ ain’t nothin but a hollow epitaph”

And that’s just the first verse. He goes on to rail against “big business dressed up to look Christian,” and notes of the war effort, “Everyone that perishes creates more terrorists.” You might not agree with every last statement, but after eight years of the Bush administration you’d be hard pressed not to at least sympathize with the sentiment.

There are a number of other high points too, including a guest appearance by Breez Evahflowin on “Lost in the Sauce” and a jazzy interpolation of the newly revived Beatles classic “While My Guitar Gently Weeps” on “Played Out.” It’s different enough from both the original and Wu-Tang versions to merit re-use, and it’s subtly done, so that you may have a hard time picking out the melody on first listen.

Foul Mouth Jerk achieves a remarkable consistency of tone throughout “Streetlight Music,” which is not always a good thing. While the beats are individually enjoyable, they tend to all blend together by the time you get to track 16. Additionally, he rarely switches up his flow, which is just competent rather than really great, and he doesn’t have the most commanding voice you’ve ever heard either.

Everything on this album is on the verge of being truly exceptional. The beats are very good but lack that extra punch. FMJ’s rhymes are well-crafted and meaningful, but his delivery and flow leave a bit to be desired. The guests are superb and provide a welcome change of pace, but they can’t mask the feel of sameness that creeps in as the album wears on. Regardless, this is a high quality album that is worthy of its amazing line-up of guest MCs, and it deserves more recognition than it will probably get. If you’re already a Foul Mouth Jerk fan, you won’t be disappointed with “Streetlight Music,” and if you aren’t, this is a great place to start.