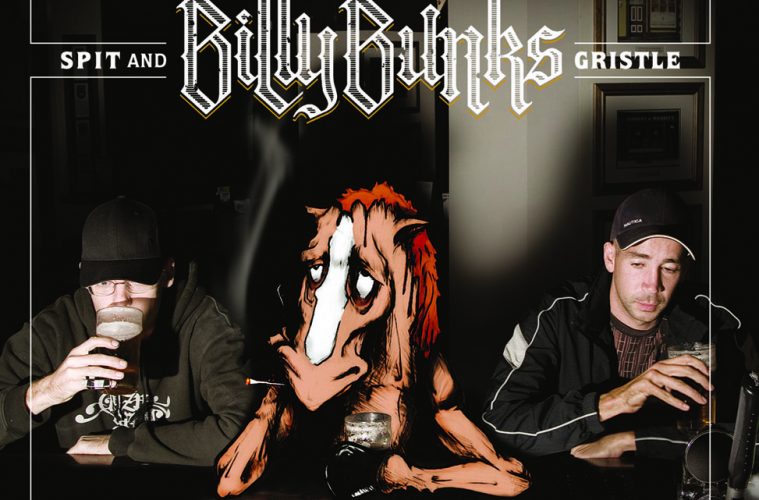 With monikers such as the “Booze Bastard” and “Hired Goon” you know you’re in for a treat. Apparently, the Australians like their liquor as emcee Billy Bunks follows this trend. Melbourne, Australia’s Billy Bunks debuts his solo album “Spit and Gristle” with production from Nick 1 as it is unveiled all across the world. Known for his uncanny, humorous, and clear-cut lyricism, Billy Bunks has already made a name for himself locally and now attempts to have his music internationally appreciated. Maintaining his dedication to uncharacteristic hip hop music, his music speaks for itself as it doesn’t get more real than this. With his own image of what hip hop should be, Billy Bunks defines his own distinctive form of hip hop in his debut of “Spit and Gristle.”

When it comes down to it, Billy Bunks is one of those emcees who distance themselves far from the norms of mainstream hip hop and rarely entertains the idea of being so “politically correct.” Perhaps the Australians have more of a sense of humor than the Americans in regards to the rap industry, but one thing is for sure-Billy Bunks will tell it like it is. He doesn’t shy away from tracks such as his debut single, “Devil’s Clay,” in which the song has an underlying meaning of literally throwing poop in someone’s face from a rooftop or the more subtle, understated metaphor of not tolerating other people’s bullying and criticism. Yes, you heard me right-pooping, shitting, whatever you want to call it, this is what he raps about. I even had the opportunity to catch the video for the track and let’s just say that if you’re disgusted by the subject at hand, you’d better skip out on this one. Although Billy Bunk’s dark and somewhat twisted style of rap is rather unique, he keeps it real from beginning to end. He praises himself for being unlike other rappers in the Australian hip hop arena who are programmed to construct tracks that sound like the conventional and predictable “rap song.”

Billy Bunks maintains his rare matchlessness when speaking about women. With its classic sounds of violins and an added modern bass, “Strumpets” lays it down about women through the eyes of Billy Bunks. As I have learned from reviewing music from different countries, slang varies from one place to the other as it makes it quite difficult to comprehend at times especially when 14th century Middle English terms are used. With this in mind, I have to be honest and say that I had no idea what a “strumpet” was except in context, but now I have come to the understanding that it is simply what we Americans know as a “whore.” Billy Bunks begins an introduction to the track as he dedicates the song to all the “princesses” as “some of the names have been changed to protect the filthy.” In a somewhat comical fashion, he ridicules females who are unintelligent and dim-witted, but praises the young ones as he says, “I met a girl named Christine, a barely legal teen.” He then gets the response with “yeah Bunks you better f**k with her.”

In another attempt to defame women, Billy Bunks reminisces about a one night stand in “Take the Bus.” Although deceiving with its lighthearted piano background, “Take the Bus” is a one and a half minute story about Billy Bunks frowning upon a female who he so despises. Disappointed and disgusted by the situation, he goes as far as to tell the female to “take the bus” because he no longer wants her in sight as he says:

“Don’t make a fuss
Just take the bus
What you talking about
There ain’t no us
There never was, there never will be ever
Don’t let it get you down
Keep your filthy head up”

Although his antics and lyricism remain raw and at times somewhat direct, Billy Bunks confirms his ability to remain genuine through his rhymes. “Tell the Kids” is a poignant effort from Billy Bunks to help society comprehend the issues facing today’s youth. With echoing sounds, chimes, and hypnotic melody, “Tell the Kids” exposes the reality of a fallen era amongst adolescents. His depiction of a harsh society filled with violence, drugs, and ignorance is an unfortunate certainty that he makes apparent through his commanding lyricism. As he visualizes the youth “deep with fiends,” it only becomes more and more apparent that change needs to happen in order to restore some type of tranquility.

“Spit and Gristle” is one of those albums that make you unsure whether or not you’re supposed to laugh or be offended. At first glance, it is an album full of offense and exploitation, but when delving more into Billy Bunks’ lyricism, you grow to have an appreciation for his rhymes and intelligence. His unmatched hilarity and absurdity is not for the faint of heart, but with that in mind, Billy Bunks is still able to show an unfeigned side to his otherwise seemingly heartless image. Far from the conventional, mainstream hip hop, Billy Bunks is placed in his own genre of non-conforming music to outshine many in the U.S. and Australian scene.