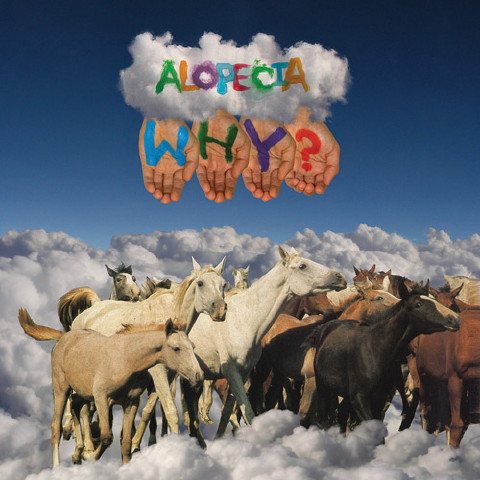 There was a day and time when Bottle of Humans” and Sage Francis’ “Personal Journals” represented the unlimited potential of hip-hop expression in simultaneously challenging and rewarding ways. You couldn’t just put on one of these rap albums for background noise, because the beats and particularly the rhymes engaged you in a journey through the mind of the artist-creator. Song meaning was multi-faceted and open to a broad range of interpretation, and the lyrical flows used by the artists were anything but conventionally A to B, one line perfectly matching the next.

It’s odd as I look back now how I and everyone else writing about those albums on RR capitalized the A in anticon. Their website makes it clear that it’s supposed to be lowercased, but either we all misinterpreted something or the definition changed over the years. After listening to Why?’s “Alopecia” I’m willing to bet that it’s the latter. Jonathan ‘Yoni’ Wolf definitely had his roots in hip-hop, collaborating from the start with Doseone when the two met while Wolf was at the University of Cincinnatti in 1997, using a variety of different group names for their non-traditional hip-hop. It wasn’t long before an anticon collective sprung up which called Oakland, California its home and can consider Wolf, his brother Josiah and Doug McDiarmid as founding members. Collectively this triumverate became the group Why?, seeming to imply the unspoken “WHY NOT!” as though both were a question and answer about the group’s artistry.

As the anticon collective eschewed conventional forms a continual debate raged on internet hotspots as to whether they could be called hip-hop or not, something even members of the collective seemed to be in strong disagreement about. If you take the Wikipedia entry at face value, the debate was finally settled as Wolf and others moved further and further away from anything remotely recognizable as rap, preferring to be thought of now as electronica and rock artists. I suspect “Alopecia” may be the last thing related to anticon to ever bear a capital A, because whatever you may have thought of Wolf back in the day he’s no rap artist now. A press release from the label tries to gloss over this fact, saying in part that Wolf is “inspired as much by MF DOOM and Lil Wayne as J. Newsom and Big Dylan. I’m struggling to hear it. “These Few Presidents” seems more Weird Al Yankovic and James Blunt than Method Man and a big Phillie blunt. “Even though I haven’t seen you in years, yours is a funeral I’d fly to from anywhere… I thought I had a pebble in my sock, I pulled it off and shook out a wasp, it stumbled off lost” croons the anti-rap happy pap tune.

I’m lost too. Even the most abstract Gnarls Barkley song seems more rooted in hip-hop tradition than this. Maybe that’s just because Cee-Lo and Danger Mouse are better writers and artists, but it’s got to be more than that. “Song of the Sad Assassin” has a piano melody and bassline that are borderline to banging, until about 90 seconds in when the song suddenly takes a left turn into musical masturbation that seems like a 1960’s folk song hippie acid trip. I don’t really give a rat’s ass about someone stuffing quarters into a laundry machine in a basement on Fairmont Street. I’m suddenly left pining for even the most vapidly materialistic and banal hip-hop imaginable, even something as dumb as Soulja Boy, provided it has a strong beat and recognizable rap song structure. Some of the song titles mislead the casual observer into expecting an injection of attitude. “The Fall of Mr. Fifths” is about as close as you’ll get though. Once in a while something rap-like breaks through the ill-advised singing on a track like “By Torpedo or Crohn’s” but there’s nothing profound about “today after lunch, I got sick and blew chunks, all over my new shoes.” You can hardly imagine that Sage Francis used to roll with these cats. Francis makes you take stock of the world around you, daring you to challenge the economic, social and political structures that shape and control your life. Wolf and his kin seem content to merely drift through it, penning songs for the bored and stoned that are about as thought-provoking at staring clothes tumble in a laundromat for hours on end.

I’m going to admit right here and now that “Alopecia” is just not for me. They do make an effort here and there to reach out to me pseudo rap-like songs “Good Friday,” but that’s about as much hip-hop as Crazy Town’s “Butterfly.” Now that I think about it that’s wrong – Crazy Town would be more easily recognizable as hip-hop than these dudes. Believe it or not though I’m not trying to knock Wolf at all if he and/or most of the anticon crew aren’t really into hip-hop now. I’m sure that some people stayed with them as they shed their underground rap aesthetic and went pop, but it seems that I got off the bus a long time ago and it’s too late to get back on now. This album is not poorly produced, but I can’t help but wonder how Wolf got to the point he’s at today, so far astray from the hip-hop he and anticon used to love. For me personally their sound isn’t progressive any more – it’s regressive. If I were them I wouldn’t capitalize the A either.