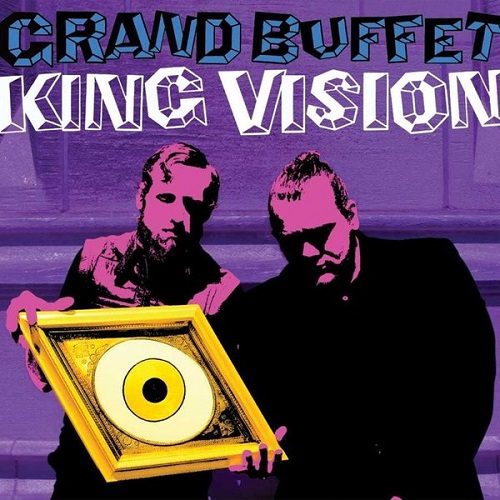 Music critic Kelefa Sanneh noted recently that every generation gets the rap/rock hybrid they deserve. If that’s true, then Grand Buffet’s mashup of backpack rap and skinny jeans-wearing electro punk makes perfect sense. The Pittsburg duo, comprised of Jarrod Weeks and Jackson O’Connell-Barlow, have been creating their unique take on hip hop since the mid-nineties. Weeks, often known as Lord Grunge, handles production and singing, while Connell-Barlow, aka Grape-A-Don, handles the mic. They have released slew of EPs, singles collections, and albums over the past twelve years, and “King Vision” is their latest release.

The album starts off with “Born in the USA,” which has an electro-pop beat reminiscent of Depeche Mode’s “Just Can’t Get Enough.” More striking is the fact that the track features Lord Grunge singing, without a single bar being spit. Grunge has a gruff, melodic voices similar to Blake Schwarzenbach of emo-punk legends Jawbreaker. There is a beat, and there is some scratching, but it is essentially an electro-punk song. The same is true of “Overcoming,” which starts off with Grunge singing:

“Self-claimed celibate zealots compelled
To sell us salvation from hell
Countless historical tales and UFOs
The sun moon and earth
They show prove and grow
Who’s holding back concealing ancient facts
Locked in vaults and sealed in candle wax
Throwbacks, the Cro-Magnons of now
They fear the unknown and lack the know-how”

Grape-A-Don’s rapping is competent, but heavily steeped in hipster irony. Lyrically, “King Vision” is a mix of the claustrophobic, paranoid sci-fi of Deltron 3000 mixed with the heroin-induced hallucinations of William Burroughs’ “Naked Lunch,” complete with references to centipedes. It’s on songs like “Casting Shadows” that Grand Buffet are at their best. The song is a two-minute blast of electro-pop punk, with the duo singing sinister lyrics over a sweet melody, which is further corrupted by layers of electronic distortion. It’s catchy but disturbing, and is pure pop perfection.

Sometimes they get too out there for their own good, like on the annoying “Drones,” and the proggy and cheesy “The Coolest Dog.” “Seek To Know” is their most hip-hop moment, with Grape-A-Don dropping lines over some 80s synths. “Death Paver” and “Heavy Targets” are slacker indie rock, and sound like “Odelay” era Beck.

After listening to all of “King Vision,” I hesitate to label it hip hop. As rappers go, Grape-A-Don is merely adequate, and their beats have zero in common with the funk breaks and boom-bap I associate with hip hop. Still, it’s an interesting album, and they manage to mix hip hop with electronica and indie rock in a way that doesn’t seem forced or gimmicky. Whatever type of music you want to label them, Grand Buffet manage to reinterpret the sound and paranoia of the 1980s for the 2000s, and the result is fairly banging.