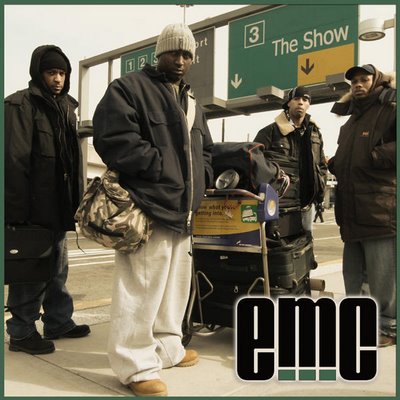 No one in the game ties albums together quite like Masta Ace. From “Slaughtahouse” all the way through “A Long Hot Summer,” he consistently weaves in skits with entertaining narratives that actually relate to the song content and complete a greater story arc. Never mind the fact that he makes amazing music along the way.

eMC’s “The Show” sees Ace trying out the hip hop supergroup gig with fellow MCs Stricklin, Punchline, and Wordsworth, all familiar collaborators from his last two albums. The “Four Brothers” embarked on this group project after touring together in 2001 and seeing the fans’ desire for such a union. The result is an album that succeeds in virtually every category, from production and lyrics to skits and concepts.

The music on “The Show” is handled by a solid collection of producers, including Ayatollah, Nicolay, Marco Polo, and Koolade, and they succeed in creating a smooth vibe that lasts the whole album. From the laidback keys and subtle sound layers of the opener “Who We Be” to the smoothed out soul feel of closer “Feel It,” the beats create a fluid mood that feels as effortless as the MCs’ intricate wordplay. In fact, the tone of the album is so consistently mellow in a stereotypically underground kind of way that the tracks that bang the hardest stand out among the crowd. Nicolay’s pounding drums and syncopated horns switch up the mood nicely on “eMC (What It Stand For),” as the crew offers possible interpretations of their group name. “The Grudge” is another heavier track by Ayatollah that boasts a catchy electric guitar riff that propels the MCs’ stories of jerks from their past that still draw their ire. Wordsworth’s tale of his scumbag uncle sounds like all too many losers in your family tree:

Wordsworth shines throughout and makes his case for Most Underrated on every track, and Ace does his thing as always. Stricklin is impressive as well, especially for the energy he brings to songs and the way he attacks the beat. Punchline comes across as the weakest MC of the group, but he manages to drop some of the album’s most memorable lines. At one point, he boasts, “We make the crowd say â€˜ho’ like Don Imus,” and he sums up the group’s lyrical mission best on “eMC (What It Stand For)”: “eMC â€“ Eccentric Music Celebrities / Murder the track, pour beer in its memory.”

It’s rare to find an album as heavy on concepts as “The Show.” It’s equally rare to find one with worthwhile skits, but the two go hand in hand here, as the album follows the four MCs on a tour stop as they get stranded at the airport and eventually make their way to the show of the album’s title. The story is structured in much the same way as Masta Ace’s last two albums, and it features some pretty funny highlights along the way (check out “The Angry Merch Guy” for some laughs you can relate to if you’ve ever been to this kind of concert). The songs themselves are also concept laden in a refreshingly non-formulaic way. The generic braggodocious “I’m the greatest” tracks are a rarity here. Instead, the group tries out new topics on songs like “We Alright,” with the MCs repeatedly answering the question “what it feel like” as they vividly describe situations of adversity and triumph. They tackle relationships with a level of nuance rarely seen on “Don’t Give Up On Us,” and Wordsworth even waxes nostalgic as an old man looking back on this time of his life on “Winds of Change.” A couple of choruses turn out a little schmaltzy, but other than that these concept tracks play out beautifully.

The diversity of topics is indicative of the care given to crafting each song, which is fortunate since the album clocks in at 24 tracks (including skits). While it may be a little on the long side, the quality never lets up and you’d have a hard time deciding which tracks, if any, should have been left on the cutting room floor. Masta Ace is one of those artists whose work you can safely buy on name recognition alone, and his team effort with eMC is no exception. This one is more than a mere holdover until his next solo effort.