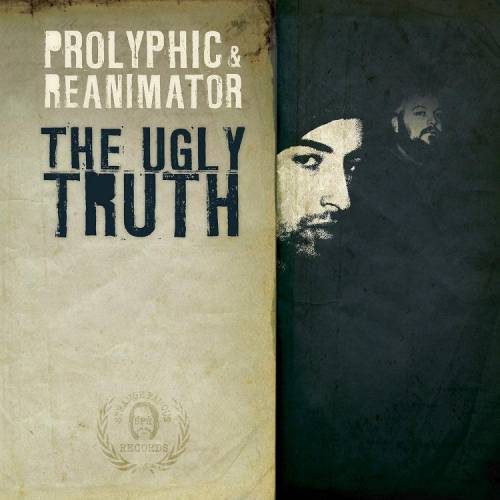 There are few better endorsements of your future potential as indie rap icons than to have your group’s line-up be handpicked by Sage Francis. To put it in perspective imagine being handpicked by LeBron James as his partner for a two-on-two game of streetball with a $10,000 cash prize. Sure that amount of money might be a drop in the bucket to James, but that’s not what matters. His opponents would look at you with a level of awe, thinking James just recognized you as an equal worth putting his money on the line for. When you go hard in the paint they’re going to expect some next level shit – anything less would be a disappointment!

If you’re going to the league’s leading scorer in independent hip-hop, a man with the credibility to make other people stars just by choosing them to follow his lead, Sage Francis is just such a man – and Prolyphic & Reanimator are his team. The latter was plucked by Francis from the cutting edge Chicago musical scene, while Prolyphic hails from Francis’ hometown of Providence. Signing the duo to his own Strange Famous Records is an even larger endorsement of what Francis’ thinks of their potential. Now Francis is betting with his OWN money on their ability to win in the game!

That’s a lot of pressure for two artists who were previously little known to deal with when making their big national debut, even with three years of lead time to prep an album. Nevertheless the dynamic duo seem up to the task on “The Ugly Truth,” an album that closely follows Francis’ lead when it comes to complicated and introspective lyrics meeting with ruggedly original beats. It doesn’t take more than one track to see their potential revealed and that’s the album’s opener “Broken Bottles.” Reanimator’s track has an distant and dusted quality, layering distorted voices and echoing guitars with a minimal beat that effectively proves less is more. Once Prolyphic’s voice comes over the sonic landscape, you’re immediately drawn into his words:

“I procede on a road that leads and bleeds
Over both cheeks that I turned and learned to beat
the shadows that I turned my back on, and walk away from
Boxing after dark with living daylights, we punch
Time clocks in a pine box
Cats thinking with an hourglass and hand in quicksand I’m just sinkin
Drinkin hand fills with this, dry spell oasis and
pinball machines became my wishing well replacement”

Even the fabled lost city of Atlantis must feel its depth challenged by those words. Of-course that kind of diving is off-putting to some, which is why Sage Francis is an INDIE icon and not necessarily a household name. Clearly Prolyphic & Reanimator are comfortable with being cast in that mold. From start to finish “The Ugly Truth” echoes the kind of rap aesthetic sometimes derisively called white-hop backpacker nerd rap; see also Brother Ali, El-P, Alias, and Non-Phixion among others. Haters come in all colors, shapes and sizes though, and it’s easy to dismiss and diss things that seem abstract and complex.

Thankfully “The Ugly Truth” is accessible even at a subconcious level thanks to Reanimator’s beats. The sonic landscape is dark and dirty, bouncing off the walls of your inner mind’s eye in beautifully gothic ways. Take “On the Side” for example – Prolyphic may hate “when crowds are easily impressed by double time” but I’m easily impressed by how Re shifts up a song straight out of James Bond into some pianos that pound so hard your trunk will rattle. “The Way I See It” lopes along at a comfortable pace at the start, the melody soothing your soul even as Prolyphic uses the track to paint a stark difference in his philosophy versus the world’s. Just past the 90 second mark the song crashes you into hard reality as the beat gets heavy and Prolyphic proudly proclaims “Never would I think something that I love would have a price tag!” Not every song is a sleight of hand though – “Dick and Jane” is whimsical from start to finish, “Playing With Old Flames” is a jazzy journey through Prolyphic’s love lost lament, and if “Box Within a Box” can be said to morph it’s only to take the original theme and repackage it HARDER.

So much potential is displayed on “The Ugly Truth” that it’s almost unfair to review this album after a few listens. Thankfully I have an incentive to buy this album and listen to it again given that the promotional copy I received has intentional drops which occasionally obscure the beats and rhymes to discourage bootlegging. It’s a strong debut for the new duo but it’s not a perfect one. Even Francis has recognized that you need the occasional song which can reach out to a broader audience, whereas nothing on “The Ugly Truth” seems like a potential radio single. I’d also like Reanimator to be a little more careful about mixing vocals so Prolyphic’s flows come through more clearly. Some albums are easily digested and quickly forgotten, but Sage Francis releases never fall into that category and it doesn’t seem that his proteges Prolyphic & Reanimator will either.