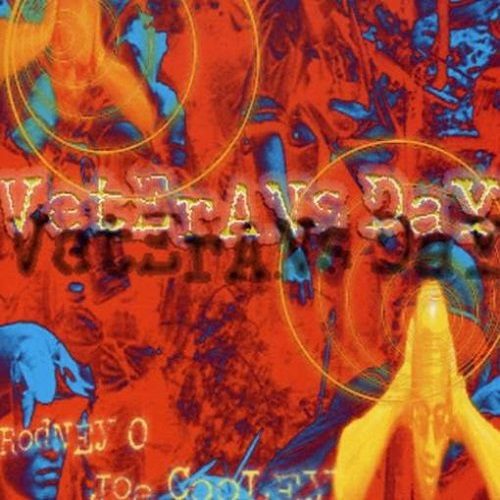 Bearing album cover artwork more akin to Jackson Pollock than hip-hop, I almost completely overlooked the fact a copy of Rodney O & Joe Cooley’s obscure CD “Veterans Day” was staring at me in the bargain bin. The phrase “almost completely overlooked” could apply in equal measure to their career, despite the fact they are seminal pioneers in the genres of bass booty shake AND gangster rap. In fact if you even know their name at all it’s likely you are familiar with their smash hit “Everlasting Bass,” a song with a signature sound paying homage to the old school while at the same time modernizing it with a thumping beat for the streets. Rodney O lyrics like “The bass that’s in your face, sho’ nuff shrugs your face/just like you got sprayed by a can of mace” and “you dumb shrimp wimps, it’s you I tame” may have been a tad… SIMPLISTIC, but it hardly mattered given how infectious their groove was.

Unfortunately for this duo a strong hit in 1988 that has since been widely imitated and duplicated did not result in widespread mainstream fame. I followed their career for a few years through the release of 1991’s “Get Ready to Roll” until they commited an act of career suicide in ’92 with an album unpolitely titled “Fuck New York.” It’s not as if I didn’t understand the sentiment given the ever-growing rivalry between East and West coast, but as a Midwesterner I had no stake in either side of the debate. They may have felt it necessary to personally answer back Tim Dog’s “Fuck Compton,” but Dog’s gruff voice and absurdly over-the-top disses added a level of whimsy to his hardcore beats, while R.O. and J.C. came off as whiny and petty. They even took a shot at “O.P.P.” for no good reason – Naughty By Nature are from NEW JERZ’, not New York. Besides who could hate “O.P.P.” anyway? Seriously. That’s just a fun party song. It’s not anti-ANYTHING, least of all the West coast. All they did was achieve the exact same thing Tim Dog had already done – lifelong career isolation.

It’s not terribly surprising that over the next eight years they only released four albums, getting steadily smaller distribution on steady smaller imprints. I can’t find any trace of Kritical Records other than this CD and the R.O. and J.C. website they mention in the liner notes no longer exists – even the Wayback Machine has zero hits. In fact in the penultimate achievement of obscurity, the domain was so worthless no cyber-squatter took it when the record label let it expire. You could actually go to Register or GoDaddy and claim “rodneyoandjoecooley.com” for your own although I don’t think the resale value would be that high given they haven’t put out a new record in over eight years. Nevertheless you’re not here for a debate on cyber-squatting ethics, nor is that what I bought “‘Veterans Day” for. This obscurity of this album and the cheap price it sold for were an undeniably irresistable combination. I had to know what the last dying gasp of Rodney O & Joe Cooley sounded like before they sank beneath the ocean of musical notability. It’s fitting to discover this album has a track called “Everlasting Bass 2000,” trying one last time to cash in on a movement they started over a dozen years before.

“Back to doin big thangs, everytime the phone rang
Break me off my proper change, just because my song bang
Rodney O back with the bass again, Joe let it spin then it all begins
All I wanna see is baby shake her skirt, took time off now back to work
It ain’t no question when it come to rockin I get papes so
Gotta keep them dollars comin to my pocket, stay unfadeable”

The song rocks the same bells as the original and has a musically similar chorus, but the duo have attempted to stay contemporary by speeding up their flows to a Bone Thugs type cadence. The bass has been changed up but still has elements which are throwbacks to their original hit. On the whole it’s actually not a bad idea, revamping their own hit for a new generation, but it still lacks the almost cornball charm of the original. The self-produced and recorded album (intentionally funny or not the liner notes read “RECORDED AT MY SPOT”) has more than a few satisfying hits of bass. “Well If Ah” compares favorably to a Warren G track, “1999 Dead and Gone” could be a Sir Jinx beat, and “All Night Long” has a whining note and slick funk groove you could mistake for DJ Quik. Even if they are just imitating the sounds of their fellow West coast contemporaries, it’s fair to say that they do so successfully.

Rodney O & Joe Cooley certainly had reason to be hopeful that “Veterans Day” would re-establish themselves and give them a leg up on reaching a whole new audience in the 21st century, but song titles like “Best Shot” are more apt than they intended. With a label like Kritical Records backing them, R.O. and J.C. were firing that shot with a child’s BB gun instead of a Colt .45 firearm. Guest artists like De Dope and Kodiak were even more obscure than the rappers they were sharing the spotlight with. To really establish this album on a wide basis they needed at least ONE West coast artist with some name recognition, say Ice Cube or W.C., and preferably he’d appear on their first single to maximize the value. A lack of compelling lyrical material also hurt their chances for success. While the group came a long way since the simplistic flows of the original “Everlasting Bass,” nothing found on Veterans Day gives them rank as top rhyme writers or punchline kings. The topic matter is predictable and redundant – varying from weak party songs like “Turn it Up a Notch” to protecting their rank and money stacks on “We Don’t Give a Damn.”

Nature is cruel – even species that improve through evolution can still face extinction. It’s much the same in the music industry. “Veterans Day” was the last chance the duo had to survive and they did not succeed. The bass may be everlasting but for Rodney O & Joe Cooley their career has been resigned to the dustbin of history.