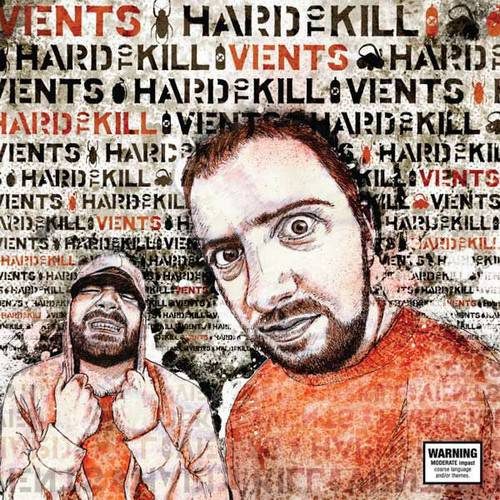 If one thing is for certain from the moment the laser hits the plastic on this release, it’s that Vents is the most aptly named rapper in history. You can feel the vitriol reach out of the speakers and grab your ear drums with both hands. For the album’s full 14 tracks not once does he let up, attempt to sweet talk or verbally caress the listener. Instead he bludgeons his raps home with a swaggering confidence which, it seems, it’s barely possible for one disc to contain. Vents is pissed off and tearing down mic booths is his release; whether it’s the government, police informants or just whack rappers they all get told their place with the same blunt onslaught. You’re left with the impression that if you ever spilt his pint, simply offering to replace it might not be enough to avoid a few months in traction. However I can’t think of anyone else I’d rather be stood next to in a riot.

However this is a debut album and while there a numerous examples of artists storming the scene in their first inning, this doesn’t quite rank alongside the “Illmatics” of hip-hop history. For all his conviction Vents can come off a bit one sided, you never get to see what’s beyond the outrage. Also his ability to give you a verse, let alone a whole song, with a cohesive topic is weak. He manages this best on “Travelling Man” where he raps either, a fictional tour of atrocities of the last two decades or one of the toughest autobiographies in hip-hop.

“1999, born again, Pakistan back in school
Roll with a tool thinking about God’s rule
Bounced to Kabul, something to live for, something to die for
White boy down by law
Word the fuck up, studied to kill
Physical stamina, leave your fatigued bloody for real
And I might have to, cause right next door
They murdering little kids, landmines in the floor”

The fact that I’m not sure how true to life the tale is, is a testament to Vents conviction in its delivery. When the third verse talks about time in Guantanamo Bay it seems improbable, but Vents is so wound up about it, it might just be possible. Much of the time however he skips from bragging, to calling out the government, to calling out fakes and frauds in hip-hop with enough regularity to make you wish he’d just elaborate a bit once in a while. It can leave all the songs feeling a little too similar. While this must go down a storm with the sweat stained, beer drenched masses of a club, it doesn’t stimulate quite the same way from your sofa. Vents isn’t the first rapper to stumble at this particular hurdle between blazing shows and putting together cohesive albums, which need to withstand repeat plays. He can be forgiven for this for now, as while in some people’s hands this formula would sound flatter than the dregs of last night’s six pack, the sheer force of his personality keeps it perfectly enjoyable to listen to from one track to the next.

Much of the variety is provided by the beats. Wisely they are mostly supplied by The Funkoar’s Trials who lends Vents some his best ever work. While Trials’ production on his own groups albums strays dangerously close to being cheesy, here he maintains a great balance between funky hooks and dark moody bass lines which suit Vents’ subject matter perfectly. Only Suffa drops the ball with his sparse beat coming off a little twee next to Trials’ moody monsters.

There’s something rather intangible about Vents that harks back to the golden era, when rappers took pleasure in simply rhyming to get it off their chest. There is a sort of free wheeling abandon which feels liberating in a time when many people are content to play the roles of thug, hustler or backpacker with little or no variation from the script. Vents doesn’t give you his whole story and in the end that keeps you interested. Plus anyone who can hold his head high while single handedly trying to bring back the unironic use of “word” in 2008 is all right by me.