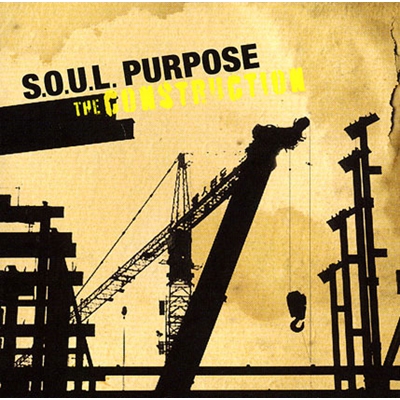 S.O.U.L. Purpose is the concept of one man from Jersey named Mazzi. The idea of S.O.U.L. Purpose is that Mazzi is the leader of this grand hip-hop collective, which is anyone that has helped true hip-hop music prosper (Yea, that’s right! You’re part of the group, too). This unifying idea strays from the regular beef-ridden rap. “The Construction” of Mazzi’s vision is realized through the long list of features that makes it onto this record: Murs, Poison Pen, Wordsworth and Immortal Technique, are a few that top off a who’s who list of underground ammunition that help perpetuate the LP. The acronym S.O.U.L. (Sense of Understanding Life’s) Purpose transcends beyond the ideological confines expressed throughout, but that is a expectation none can truly reach on a 18-track release. The more realistic goal of making a nice album front-to-back is in more plain view.

New Jersey has a rich history of rappers staying true to the craft, which unfortunately does not usually translate to big sales numbers (save for a few Redman albums). “The Construction” will not likely change that standard as it is certainly more focused towards true hip-hop fans–the purists. However, it is clear that Mazzi is a genuine article in terms of his love for the craft and perhaps a surprisingly rare good person (half the profits of the album go to various charities) in the industry.

The album quickly shows a heavy influence of soul music in the overall production, which is to be expected given the featured artist’s namesake. A good majority of the tracks have that soul, or jazzy feeling, as they ring with percussion, horns and vocal samples that exemplify the traits of the genre. “Tonelle Ave.” is the essence of how Mazzi wants to identify himself, as it is a reflection of where he is from and is emerged in these soulful ingredients. Maz depicts the streets he comes from with all of the verses on the track, which is common thing for a rapper’s anthem about his place of origin, but he distinguishes himself with a good amount of wit with lines like, “Old people, porches, gossiping on their beach chairs/To the old lady dragging bags, pulling on her bleached hair.” With this he sets a scene that differentiates from your standard bullets and drugs tales of the hood. Furthermore, you can understand his genuine love for his hometown despite his admittance that it is a place where “tax dollars are rarely ever focused.” His personality and flow walks the fine line between Louis Logic and Ill Bill (of Non-Phixion). The following track entitled “1&9” is another homage to Jersey with a darker tone, evoking the sounds of the latter comparison.

If these tracks do not win you over, both “Concrete Jungle” and “Boob Tube” will, in their own separate ways. “Concrete Jungle” is an amped up track that borrows heavy from Timbaland’s production style with its fast paced snares and also uses the classic lines from Grandmaster Flash and the Furious Five’s classic, “The Message.” The song would probably serve as the best choice for a commercial single. Meanwhile, “Boob Tube” cleverly uses the titles of TV shows to tell a story over a laid-back melody with many lines like, “What’s Happening, now?/ We in the set, Perfect Strangers/I’m in A Different World, channeling certain angers,” for example.

Surely Dirty Jerz’s Mazzi establishes himself as a capable emcee with the aforementioned tracks, but the real draw here will be the big time recruits that he brings along for the ride. Murs is nice on “Universal Condition,” a track that brings up the idea that the hood is a worldwide phenomena. Three of the most anticipated guests come on the final three joints on the album (bonus tracks) with mixed results. C-Rayz Walz gets the first turn and it is a track greatly hindered by a boring old school-inspired beat and his vocals seem to have a deeper tone than usual. Wordsworth gets things on a better path with “Dry Spells,” but it is overly perverse and misogynistic as the chorus repeatedly asks women to “spread them legs wide open” (which is also clear on “Porno Star”). Still, Words’ effortless flow is one of the most underrated in the game, not to mention his stellar punch lines. The real icing on the cake is “The Other White Meat” which reintroduces us to an Immortal Technique at his most venomous:

“…Faggots with night sticks giving brothers an enema
Cuz their racist–like classical Hollywood cinema
Systematically chasing our people and abusing them
Like the Romans genociding Jews in New Jerusalem
Guns don’t look like wallets, how the fuck they confusing them?
Losing them everyday and it’s getting me pissed
They barely admit that racial profiling even exists
But politicians still condemn it, sounding hypocritical
Innocent victims, getting statistically typical
I resist arrest, I don’t want to be taken alive
I’d rather die standing then live kneeling, broken inside
A cop stopped me once and cocked a loaded gun in my grill
And that’s the reason I have no fear of being killed…”

This verse will get even the most skeptic of Technique listeners (are there any at this point?) antsy for his upcoming full-length, expected to drop in late June. While Mazzi is a good rapper in his own right, he does not quite stand up to the elite when they are their on their A-game.

“The Construction” is an underground release that can unabashedly be recommended to any fan of the sort. Much like many that do not have a mega-budget, some of the production work may feel inconsistent at points, but Mazzi as a rapper and artist is pretty darn solid. With quality releases like this, it is easier to believe in a grand group called S.O.U.L. Purpose that is driven by the listeners that make this hip-hop music prosper.