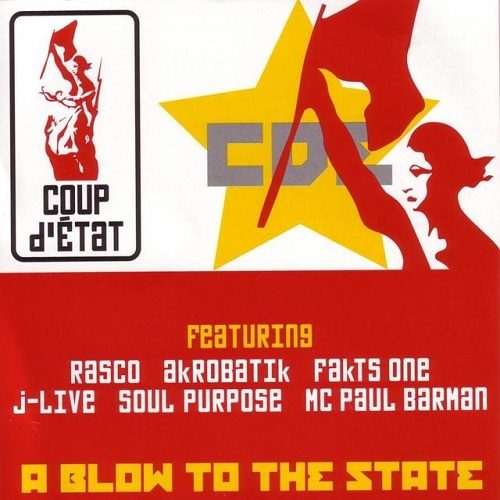 Various Artists :: A Blow to the State

Coup d’Etat Entertainment? Relax, it’s just a name. The only blow they’re going to deliver to any state is one aimed at the stagnant state of hip-hop. Something we should all be in favor of. It’s showcase time for the New York-based label whose biggest star, J-Live, has already moved on to yet another stage of his career. But as the information contained within this compilation indicates, Coup d’Etat aims to profit from the foothold it gained with “All of the Above” with upcoming releases such as Akrobatik’s “Balance”, Rasco’s “Escape from Alcatraz”, Soul Purpose’s “Breaking Records” and a variety of 12-inches.

“A Blow to the State” offers you an ear full of all these releases, including the lukewarmly received “Paullelujah!” by rap music’s reigning geek, MC Paul Barman. “All of the Above” gets double-checked, once with the challenging “How Real it Is”, where J dares you to “mess around and find out just how real it is” once you have to deal with “wins, losses, loyalties, promises,” etc. Taking into account the rebellious title of this compilation, you’d think the soul-stirring “Satisfied” would have been a more appropriate candidate, but at least the know-nots will witness some thrilling storytelling in J-Live’s second offering, “One for the Griot”.

But considering these cuts are old news and people with an inclination for the kind of music put out by Coup d’Etat will surely be familiar with “All of the Above” by now, the rest of this compilation holds more interest. It opens up with Akrobatik’s title track off his forthcoming “Balance” album, a dry Fakts One production and an analysis delivered by Akro that might very well encapsule the Coup d’Etat philosophy:

“There’s no balance in rap, you either nerd or a thug
you either got too many big words or bust too many slugs
You could study for years and be the world’s top scholar
but tryin’ to make the fans feel dumb won’t make ’em holler
[…]
Everywhere you look now shit is fucked up
Kids goin’ to school, they blowin’ the bus up
World War III is on the brink of reality
We kill the innocent and call them incidental casualties
How do we get some balance back in the mix?
With time for each other cause the government’s lunatics”

So fear not, this label’s output is well balanced. In fact, it’s so balanced they even got room for the quirky MC Paul Barman who will go from a biting holocaust reference like “gramps made a damn nice lamp shade” to constructing palindromes with rap names in less than 30 seconds on the Prince Paul-produced “Bleeding Brain Grow”. Arguably, Barman is way out there compared to the traditional style of someone like Rasco. On “We Get Live”, the Bay Area representative spits his sober vocals over a bare-stripped mid-tempo track concocted by Jake One, but the real banger is “Snakes in the Grass (The Jon Sexton Story)”, where Rasco gets even with his former boss at Copasetik Records, who apparently “tried sellin’ niggas dreams, but it’s all a mirage.” It gets way nastier than that, for those interested, “We Get Live” and “Snakes in the Grass” should also be available on a 12-inch. At least now Coup d’Etat knows they better not try to screw Rasco.

If this compilation is any indication, Coup d’Etat is (almost) as diverse as hip-hop music itself. From Akrobatik playing the mediator to Rasco dissing his ex-label, none of it may be particularly groundbreaking (with the exception of J-Live flipping the art of storytelling on “One for the Griot”), but every last track reps hip-hop tradition. Akrobatik pays homage to the DJ with some nice wordplay on “Strictly For the DJs”, newcomers Soul Purpose, who recorded “Lung Collapsing Lyrics Part II” with Percee P, the b-side to “Take Cover” (which is the one that found its way into this compilation), shine with the humorous “Dry Spells”. Rapper Mazzi makes his sexual frustration well known, but it’s guest Wordsworth who puts it best: “Dry spells is why I’m well rested a lot of times / bottomline: how you think I got a lotta rhymes?” Same way I got a lot of reviews?

Rounding this overview off, producer Fakts One laces the instrumental track “We Gonna…” and loops up a nice rocksteady groove for guest vocalist Rocklyn on the uplifting “Life Music”. In conclusion, “A Blow to the State” not only gives you an idea of what Coup d’Etat Entertainment is about, it also features a solid string of hip-hop tracks that, if not all-out subversive, have the potential to take those by surprise who think rap is only about dropping the latest brand names.