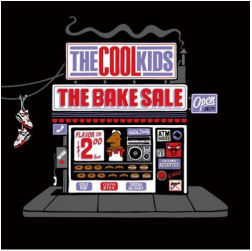 The Cool Kids :: The Bake Sale

Chicago is running rap right now, without a doubt: Kanye West, Common, Lupe Fiasco and now, quite possibly, the most exciting new hip hop act that hasn’t yet released an album, The Cool Kids. Of course, there are many other MC’s with various successes, but no other city has such a concentration of exciting and DIFFERENT rappers. The first three are already acclaimed as genre-blending and highly skilled artists, with the foundation of dope beats beneath their sneaks. The Cool Kids, with their cool name, cool subject matter, and seriously cool (also self-produced) beats, have become the most tip-worthy nom de jour by many publications, as “Ones to Watch in 2008.”

Consisting of Mikey Rocks and Chuck Inglish (the former from Chicago, whilst Inglish hails from the city that bleeds soul, Detroit), they met on MySpace and formed the most promising rap duo around. Chance meetings, talent and an ingenious management (that has seemingly reinvented the hype machine) have led to soaring anticipation levels. Couple this with their insane level of touring, plus song features on “NBA Live 2008” and hit TV show “Entourage,” and you start to realise that this truly is a lot to digest for ones so young (Mikey Rocks was born in 1988). Plus they even fit in a collabo with Lil Wayne – although he hasn’t exactly rationed out his guest verses over the last year. What is truly surprising is that, until now with “The Bake Sale EP,” they haven’t really released anything to the general public.

So, in summary so far, a couple of (actual) kids meet on MySpace, bang out some wicked songs, shoot a video for “Black Mags,” tour with huge artists playing to gazillions of potential fans, and become one of the most hyped artists around. All without actually releasing very much. Impressive. Well, this EP actually contains ten tracks, clocking in around the half hour mark, so we’re pretty much in Amy Winehouse album length territory anyway. Their subject matter isn’t guns, drugs and bitches – but that doesn’t mean that it is particularly varied either, mainly talking about clothes, bikes and anything that is retro-cool. That may not sound altogether appealing, but it works well enough within the confines of thirty minutes – especially when most of the beats are incredibly on point. “Black Mags” is the track that got them noticed by most, and the sparse yet funky bass that underpins their rap is the true star of the show. The sampled chorus of “88” (which poaches Nas’ “baseball bat/rooftops” lines from “Made You Look”) works so well, especially when you realise that one of them was born in 1988. The ultra-clever “click clap bass” of “What Up Man” helps them to stand out from the crowd even more, and after repeating the EP a couple of times, you start to get excited.

“The Bake Sale” is a near-perfect EP, insofar as it acts as an imperious album primer: not too long, not too short; it doesn’t give away everything, but displays enough to get you excited. There are occasional errors of judgment, such as “Bassment Party,” but that somehow manages to humanise them (even if their lyrics don’t). They seem to know when to simplify their flow and when to switch it up into a higher gear (in order to impress highly critical people like me), yet they appear to be holding their cards close to their chests, and saving the hottest songs for their LP. So, with their album “When Fish Ride Bicycles” allegedly coming out later this year, expect the hype machine to go into overdrive – especially if they can squeeze out a genuinely big single. It might seem like a lot of pressure to put on ones so young (and I might end up with egg on my face), but fuck it – this could be the start of a legendary rap duo. Stay tuned and don’t change the channel.