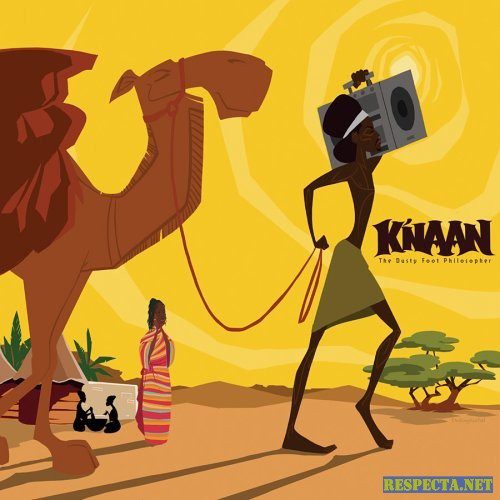 K’naan means “traveler” in Somali. It is exactly what he has been all his life.

After living amidst a civil war in an impoverished Somalia up until the age of thirteen, K’naan began a new chapter of his life by utilizing his talents to its full capacity as he wanted to rhyme for a cause. First moving to Harlem with his mother and brother, they later relocated to Canada to begin a new life. Using his rhymes and spoken word to demonstrate the lack of response to Somalia’s situation, K’naan performed for the United Nations High Commissioner for Refugees in 1999 and later sought after for the 2001 Building Bridges album project which exposed exiled artists from Africa. After teaming up with Jarvis Church and the Track & Field team in 2002, “The Dusty Foot Philosopher” was released in Canada in 2005 and now will be released in the U.S. as a “Deluxe Edition” featuring newly mixed tracks, a bonus track, and an accompanying DVD in late June 2008.

Compared to a mixture of Eminem and Bob Marley, K’naan delivers socially conscious hip hop while ensuring his message of a struggling Somalia are heard. His fervor and passion for his beliefs clearly run through his rhymes and messages. The message is clear throughout “The Dusty Foot Philosopher”-Somalia is in need of help. K’naan exposes his audience to a country few know about and the real life situations still occurring in Somalia. It is the truth and this is what he speaks.

With this in mind, “The Dusty Foot Philosopher” takes us on a journey about the past, present, and future of life in Somalia through the eyes of K’naan as he envelopes us in his story full of reality and hope. K’naan relives his life while living in Somalia through his spoken word and in depth lyrics while painting a picture to his prior existence he once knew so well. As he explains in the beginning of “My Old Home” that many people always ask about his life back in Somalia, K’naan addresses the wonderment by his fans and elaborates on his past. In a spoken words cadence, K’naan explains his old house, the local people, his neighborhood and as the beat breaks he unfolds the darker side the life once lived. The factualness in his lyricism about the violence and chaos that erupted in Somalia is what his “old home” once consisted of.

With rapid drums and heavy synths, K’naan’s message to criticize and challenge warlords who have pillaged Somalian soil comes to fruition in “Soobax.” Although there has been a great deal of controversy with this track and religious values, K’naan openly decided to shoot the video for it in Kenya as he still decided it was something that needed to be done regardless of the slack he was receiving. As it was almost impossible to shoot back in Somalia as he feared for his life, K’naan felt the heat from fellow Canadian emcees that would later attest that K’naan was trying to be a “religious entertainer who wants to be a life saver.” Amidst the upheaval drawn from “Soobax,” K’naan’s message is clear and concise as he shows that “soobax” simply means to “come out” as he pictures directly speaking in front of gunmen. A track that his brother even says K’naan could be killed for, in a different perspective “Soobax” instills the message of courage and fearlessness that many need to hear as he says:

“Basically, I got beef, I wanna talk to you directly, I
Can’t ignore, I can’t escape, and that’s cause, you
Affect me, you cripple me, you shackle me, you shatter
My whole future in front of me, this energy, is killing
Me, I gotta let it pour like blood, soobax:

Heavy electric and acoustic guitars summon “Strugglin'” as the slow beat enhances the message of the earnest effort for victory in an otherwise toxic environment. K’naan defines the true struggle of living in hostile areas while coping with the unrest of his country as he says, “Strugglin, and it’s troublin’, in this circumstance I’m dwelling in, I find myself in the corner huddling with some angry men and I gotta settle shit again before they gotta kill again.” K’naan also brings to light the fact that unfortunate incidences are only appreciated after the fact such as Hurricane Katrina, the war on terrorism, or the upheaval in Somalia in “Hoobaale.” With traditional sounds of Somalian strings and drums, “Hoobaale” begins with one of the best lines from K’naan to sum up the whole album as he says, “How come they fix the bridge only after somebody has fallen?”

Although K’naan is far from being liberated from the situation in Somalia, he remains optimistic that change will once happen. “‘Til We Get There” featuring emcee M-1 of group dead prez and vocals from Stori James, explains the possibility of living in a world full of equality. Despite the reality of it all that we are still not at that point, “Til We Get There” shows the impossible is in fact possible if everyone stands by one another as K’naan and M-1 play off each other’s rhymes as if speaking to each other about possible freedom.

Aside from the unrest in Somalia, K’naan delivers other poignant messages throughout “The Dusty Foot Philosopher.” With a fast beat and hard bass in “What’s Hardcore,” K’naan discusses how the meaning to the word “hardcore” has become somewhat skewed in today’s hip hop and youth K’naan shows that what most envision as “hardcore” isn’t even half of it as he says:

“I’m a spit these verses cause I feel annoyed
And I’m not gonna quit till I fill the void
If I rhyme about home and got descriptive
I’d make 50 Cent look like Limp Bizkit
It’s true, and don’t make me rhyme about you
I’m from where the kids is addicted to glue
Get ready, he got a good grip on the machete
Make rappers say they do it for love like R. Kelly
It’s hard, harder than Harlem and Compton intertwined
Harder than harboring Bin Laden and rewind”

The crux to “The Dusty Foot Philosopher” lies within the title track as K’naan explains what and who makes up that person. In a beautiful, poetic interpretation, K’naan unravels the mystery of “the dusty foot philosopher” who is “one that is poor, lives in poverty, but lives in a dignified manner and philosophizes about the universe” and who is represented by his old friend Mohamoud that was killed. Eloquent in his lyrics, his signature expressive nature describes a person who has “talked about things that well read people do and they’ve never read or they’ve never been on a plane, but can tell you what’s beyond the clouds.”

K’naan is an emcee like no other. His ideas of bringing forth an image beyond that of what is seen on television that merely depicts African and African children with dusty feet without knowledge is something he stands by strongly. In “The Dusty Foot Philosopher,” his lyricism and strength to enlighten those otherwise unaware of constant upheaval existing throughout the world has opened many eyes to the reality of it all. Without hesitation or fear, he has shown the truths behind issues that were once ignored while incorporating his own life experiences to exemplify the severity of the situation. K’naan has opened doors for emcees in terms of content while showing that speaking the truth is the best type of lyricism. His unmatched articulateness and talents as an emcee only enhances the ever so changing hip hop industry while showing that self-expression is the only way to live even if it means living as a “dusty foot philosopher.”