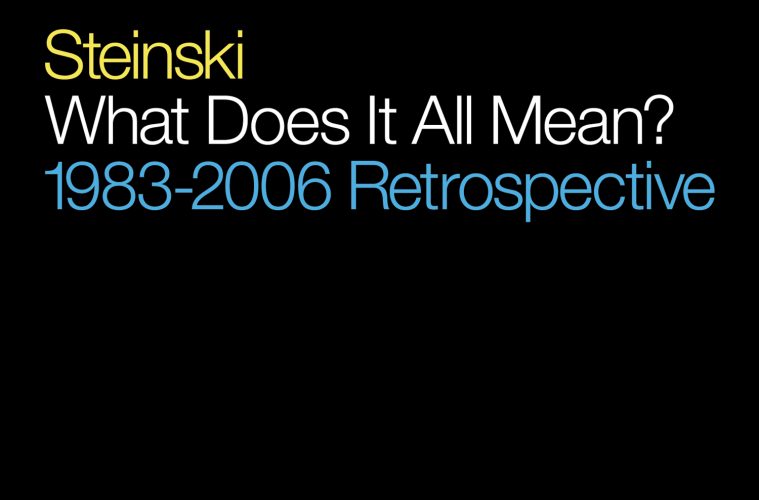 Steve “Steinski” Stein and Douglas “Double Dee” Di Franco came across their careers as DJs/musicians/culture jammers almost by accident. A friend showed them an advertisement in Billboard from Tommy Boy records inviting people to submit remixes of G.L.O.B.E. and Whiz Kid’s new single. Steinski was an aspiring DJ who worked in advertising, and Double Dee was a sound engineer who worked on commercials; they both had extensive record collections, an encyclopedic knowledge of music history, and the skills to translate their ideas into action. Their entry into the contest, “Lesson 1: The Payoff Mix,” was a huge hit, and has become one of the more sought after and revered singles in hip hop history. Steinski and Double Dee worked with over 24 source records, literally cutting pieces of tape together to create the finished product. It starts off with the G.L.O.B.E. track, but goes off into orbit from there, bouncing from “Apache” to “I’ll Tumble for You” to “Rockit” to “Stop In the Name of Love,” while chopping in snippets of “Casablanca” and instructional records. The end result feels like a five-minute tour through pop history, all the while maintaining a danceable beat. It got Tommy Boy excited, it got hip hop fans excited, and it still sounds good twenty-five years later.

“The Lesson” put Steinski and Double Dee on the map, and they followed it up with “Lesson 2 (James Brown Mix),” and “Lesson 3 (History of Hip Hop).” All three singles created a huge buzz, and all three were totally illegal. None of the samples had been cleared, and so the records technically couldn’t be sold for profit. Bootleg copies sold for forty or fifty bucks, and original white-label pressings fetch a hefty sum on EBay. The “Lessons” inspired a league of DJs and producers, from Prince Paul (who payed homage to “Lesson 3” on De La Soul’s “The Magic Number,” using many of the same samples) to Cut Chemist and DJ Shadow, both of whom recorded their own “Lessons,” and who performed the “Lessons” live together. Steinkski and Double Dee proved that sampling was an art form, and they represented hip hop at its post-modern, culture jamming best. Their songs were funky, they took unexpected left turns, and they were funny, slicing in bits from old noir films and the Marx Brothers. Steinski and Double Dee’s collaborations are rounded out here with their remix of “Jazzy Sensation,” and their tribute to the Sugarhill Gang, which serves not only as a fitting homage to the classic rap group, and an excellent compilation of their hits.

By the time the 1990s arrived, Steinski and Double Dee had gone their separate ways, but Steinski was by no means done making music. In fact, the bulk of this retrospective (nine tracks on Disc One, and the entire second disc) is music Steinski did without Double Dee. He took a slightly darker turn in the 90s, starting off with “The Motorcade Sped On,” which layers news clips and speech sound bites over what sounds like the beat from “Honky Tonk Woman” to tell the story of the Kennedy assassination. It could be a reverent homage to the slain president, but Steinski layers in things like Olive Oyl’s “Oh!” and Kennedy’s own “Ich bin ein Berliner,” which add an uncomfortable element of humor and whimsy into the mix. “It’s Up to You (Television Mix)” chops up sound bites from George H. Bush’s announcement of the original Gulf War to create a critique of the war. “I’m certain our cause is just,” says President Bush, immediately followed by another voice saying “a gallon of gas.” Steinski then uses clips from Mario Suavo and Jello Biafra to create a call to arms. It’s depressing how relevant this song sounds seventeen years later.

“Is We Going Under?” is a fiery, breakbeat remix of a Boom Boom Satellite track featuring Chuck D on vocals. “Ain’t No Thing” looks back to Steinski’s hip hop remix days, and “I’m Wild About That Thing” is a randy ode to sex. Disc One closes with the somber “Number Three On Flight Eleven,” which mixes audio from Betty Ong’s communication with air traffic control on that fateful day in September 2001. Unlike “The Motorcade Sped On,” “Number Three On Flight Eleven” is sincere, and incredibly moving. It also shows how much Steinski has grown during his career, becoming more of a sound artist than a mere remixer or DJ.

As interesting as some of his later work is, the real reason to own “What Does It All Mean?” are the first five tracks that contain his work with Double Dee. Anyone interested in hip hop history needs to own the Lessons, and this two-disc set is a lot less expensive than buying the original on vinyl would be. The fact that the legality of Steinski’s work is in question (the label called Illegal Art, after all) makes this even more of a must-buy. Who knows how long these things will be on the shelves. Disc Two makes the package even that more compelling, adding in a mix Steinski did of rare and not-so-rare hip hop, which runs that gamut from old school stuff to Nelly. The only thing that prevents me from giving this collection a “10” is the fact that it is a little uneven as a listen. The later material isn’t quite as strong as the early stuff, and the very nature of this being a collection of remixes means that it doesn’t flow together totally cohesively. Those complaints aside, anyone who claims to be a fan of hip hop needs to own “What Does It All Mean?” Simply put, it is an essential document of hip hop history, an interesting collection of sound art, and a lot of fun to listen to as well.