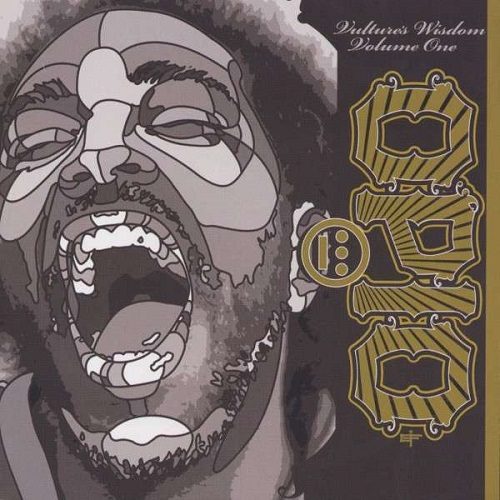 Opio’s “Triangulation Station” was a breath of fresh air in 2005 and an album many people are still sleeping on today. This writer is not prone to give out “straight tens” lightly for a rap album, yet the impeccable beats and rhymes of that solo album proved Opio could record an epic opus for the masses worthy not only of the Hieroglyphics high standards but of my own. Rare is the album you can pull out on any day, randomly select any track from, and instantly be transfixed by the dopeness of the artist. “Triangulation Station” showed Opio to be as intelligent as he is articulate, as vocally nimble as he is lyrically dexterous, and to be blessed with a team of friends and producers capable of showcasing talent with superb production.

With such lofty standards to live up to and a long three-year hiatus between albums “Vulture’s Wisdom, Volume One” has the potential to be doomed to failure by comparison to successes of the past. Opio is not lacking in confidence though – in fact he has recorded THREE new albums for upcoming release and “Volume One” is just the first chapter in the trilogy. Hmm. Trilogy. “Triangulation.” Opio does seem to like things that come in threes. Perhaps it’s somewhat odd then that the # of tracks on this album is not divisible by three, although there’s certainly the possibility the total amount of songs between volumes will be at the end. In fact this press copy is so far in advance of the August 2008 release date I can’t even say for certain the tracklisting won’t change before then. The press kit included with this disc notes the retail version will include a bonus DVD with seven music videos and “animated shorts.” Regrettably said DVD isn’t included here and can’t be covered in this review.

“In the midnight hour to, shower you
Urge you to pollinate her flower – OOH!
That’s not how I do, I keep my shower cap on
Or she can use her power tools cause me I’m not about to lose
The falcon need a snowman, that’s how she do her program
Manipulate a grown man – I barely even hold hands!
Thugged out slow jams with R. Kelly singing?!
See that ain’t me though”

Opio’s not just flipping old beats new ways though, he’s busting straight up fresh Left coast Hiero ish for your eardrums. The minimalistic “Don Julio” brands Opio a suave master of life AND rhymes while declaring himself “an anti-hero, a prince among thieves” in today’s world. Opio is equally comfortable on the heavily layered “To the People,” an echoing musical landscape with multiple melodies and sound effects straight out a game of Asteroids. It almost goes without saying when Opio declares himself an “Original Lyricist,” but even if it’s obvious you can’t hate on him for saying as he toes lines with the deftness of an NFL wide receiver keeping one foot in on a touchdown. Op’ switches up topics with ease, bouncing from carnal pleasures like weed, beer and sex on “Call Girls” to serious lyrical exercises on songs like “Vice Versa” where he vows relentless pursuit of his goals:

“Me I dig the written rhyme, live in crime
Stomach always empty so don’t tempt me or it’s dinnertime
You in the dinner lines with a ribbon tied around a prime rib
like this, Smith & Wesson to your spine, gimme mine!”

When you stop to examine Opio’s wordplay for a moment it’s truly remarkable how he interweaves multiple rhymes in and out of bars, how he visualizes metaphors in cinematic ways the audience can relate to, and how he keeps his composure despite flipping so many concepts and syllables. I’m jocking, I know that’s hella obvious to the reader, but there’s no question that Opio is one of the top rappers in the game today and “Vulture’s Wisdom, Volume One” shows he hasn’t lost a step. Credit where it’s due, give it up to The Architect too, who produced all the tracks on this advance copy and didn’t ever come sloppy. While it’s nearly impossible to top “Triangulation Station” (go cop it if you haven’t already) there’s little question that Op’s still dope on “Vulture’s Wisdom, Volume One.” He’s so damn good at his craft he fools you into thinking his freshness is effortless, when in fact this album reflects the dedication of a serious MC who doesn’t let his commitment to greatness get in the way of expressing a wide range of emotions in a wide variety of situations. The wisdom Opio shares on “Volume One” is that of an extraordinary MC with the ability to relate to ordinary man through dope hip-hop songs, and the only way to knock this album is to say that 39 minutes of Opio just isn’t enough – it leaves the listener as hungry as the rapper himself.