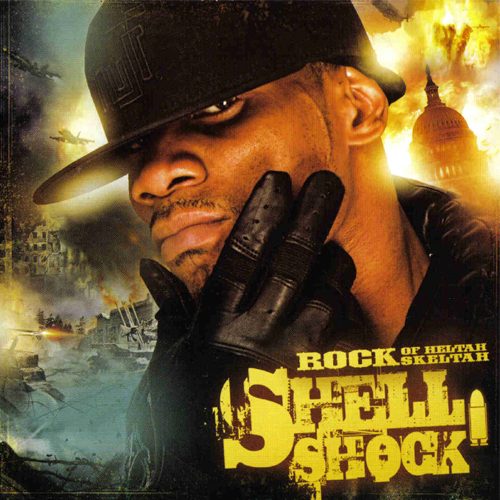 For a dude whose career has been called washed up and non-existent, Rock certainly has created a buzz behind his latest release. I am surely not implying Rock’s recent attempted murder charge was a publicity stunt, but the timing of the unfortunate criminal charge couldn’t have come at a better time (not that there really is a good time to catch an attempted murder charge). While Duck Down Records has been experiencing a resurgence the last couple of years, Rock was one of the last members of the Boot Camp Clik to take advantage of newfound popularity. When he finally decided to get back into the booth, an attempted murder charge and the fascination such a charge creates amongst the young and impressionable have assured the man has gotten more press than any of his label mates. Rather than contributing to the media’s glorification of crime, I’ll focus on Duck Down’s revitalization of the mixtape game. For a while the mixtape game was dead since most DJs were shook by the DJ Drama arrest. That lull in activity only lasted a few months before the market flood returned at record levels. Unfortunately, it seems only the most non-DJing DJs decided to return. Since then we’ve gotten almost no actual DJing on mixtapes and have had to settle to what are essentially street albums presented by someone who calls himself a DJ. To be honest, the street album/mixtape is nothing new here in Texas since almost every major Texas rapper started his career with such projects. The difference is that guys like Slim Thug, Chamillionaire, and Lil’ Flip treated their street albums/mixtapes more like a retail album — promoting the release and charging retail album prices. In their case, since they usually delivered retail album material it was never a big problem. Duck Down has decided to follow this formula and Rock’s “Shell Shock” is the latest in their “Official Mixtape” series. Though you do have to shell out a little more dough for these projects, you do get a better overall product and don’t have to worry about finding some shady website or bootlegger to get your fix.

If you’re familiar with Heltah Skeltah then you know Ruck and Rock complimented each other because they sounded very similar. Sure, you could tell them apart â€“ but much like M.O.P. you knew you would be getting the same consistency and vibe from both emcees. In that respect I can say listening to a Rock mixtape is much like listening to a Sean Price mixtape. By that I mean you get the same commanding voice spitting street raps with a humorous/lyrical twist to them. I also surmise that like a Sean Price mixtape, a Rock mixtape isn’t as dope as a Rock album would be. The tracks with unoriginal production range from the boring remake to the outright brilliant. “Tempmurda” is the outright brilliant track as Rock flips Snoop’s “Murder Was The Case” and lets us know how he feels about his attempted murder hype:

“Here we go with the same old story
Another rap nigga fall from grace and glory
That shit corny, so let me paint a different picture for you
This shit could be up in the Guiness Book of
World Records for comebacks
Nobody in the world was checking for bummy jack, now the world’s a legend
I done clapped some cat, I got the world’s attention
Hopefully I can teach the world a lesson — Stupid Motherfuckers!”

It’s good to hear a rapper not trying to glorify his alleged criminal exploits and ridiculing the media for their obsession with crime. Another interesting remake is “Rockzilla” where Rock flips Pharoahe Monche’s only hit single â€“ “Simon Says.” The boring comes when Rock gives 50 Cent’s “I Get Money” the old college try as his verses are much too lyrical and street for the hype beat â€“ seriously, that beat needs nice and simple lyrics. The original tracks get points for being original but don’t come near reproducing the energy of the jacked tracks. “Fuck Dat Rapper” should have been the blazing precursor to Da Incredible Rap Team (D.I.R.T.), but is just your typical mixtape track with a repetitive beat and hook. Tracks like “Flytime” and “Rite Back” feature beats that are a little better, but ultimately Rock’s raw lyricism and ill flow are the main reason to listen to the track.

Boot Camp Clik was never the crew to be concerned with catchy beats, but even like “How Many Emcees” still possessed that special something that made them stand out. None of the beats on this mixtape really stand out, which is a problem if the trend continues on the album. Of course, Sean Price’s mixtape also lacked in the beats department but the man has been able to avoid that problem on his albums. Another complaint is that most of the guest rappers on the album sound very wack next to Rock. I’m not saying they are wack — they just sound wack after hearing Rock on the same track. Basically, if you’re fiending for that lyrical, hardcore NY street-hop then Rock is the man to serve it to you, but while the main course is dope be warned that the side dishes just don’t cut it.