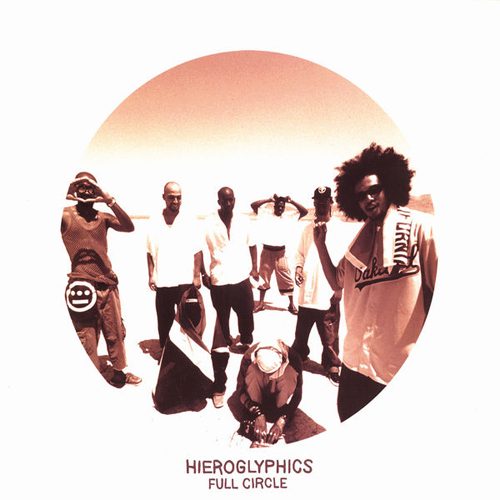 When rap historians look back on the 1990’s, the rise fall and rebirth of the collective called “Hieroglyphics” will be recorded as among it’s most significant events. This irony can’t be lost on a crew whose name evokes the image of Egyptian symbolic transcription. Like those ancient scholars, the group sought to preserve their wisdom for future ages, but their method of recording used beats and rhymes instead of paints and chisels. From their earliest writings on Del’s “I Wish My Brother George Was Here” to the papyrus scrolls Souls of Mischief spit on “’93 ‘Til Infinity” to the phoenix risen testament to indie greatness “Third Eye Vision,” few crews in this era were as significant or influential. In fact one could argue NONE were more important to hip-hop than the Hieros.

The Hieroglyphics are far from ancient history in 2003 though. Individually they have achieved some success in the 21st century. Souls of Mischief reformed to release “Trilogy: Conflict, Climax, Resolution.” Pep Love released the critically acclaimed “Ascension” and became a Hiero star on par with Del. Speaking of whom, the eccentric rapper achieved Dr. Octagon-esque dopeness with his “Deltron 3030” release, while simultaneously working from “Both Sides of the Brain” in impressive fashion. While these albums cemented the Hiero legacy, others seemed to show that the foundation was slowly breaking under the pressure of a bling-bling obsessed audience. Tajai’s “Projecto 2501” album put the ‘O’ in ‘obscure’, Casual’s much anticipated “He Think He Raw” album was surprisingly mediocre, and their founder and chief architect Del seems to have gone off the radar ever since appearing in the concept group Gorillaz.

“Full Circle” is the first album to reunite the whole Hiero collective since the legendary “Third Eye Vision” release. One would think this is all that’s needed for the members to regain their focus and come tighter than ever, but something’s missing here – dopeness. When “Third Eye Vision” was released, it was not just the album of the moment, but an encapsulation of everything that made the group dope. Solo freestyles seperated tracks that themselves were so fresh they could have each been released as singles. From “You Never Knew” to “Oakland Blackouts” to “After Dark,” the songs seperated themselves from the limitations of three-dimensions and became timeless. It may be too much to expect a follow-up album to achieve such fourth dimensional qualities, but even on a standard comparing it to other Hiero releases of the past thee years, “Full Circle” suffers.

A lot of factors are to blame for this let-down. Musically the group used to produce it’s way into greatness, with each member contributing to the sonic landscape on their own tracks and for the other MC’s, with only Domino and Jay Biz functioning exclusively in the music department – and did they ever function at it with excellence. This time however the group is not firing on all pistons. Domino is out of sync, with songs that are occasionally fresh like “Powers That Be” and occasionally even stellar like “Make Your Move” featuring Goapele, but often sound as drab as “Shift Shape” or half-hearted as “Classic.” The latter is an ideal example. Individually it has parts which should result in dopeness – a sweet loop of wind instruments, respectable bass, and solid drum claps, but yet when weaved together it becomes mediocre, repetitive, and muddy. It’s hardly surprising that Del sounds bored, and that he jumps so quickly in and out of the song you might miss him if you blink. He recaptures some dopeness on the simplistically nice “Let it Roll,” but completely misses the mark with the official finale “7 Sixes.”

The other musical contributions are a mixed bag at best. A-Plus busts one of the best songs on “Chicago,” with a lightly strummed guitar and a strong beat that gives his brethern heat and ironically makes it into a song that’s more Souls of Mischief than Hiero. Opio’s “Heatish” on the other hand will leave you cold, as it’s trying hard to be dope by being absurd but just leaves your ears hurting (as if bad rap punchlines found within like “I DDT any Randy Savage acting Macho” didn’t already). He does redeem himself with “Halo” though, so props due on this light and refreshingly spirited track. In fact, “Love Flowin” might be his rise to ascension (no pun intended to Pep Love) as it’s the only thing on “Full Circle” which comes close to being anthemic. Casual obviously didn’t learn not to produce his own songs, as his “100,000 Indi” buried guest Abstract Rude in a dour work that wants to be Middle East but can’t even catch a flight out of LAX. A-Plus succeeds in killing off his previous mojo on the mediocre softcore “Maggie May” and “Jingle Jangle” is some Space Boy Boogie’s idea of dope which doesn’t belong on this planet or in this solar system.

Lyrically, the membership used to be rap’s tightest, but when you’re forced to endure less than stellar beats it’s hard not to notice that some rappers make stronger contributions than others. Del barely weighs in at all and the fact he makes no impact when he does may be this album’s biggest downfall. When he does flow, he sounds heavily medicated. Drinking may make Ol’ Dirty crazier and more dope, but whatever Del’s on is clearly not conducive to him being a Funky Homosapien. It’s not surprising that Pep Love is still rolling strong off his previous success, and it’s him and the Souls members (A-Plus and Opio in particular) that are the glue binding this project and keeping it from spinning wildly out of control. What may be the strongest condemnation of this album though is that none of the lyrics are contenders for a hip-hop quotable. That used to be a given on any Hiero affiliated album, but here they seem to be going through the motions. Occasionally a song hits on a good theme or narrative, but none of the verbiage leaves you saying “OH MY GOD THAT’S DOPE” like it should be.

To say this is a whack album would be somewhat inaccurate. A Hieroglyphics album would have to try far harder than this to be bad. Simply said though this album pales compared not only to the other great indie rap releases of 2003, but next to their own catalogue of work. Someone needs to find out what happened to Del, why Domino is slipping so badly, where the hell Jay Biz is (not a single track on this album) and why Casual can’t leave beats alone and stick to what he does best – rapping. In fact in Del’s absence Casual should have been carrying the weight as the other elder statesman of the Hiero crew, but he fails to deliver. So does “Full Circle,” an album which in fact only comes about halfway around and feels far from complete. The dedicated fan will purchase it, but the rest will wait for something better.